What You Can Learn From The U.S. Gov.’s Disastrous Hiring Process 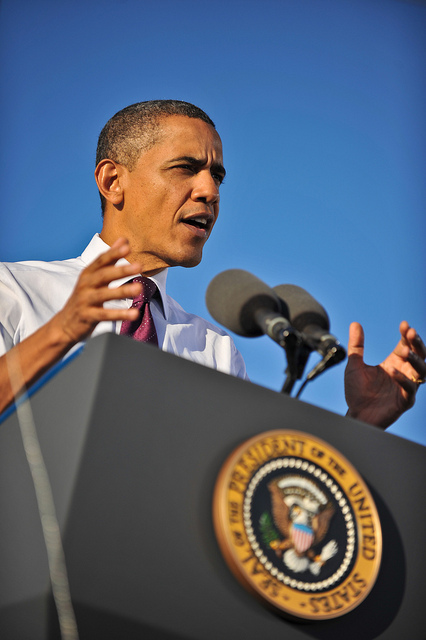 President Barack Obama has vowed to make the government “cool again” and enticing to work for, but numbers suggest otherwise. Credit: Wikipedia Commons

The average federal employee makes $78,500 a year and is a recipient of a benefit package almost unheard of in the private sector, including a generous retirement package and good healthcare coverage.

The federal government offers jobs where people can truly make a difference, like figuring out ways to help schools to understanding the mysteries of space, something cited by many as something they want out of work. And turnover is incredibly low as well, with USA Today finding that federal employees are more likely to die than get fired.

Sounds like a great deal, right? And yet, despite all those advantages, the federal government is having a very difficult time attracting young people into their workforce.

The Washington Post reports that just 7 percent of all government workers are under the age of 30, the lowest total in nearly a decade. That number is particularly disappointing considering there has been an increased effort by the government, particularly President Barack Obama, to recruit younger people to the federal government and a poor economy for 20-somethings overall.

Why is the federal government doing such a bad job attracting young people, despite offering strong salaries and benefits? There are a lot of reasons, but it starts with an outdated hiring process that is about as user-friendly as another famed government service, the DMV.

The federal government’s hiring process is described as lengthy, impersonal and uninformative. For example, even strong young candidates are reporting that they send in their resumes, only to get a computer-generated rejection letter six months later (lawmakers are hoping to fix that by proposing laws to make government hiring more efficient).

More than that though, despite Obama and others talking about hiring younger people, the government’s hiring process appears to favor older, more experienced workers. Specifically, the requirement-based approach the government takes to hiring favors people who cumulate years of experience, something obviously difficult for younger people to accomplish.

There seems to be little effort by federal employees to change that. Lisa Danzig, the associate director for personnel and performance for the White House’s Office of Management and Budget, told The Washington Post that few senior government workers put any effort into recruiting at all, believing it is solely the responsibility of human resources.

“Many government leaders don’t see it as their job to bring in new employees,” Danzig told the Post, adding, “We want to get [leaders] more involved in recruiting.”

Bill Clinton instituted an internship program in 2001 that made for a streamlined hiring process for bringing on young people. While it was popular with management, federal unions complained, arguing that it circumvented proper hiring practices.

Obama agreed, scrapping the internship program in 2010. The president has since installed a new “Pathways” internship program to attract young people to government, but many government workers allege the requirements associated with the program are complex and the process cumbersome, and few people have actually been hired using it.

A bad hiring process is one thing. A bad employer brand is even worse.

The problem is two-fold. First, the American government right now is incredibly unpopular, and leaders have done things like freeze pay and cause furloughs via government shutdown to push away candidates. Second, many complain that the culture within federal government offices is innovation-stifling and unattractive to young people.

The unpopularity of the government itself is a huge determent to attracting millennial workers. After all, who wants to want to work for an entity that has a 15 percent approval rating?

The 2013 government shutdown – which effectively furloughed more than 800,000 federal employees – and a three-year salary freeze hasn’t helped either. All of that has dropped has morale of government workers to the lowest point since at least 2003.

“Their processes are too bureaucratic,” 32-year-old Anthony Cotton told The Washington Post, describing the culture within a lot of federal government offices. “This is where you go to make your career die.”

Also, because federal workforce is heavily unionized, promotions have a tendencyto be based more off of years served, as opposed to performance. That can be particularly frustrating to younger employees, who now more than ever crave the ability to quickly move up within an organization.

The federal government is a perfect example of what not to do, from a recruiting perspective. The hiring process is brutal, the leadership is unpopular and the culture is one of “pay your dues,” as opposed to a meritocracy where the best ideas win out.

The federal government is also definitive proof that the secret to hiring great people isn’t achieved by offering good salaries and great benefits (although that doesn’t hurt). The real secret is meaningful work where people feel challenged coupled with leaders with vision who support their employees.

As an American taxpayer, I’m disappointed that the federal government isn’t more millennial-friendly, particularly as it tries to figure out ways to lower the unemployment rate for millennials. However, for private enterprises, it is good news, as it leaves more talented, hungry young people for everyone else.

The key is getting it. Start by figuring out what the federal government does, and then doing the exact opposite.

VoiceGlance is a hiring tool used by forward-thinking companies to hire smarter, instead of harder. Learn more here.