WhatsApp Group Chat – Should Recruiters show eagerness to Candidates till the Offer Release Period to negotiate the CTC?

There has been a lot of talk on the importance of engaging Candidates from the immediate point of contact to the on-boarding stage and the challenges that Talent Acquisitionist’s face. We’ve covered a range of topics that address various challenges similar to the one mentioned.

Having, said that we @SourcingAdda are constantly striving to resolve new challenges that Talent Acquisitionists face. We hold discussions every Wednesday which are quite popular and informative thanks to the initiative of our members. the discussion focused on, “Should Recruiters show eagerness towards Candidates after their selection up till the offer release period to negotiate the CTC harder?” upon the suggestion of our Mumbai Group Member Anshul. We’ll be disclosing the chat shortly but before that don’t forget to view the key take away pointers right after so here goes… 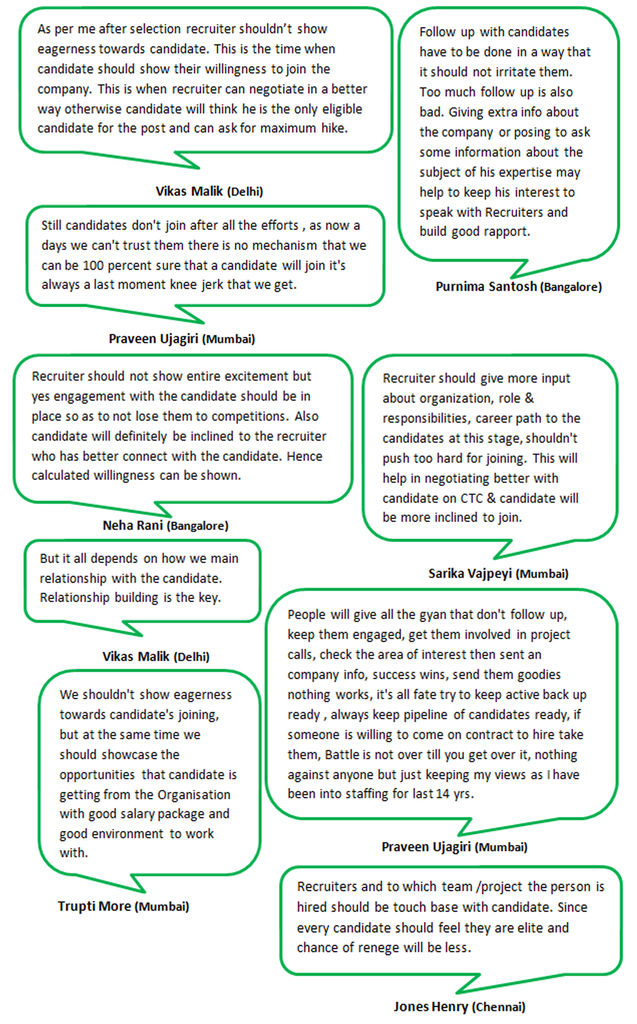 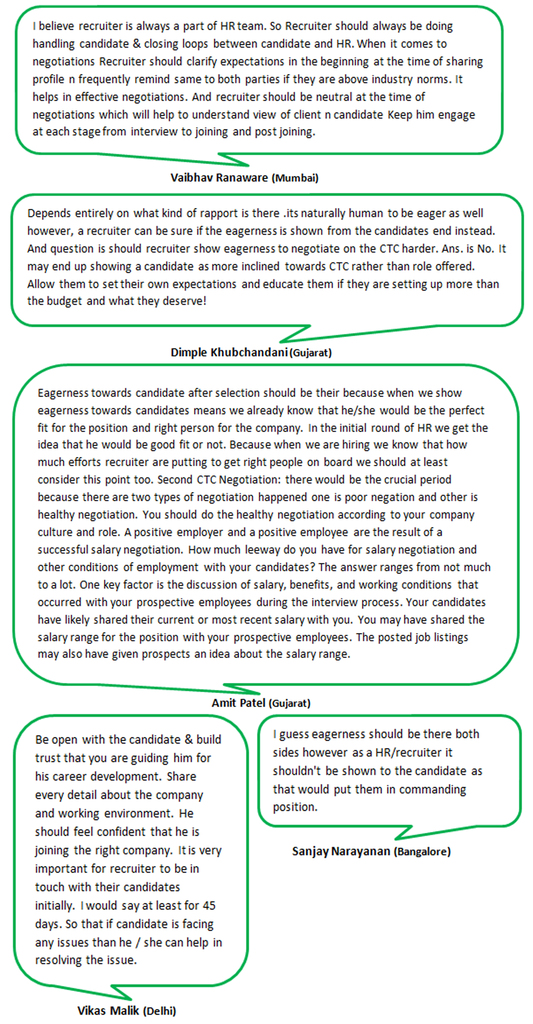 The very informative discussion ends here and we’re sure your eagerly waiting for the key take a ways to facilitate learning and retain what you’ve learnt.  Therefore let’s not keep you waiting so here goes…

Who should show Eagerness

If eagerness is shown by the Recruiter a Candidate is likely to think that they are the only one eligible for the post thus they have a tendency to ask for the maximum hike.

Recruiters shouldn't push Candidates too hard to join as this enables them to re-negotiate better on aspects like CTC where Candidates are more inclined to join the organisation.

Recruiters should showcase the opportunities that the Candidate gets at the Organisation by highlighting a good salary package and environment to work in.

When negotiating; Recruiters should clarify expectations in the beginning when the profile is shared and both parties should be frequently reminded about it.

Recruiters should be neutral when negotiating as it helps to understand the view of the Client or Candidate.

Keep Candidates engaged at every stage right from immediate contact via phone to the interview up to joining and even post joining.

Its human nature to be eager however, a Recruiter can be sure about the Candidates decision provided the same eagerness is replicated from the Candidates reaction.

The Ans. to the question at hand is No, as it may result in you showing a Candidate that they are more inclined towards the CTC rather than the role offered.

It is essential that Recruiters allow them to set their own expectations and help them to realise that they’re asking for a budget i.e. more than what they deserve.

The negotiation stage is the crucial period because there are two types of negotiations that are held namely; poor and healthy negotiations.

It is very important for a Recruiter to be in touch with their Candidates initially so that they can address any issues or challenges a Candidate is facing and help in resolving them which is an added benefit.

Follow ups with candidates have to be done without irritating prospective Candidates; too much follow up isn’t good either.

Even posing to ask them information about the subject of their expertise may help to maintain their interest which can result in them continuing to speak with the Recruiter which also builds a good rapport.

Candidates will definitely be inclined to a Recruiter who they have a better connection with hence; relationship building is the key.

If nothing works; keep an active back up ready, always keep a pipeline of candidates ready, if someone is willing to come on contract to hire; take them, the battle is not over till they are on board.

Know that even after all you’re efforts; candidates still may not join

You need to know that you can't trust them since there’s no mechanism that will give you a 100 percent surety that a Candidate will join.

We’ve received an out pour of inputs where several perspectives and aspects were covered right from the obvious Recruiter perspective, a Candidates perspective to solutions that may work, facts that we most often forget or don’t realise. And if you’ve read this far you know what you’re missing out on. So why not join the group; become an active rather than a passive learner as you’ll get inputs covering topics like the Impact to the Naukri Monopoly due to Randstad buying Monster.

To get real time updates to our upcoming events and activities you only need to follow us @SourcingAdda. You can be a part of the group by simply sending us a DM via Twitter @SourcingAdda or you can leave your requests to join the groups along with your views in our comments section.