What you know about Internet Resume searching is wrong

Do you use search engines to look for resumes on the Internet? Do you use exclusions such as "-jobs" or "-submit"?

If you do. Stop it. Read on and I'll tell you why.

First a story about Easter hams.

To understand what I am going to say about searching for resumes, you will need to be in the right frame of mind. Here we go...

A little girl was closely watching her mother prepare the Easter Ham. She was… Continue

The future death of social networking

The future death of social networking

Social networking is going to die. This article is about how it will happen.

The focus for this article will be business social networking. If you are worried…

The Apple AppStore has over 100,000 iPhone applications. Verizon's Droid is a a few months old and Google just launched the Nexus One. Microsoft has Windows Mobile and the Palm has the hot new Palm Pre. The current king of Mobile Business is the Blackberry (RIM), but it is losing ground fast. Apple, Microsoft, Google, Palm, Verizon & RIM all going after the same market and that makes for great headlines.

Webinar: The NEAR and far FUTURE of recruiting. Donato Diorio presenting

Take a Break from work, this webinar is all about having some FUN! The Near (and Far) Future of RecruitmentI

Venues into the future; the future of Contact Information

The definition and very nature of contact information is changing.


Why is this important? If you are not able to connect with people, you cannot sell to them, you cannot recruit them, you cannot market to them. As I talked about in the video intro, things are changing. If there was a contact information historian, it would be me.

What gets me irritated is when something gets reported as the "next best thing", when in reality, it is simply, the… Continue

Win a ticket to ERE. 2 lucky winners will get full conference passes ($1200 value) and one lucky winner will also get $400 towards either their flight or hotel. Watch this video for details.

See you at ERE!

Contact Capture is now available free for the Blackberry & iPhone. This video shows a real world example of how a recruiter can save time getting contact information on your mobile device...without using those darn tiny mobile… Continue

I'm not above shameless self promotion. I am just absolutely excited about our new ProfilerX product. Video is below. ProfilerX combines the real-time contact information from the Internet combined (and mashed up) with our new partner, Hoovers. This is a 1 + 1 = 7 solution. Worth looking at for anyone who has ever reviewed Broadlook, Hoovers or both.

Want to see if live for yourself? I am giving a series of live Sneak Peaks over the next week.… Continue

Looking for a recruiting domain? Here are 5700, unregistered!

Shorter domain names are better. One syllable words are simple, short, and memorable. This weekend I was looking for a domain name for a new project I was working on. Everything I initially tried was taken. What I did know was that I wanted to add a one syllable word to the end of my “anchor word”. It had nothing to do with recruiting, but for this example, I will use the anchor word RECRUIT.

I needed to create a repeatable, semi automated process to conquer this task. Here is what I… Continue

Companies and the minds within them evolve over time. I have experienced it firsthand in founding Broadlook Technologies and steering its growth over the last 6 years. Core competencies change, competitive landscapes change, opportunities come and go and through all this there is your corporate identity and messaging. There is internal messaging, external messaging and... 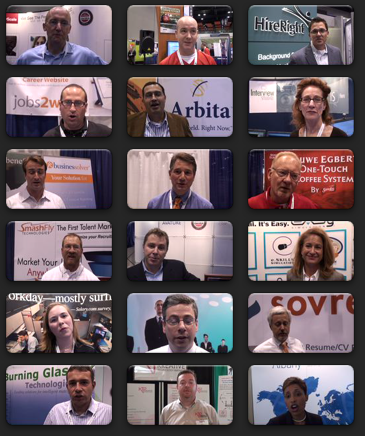 A few years ago, a man with a polite demeanor and accent that I couldn't quite place made it to my extension at Broadlook. He should not have. It was rare that my door is shut; a sign to my staff that I was not to be bothered. I was working on the specifications for the 2.0 version of Broadlook's Eclipse tool. On the call was Russ Moon and I decided to give him a really hard time as he broke into my fortress of solitude. I did give him a hard time, but he was persistent and we eventually had a… Continue

Driving Back from OnRec...thoughts on the fly

Getting drive time with Dan Hughes (Broadlook co-founder) always gets my mind going. After seeing a horrendous traffic jam, which I avoided, I thought of an analogy to describe what Broadlook brings to the market. Here is… Continue

We are excited to announce our new Licensed Professionals Recruiting Package (LPRP). While we are still putting the literature together on the Broadlook corporate website. Here is a preview video. What you will see: a high impact recruiting software for any type of recruiting that involves licensed… Continue

I was recently speaking with my friend Ami Givertz and he asked me about technology that excites me. With this question, I realized that technology does not excite me; its the changes and possibilities that technology brings that excites me. In addition, I’m less excited the day I release a new product, than the day it was conceived. The discovery, the chase, the debate; this is bliss. By the time it is realized, I’m already building something… Continue

Does being an LION (LinkedIN Open Networker) give you the excuse to be an idiot? I’ve made some great connections recently via Open Networking, however, it has it’s drawbacks.

I’ve recently received a barrage of LinkedIN invitations from, well, idiots. They may be nice people, but some people should never turn on a computer. I thought that everyone knew that when you send email to a distribution list that you shouldn’t put everyone’s email in the TO: field …right? I mean this is like… Continue

LinkedIN quality is dying. I am part of the problem. Solutions in hand.

Recently I’ve been diving into social networks with an interest in automation. Don’t get me wrong, I get a good deal of business from LinkedIN, but I worry about it’s future.

I have to thank Dave Mendoza and Jason Davis as being great examples of leveraging networks. I’ve used LinkedIn from early days, but only recently have I started adding connections en mass.

In the past few weeks, I’ve been adding 1000+ LinkedIN connections per… Continue

Visit Broadlook at ERE and get a massage

Looking forward to meeting many of you at ERE in San Diego. Stop in and get a massage.