A few years ago, a man with a polite demeanor and accent that I couldn't quite place made it to my extension at Broadlook. He should not have. It was rare that my door is shut; a sign to my staff that I was not to be bothered. I was working on the specifications for the 2.0 version of Broadlook's Eclipse tool. On the call was Russ Moon and I decided to give him a really hard time as he broke into my fortress of solitude. I did give him a hard time, but he was persistent and we eventually had a productive conversation once I realized he was not going to give up.

Today, I'm glad I took that call and that southern accent is well known to myself, my wife and the staff at Broadlook. Few people bring value every time they call and Russ Moon is one of those rare people. So it is an honor to announce that Russ moon is the first non-Broadlook employee to achieve Broadlook Black Belt status. The Black Belt is part of the Broadlook Certified Internet Researcher (BCIR) program. As Russ will tell anyone who asks, his tool of choice is Broadlook's Eclipse. He's been heard many times saying "I use Eclipse and it's game-over".

In order to get inducted into Black Belt status, Russ had to show my staff his proficiency with Eclipse, a tool that is easy to use the basic functionality, but requires time, ability and dedication to master.

If you've met Russ in person, you know that he is a larger than life character. I joke with Russ that he is like a super hero of sourcing. So Russ, this ones for you and thanks for breaking into my fortress of solitude. 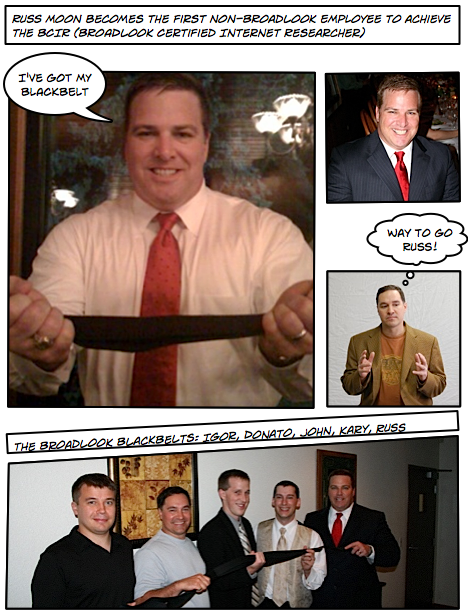