It is getting slower out there. Over the past four months, growth rates of US job postings have been on a slide downwards with the latest addition in May of only 2.1%. Employers posted a daily average of 2,600,000 job openings (estimate) during the last 30 days, just 55,000 more than in April. Four of the five largest metro area posted gains. Employers in the New York Metro area added just 1.0% while the Los Angeles job market remained virtually unchanged (down 0.4%). 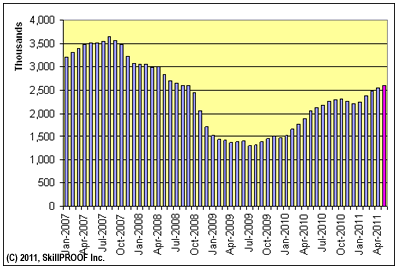 If we interpret job postings as a short term outlook of employers on the economy the numbers suggest that employers are becoming increasingly cautious to look for additional labor. According to the BLS, the US economy added 768,000 jobs this year so far with April being the month of highest growth. It may be less exciting when the BLS publishes it's May employment report on Friday.

I realize there are some recruiters here doing fabulously well and who're immune to the corporate sector economy's jobs shrinkage environment, really, over the past 10 or so years since the previous recession.  I'm not one of them.

Attempting to adapt finding new markets, new clients to survive/prosper has been challenging.  The larger corporate sector employment paradigm is unquestionably one of increased positions created overseas with fewer here in the US.   Asia/India have 3 Billion people many moving into the middle class with jobs offshore outsourced to them and are the future revenue stream for businesses.  The question remains which companies will provide them their goods and services and where will those employees be employed.  My bet is overseas as it's cheaper for companies to do business there and more expensive here.

IMO, until we lower our cost of doing business in the US through reduced taxes, government mandates, and regulations while increasing the cost of doing business overseas eliminating tax incentives to offshore outsource, eliminate H1's, remove ourselves from the World Trade Organization, eliminate magnets for illegals to come here, and regain our national economic autonomy through trading through a position of strength I can't see where we don't, as a nation, become 3rd world going bankrupt.

Clearly we are going through some major changes here in the US, most of it brought on by ourselves. Excesses, waste, overspending in not only corporations but local governments and all the while losing sight of the global changes.

Remember even 10 years ago, leaders in the Auto Industry not willing to accept the future of Auto industry in China.  Underestimating global competition was rampant.

Manufacturing is coming back to some extent and it is getting cost efficient to make it here (as cost goes up in manufacturing overseas and shipping, cost of quality)

We just have to adapt or be left behind.

Bottom line is we've lost roughly 5 million corporate sector jobs since 2001 and created roughly 3 million overseas--and those are conservative estimates I've read.  Shows the US, and Western Europe, don't appear to be the end destination of where upper and middle class jobs will be created.

"Today’s ADP National Employment Report suggests that employment growth slowed sharply in May. Employment in the nonfarm private-business sector rose 38,000 from April to May on a seasonally adjusted basis."

The report is published here: http://www.adpemploymentreport.com/

There is a sudden slow down and no one quite what it is causing it. Higher oil prices, japan tsunami, middle east democracy movements, could all be factoring in.

As a market, here in the US, we were consuming like crazy and that could not go on for ever. 16 million auto market is now down to 12 million and I don't think we will ever reach 16 million for some time. Auto companies have downsized and are making money at these volumes. The market in China, India, Brazil or other developing nations are growing because they were never affected by the downturn here in the US and they are all in different phase of their growth. I don't see anything wrong with US companies hiring over there to meet local demand, similar to Toyota , Honda setting up shop here in the US.

As long as corporations invest in new technologies here in the US, there will be need for talent here.

At least I hope so..

I have my doubts.  The trend is fewer US employees, more overseas employees by US companies.

After economic downturns in the early 1980's, 1990's, 2000's-which have affected this whole decade, I've seen employment paradigm shifts each time since my recruiting career began in 1980.

End game I see in the US, much like Western Europe, is eventual relocation, merging, or acquisition of US companies overseas nearer to where their future revenue streams will be.  The growing middle classes of Asia/India and then to other emerging markets such as Brazil, Russia, Bangladesh, Peru, Bulgaria, Vietnam will be the 21st century story as we become more like present day Britain, France, and Spain.

They are becoming like us, and we're becoming like they were.  Our cost of doing business is too high, government spending bankrupting, and as our economic climate worsens there'll be more demand for government services/programs for the un/under employed subsidized by a shrinking number of people/companies.  Too many receiving, too few paying.

Combine this with illegals streaming across the border that we subsidize educationally, health care, and incarceration wise and it's like allowing an unlimited number of people in your house which YOU have to support.

Unions have killed much of manufacturing employment, offshore outsourcing killing our corporate sector employment undercutting us on wage, illegals killing blue collar/entry level/retail sector employment for US citizens undercutting them on wage along with high taxes, government mandates, and regulations..........we'd need a Japanese economic/political Tsunami to set ourselves back on track.

Just my five cents of prognostication

I take Metro Detroit as an example of how in the early 1900's, the region was thriving with the Auto Industry with many small entrepreneurs venturing out. Towards the end of the century, we had become a society dependant on the Big 3 for jobs and lifetime employment. Unfortunately, this dependancy in many ways lulled folks into sleep. Also, the world was changing rapidly and folks were not keeping up..China became the largest Auto Market sometime last year.

We still have a great platform to work from and as long as folks are willing to learn and move forward, there will be opportunities. We better teach our Kids to Earn being # 1 in the World and not assume they are already #1.

Comment by Henning Seip on June 2, 2011 at 11:36am
CNNMoney: "Psssh. That's the sound of the air being sucked out of the job recovery. All eyes in the financial world are on the government's monthly labor report due Friday, hoping to see that the job market continued to grow in May."

Comment by Henning Seip on June 3, 2011 at 8:55am
BLS released its report this morning: "Nonfarm payroll employment changed little (+54,000) in May, and the unemployment rate was essentially unchanged at 9.1 percent. Job gains continued in professional and business services, health care, and mining. Local government employment continued to decline."

Comment by Suresh on June 3, 2011 at 9:37am
The economists were way off on their prediction for May. They should have talked to Job Board owners, who may be able to predict this better.