Telephone Name Generation - A Perfect Example of the Global Economy At Work.?.

I wound up running into a conversation on ERE today that looked pretty interesting. It's from a really smart guy, Jeff Weidner, who I respect greatly and see as a key contributor to the future of value-added strategic sourcing thought leadership as we move forward. "How low can the cost of a name get?"

As I often say, I'm really happy to have seen RBC grow as I don't post too much on ERE nowadays as I question the site's objectivity, propensity to allow members to be publicly blackballed, and the fact that I too often see people's ideas pulled from a post and then winding up in a 'feature article' shortly thereafter . . . however there are some really cool people on there that I like to interact with and share ideas with. I think of it like going to a dingy, old, run-down pool hall that you wouldn't otherwise go to except for the fact that you know some cool people that head over there sometimes.

a. With COGS rising due to crude oil and the degradation of the U.S. Dollar (in addition to reduced B2B and consumer spending as a result), demand is tremendous to reduce costs within the supply chain. In our case, it's removing inneficiencies and excessive costs from the recruiting process.

b. Training firms, through the power of web e-commerce, are willing to sell to anyone in any economy if they're willing to pay the going price for the training. If 'Johnny' in the U.S. and 'Sandeep' in India go through the same TNG (telephonic name gen) training and employ the same tactics, however 'Johnny' charges $40 per name and 'Sandeep' charges $5 per name . . . who do you think will get the business (at at least the first shot) more times than not?

What has resulted from all of this? It's simple - more Telephone Name Generators in emerging economies that are willing and able to support Recruiters for much lower cost. My observation is that U.S. based TNG training companies have, by their very nature, created SUPPLY in emerging economies (where $1 USD goes much farther than here in the U.S.) to meet the DEMAND.

The point of any company (yes, training companies included) is to create profit and shareholder value. Because of this, the more training you sell (not just here in the U.S., but worldwide), the more revenue and profit you create. Therefore, the more SUPPLY that is created in emerging economies through the training, the more the cost-per-name is degraded.

It's part of the reason that Wal-Mart hasn't seen a significant reduction in U.S. sales despite our current economic woes . . . even with ~90% of their products from China, Americans still go because the cost is lower than the alternatives.

I'm sorry that you have had such a negative experience with ERE.net. Although I vehemently disagree with the characterization, I know what you are referring to with the blackballing. The rest is kind of mystifying to me.

I'm glad you've found a place that you are more comfortable with here on Recruitingblogs.com, and I know that you will continue to find some great conversations here. If you ever want to have a discussion, you can give me a call any time at 212-671-1181 x801.

Comment by Joshua Letourneau on June 26, 2008 at 2:27pm
Dave, I appreciate you reaching out. I'm just an honest guy that loves RBC because of the level of honesty and frankly, you don't run into the blackballing and non-objectivity when it comes to presenting new ideas. We've needed a higher level of honesty and mutual respect on a network for quite a while now, and it means a lot to be a part of something healthy over here. With the sake of sounding cheezy, it just feels good to be here . . . like a great relationship where we can be ourselves and not worry about being bludgeoned for presenting an alternate viewpoint or making an observation that challenges the 'Sacred Cows' that many will so vehemently protect in an effort to preserve the money trail.

Over here, you can say what everyone always wanted to say (or present an idea that doesn't fall lockstep with the 'experts consensus') . . . without having the fear that exists on other networks that has resulted from watching so many true pioneers get excommunicated or bloodied for. See, terrorism has no place on RBC.

I haven't seen your presence here much, but I welcome you and would love to see you adding some value in the form of content or ideas in the future.

Comment by David Manaster on June 26, 2008 at 2:54pm
Thanks for the welcome Josh, but I've been a member of RBC since May of last year, and I participate whenever I see a conversation that interests me and to which I can add value. I speak to Jason about the site daily, and we regularly bounce ideas off each other about the future.

I'm going to stop responding to the non-objectivity and dishonesty comments and just let them go because I don't really understand them, and don't really get how you can refer to a community of thousands as dishonest. 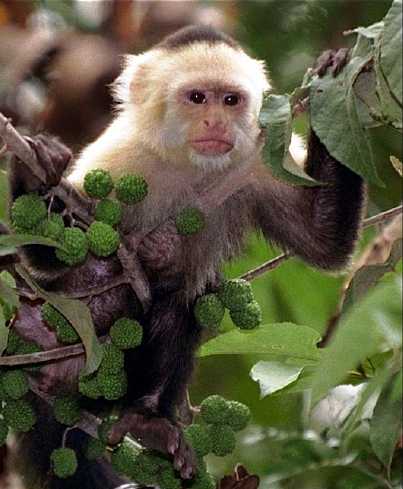 "How you can refer to a community of thousands as dishonest" - ? Nice :) Ya gotta love an attempted Freudian projection, but suggesting that anyone is questioning any one single person's honesty (not to mention that of an entire network!) is pretty out there . . . even to a Capuchin Monkey (even the little guy above has come out of tree on that one!)
What I'm overtly & directly suggesting (meaning I'm 'straight-up' suggesting) is that there is no level of fear here (of being excommunicated and/or bloodied) and the dialogue is awesome because we can be honest with one another. Social media has changed the face of what "community" and media-deliver mean today.

C'mon - you know what I'm saying. This place brings more to the table than any other network out there right now . . . and is only in its infancy. Even you admitted the rampant blackballing on other networks, so (speaking mano y mano) you know exactly where I'm coming from.

As far as you being a member since 5/2007, you have me beat by a long shot (to say the least) when it comes to 'RBC tenure'. I just looked at your profile and saw your single RBC blog post dated May 18, 2007 about Monster. . . but I don't see any discussions started (or any responses outside of that to my post today) . . . so that's what I meant when I said I haven't seen your presence here much. I mean, call me crazy . . . but that's not a lot of activity (and I don't mean that negatively; I'm just keeping it real) - so when I say that I'd love to see you "adding value", I mean like . . . well, adding value (like ideas, thoughts, conversation pieces, etc.)

Sorry if this comment may be tough to stomach, but RBC is now "The Spot" among the true movers and shakers of our space. I didn't make it this way . . . I'm just happy to be a part of it :)

If you want some synapse-firing to go along with the morning coffee, RBC and Fistful of Talent are where it's at!

Comment by David Manaster on June 26, 2008 at 4:23pm
I'm trying pretty hard to keep this constructive Josh, but so far all I've got from you are vague accusations and a monkey picture.

I'm a big fan of both FoT and RBC, and I think they have terrific futures.

I would encourage you to think about how quickly you ratcheted up the level of accusations in this line of conversation, and that kind of behavior that might contribute to a negative environment in any forum.

Thanks for the conversation.

Comment by Joshua Letourneau on June 26, 2008 at 5:23pm
Dave, you are only seeing what you choose to see . . . and you're reading what you choose to read. In the words of Robert Mcnamara, "Seeing and Believing Are Both Often Wrong." The monkey serves a point - the failed Freudian projection volley woke him from a slumber so he's decided to take a closer look :)

I wouldn't call my statements on "objectivity, propensity to allow members to be publicly blackballed, and the fact that I too often see people's ideas pulled from a post and then winding up in a 'feature article' shortly thereafter" as vague in any way (and I wouldn't call them accusations from an NLP perspective . . . "facts based on repeated occurrences" would be more appropriate.) Also, stating that you've only blogged on RBC once in the last 13 months isn't an accusation - it just is what it is; a fact.

You are well within your rights to admit to the rampant blackballing while vehemently disagreeing with my other statements. At the end of the day, I'm just what Seth Godin would call a "sneezer" who isn't afraid to tell the world why I find RBC superior to other alternatives. After all, it is . . . and everybody knows it. The issue is brand awareness . . . which I see to be progressing at a healthy clip.

I appreciate your advice about ratcheting "up the level of accusations in this line of conversation", and would like to offer a piece of my own for you . . . but in the true sense of honesty, I don't think you would listen to me or hear it . . . or as you yourself have stated, "really understand."

Anyway, I appreciate you coming to the table in this, more honest, social media setting . . . Let's simply agree to disagree about the superiority of RBC and move on.

Now, if you have any thoughts on TNG and the Global Economy, I'm all ears and would love to hear what you think (honestly).

Comment by Joshua Letourneau on July 1, 2008 at 9:53pm
Chris, good idea :) Hey, I'm always game for a good debate, although a neutral ground would be preferable - I'm guessing it would go something like this.

Perhaps the topic could be TNG in the Global Economy . . . :)