2015 Industries with the Most Growth

Now that we’re into 2015, we thought we’d compare how demand in the beginning of this year trended compared to the same time last year. We reviewed the top 50 industries with the most demand to see which ones experienced the highest percentage of growth, according to data from WANTED Analytics.

Industries with the Most Growth 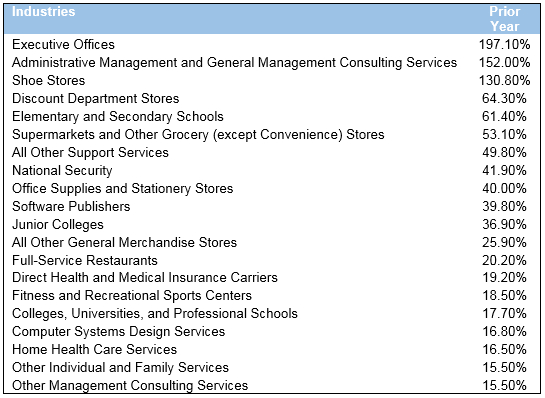 The executive offices industry was leading the list of the industries with the most growth, up 197% in January 2015 compared to January 2014. Executive offices, which falls under the public administration sector, refers to chief executives and their advisory and interdepartmental committees, as well as offices controlled by mayors, governors, city managers, county supervisors, and The President. National Security was among those listed above and this industry also falls under Public Administration, which is up 46% year-over-year as a sector. State of South Carolina, State of Ohio, and the Department of Workforce Services had the greatest increases in demand.

Industries in the retail trade sector appeared in a number of spots, 5 out of 20. This sector had the greatest number of job ads posted online during January 2015, with shoe stores and discount department stores growing at the quickest rate. The retail sector also added the most jobs to the economy in January, according to the Bureau of Labor Statistics Employment Situation Summary. All other general merchandise stores, which increased 27% year-over-year, had the most openings in the retail sector.

Educational services industries appear in 2 spots listed above. Colleges, universities, and professional schools had the highest number of job ads of the industries with the most growth. The professional, scientific, and technical services sector was also represented in a few spots above. This sector continues to be listed in the BLS Employment Situation Summary as one of the sectors with the most jobs added to the economy each month. Administrative management and general management consulting services, which falls under the professional, scientific, and technical services category, had the second most ads of the industries listed and the second highest demand growth.

Does the list above match your expectations? Did any of these results surprise you?

This article originally appeared on Analysis, a WANTED Analytics blog.

Ashley Zito Rowe writes for the WANTED Analytics blog, Analysis, and her wine blog, NJ Wine with Me. Ashley’s articles and insight have been featured on or cited by Forbes, HR.com, ERE, American Staffing Association, Philly.com, GetOutsideNJ, and Hometown Quarterly. She is also a Marketing Manager for WANTED Analytics, focusing on customer and social media engagement. When Ashley isn’t researching hiring trends or drinking NJ wines, she’s likely to be adventuring somewhere in NJ, painting something, or watching Disney movies.