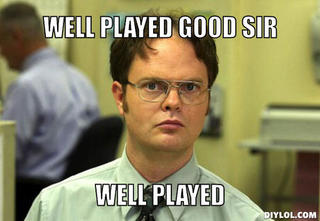 Man did this ever ruffle feathers… a small company in San Diego is hiring not ONE but TWO awesome developers. Instead of bothering with a laundry list of must haves and educational requirements, they dropped an F-bomb laden missive on Craigslist targeted at a certain kind of developer. You know, the kind that has a sense of humor.

Now I will admit that the sheer number of naughty words in the ad did make me a little squeamish. I have quite the potty mouth myself, but I’m working on it I promise. It was still all a bit much for me. Let’s set that aside for a moment and talk about what I LOVE about the ad –

Finally, I love that the hiring process is laid out. Literally step by step, and what happens next. There are even tips on what not to do. Wouldn’t it be GREAT if we could all be that transparent? I know a lot of my recruiting brethren were put off by this, and I get it. It’s not for everyone, including some developers I know. That said, my ONLY critique is the over use of the F-bombs. My opinion? The company still would have made a splash for all the reasons mentioned above. Then again…. It’s got a ton of people talking and sharing the ad, and when you’re trying to hire developers that’s not a bad thing.

F'n awesome and unique :) but would wonder about the employer as well with this type of ad.  Maybe that's what it takes to get really good talent in a tight market?

it's not for everybody that's for sure Christopher - I think the right kind of dev who would be happy in this environment will find it hilarious. Plus they're getting TONS of free press because we're all sharing and talking about it!

I love to make jokes and laugh and make others laugh, but I doubt I would want to work at a company like this.  I'd want to have a very serious idea of what the company's mission is, what their competitive advantages are, why the opportunity would challenge me, what I will learn, etc.  While I think the job ad is original and creative, I would be floored if any of my clients (serious as they tend to be) would ever run an ad like this.  The problem is that running this ad even once brands the company as "jokers"....  It will be interesting to see if the company succeeds.

It's good if it actually does attract the kind of candidate they're looking for.

I'm all for honesty in job postings, especially if they are transparent about the tough parts of a job. It's always a balance between really selling a job, and being honest about what that product is and who it's suited for. Personally, I read it as far too... bro-y (for lack of a better term), and I suspect it might turn away some people who might do great work for them.

After all, their PPS states they don't endorse or encourage excessive profanity in the workplace -- and yet, here is this ad. If they're hypocritical on the very first point of contact, it doesn't speak well for them as an employer.