Yesterday, I took the family on our first trip to the beautiful new Washington Nationals ballpark, simply named for now, Nationals Park. More on just how great of a ballpark this is in a moment...

I don't know about you, but as a Recruiter, I can spot a recruiting-related ad from a mile away. So when I enter the men's restroom after we get inside the ballpark, what's the first thing I see, you guessed it. You know the nice reading material the place on the walls in public restrooms these days, usually the day's Sports section or some sort of advertisement? Nestled between ads for Harris Teeter and RE-MAX, was a recruitment ad for the Scottsdale, AZ Police Department. That's right, an ad in the mens room at a baseball stadium in Washington, DC to go work for a municipal police department in the southwest US.

When I thought about it though, it kind of made sense, and the desert scenery in the ad looked a bit appealing on a cool, drizzly, overcast 60 degree day in DC. The ballpark is bound to get alot of tourists this summer too, so it isn't there just for us DC locals. Was the ad just for men? I can't say if the ladies room had the same ad, I'd ask my wife, but she probably wouldn't of noticed anyway. Is the Scottsdale Police Dept. advertising in mens rooms in ballparks around the country? If you have seen an ad like this at your local sporting venue, please let us know here.

So, yes, it was a bit odd I think to see that ad in that location, but kudos to Scottsdale's finest for their efforts to attract candidates from around the country.

As for the ballpark, if you live and the DC area and haven't been, or will be visiting our Nations Capital this summer, I strongly encourage you to take in a ball game at our fine new stadium. Get there early so you can play Guitar Hero III or MLB: The Show at the Strike Zone; watch your kids play at the playground' grab beer at the Red Porch and watch batting practice; grab a Half Smoke at Ben's Chili Bowl or a Cheeseburger at Five Guys; Get seats in the upper deck on the first base side for great views of the Capitol, Washington Monument, and the monster-sized scoreboard; don't miss the President's Race during the middle of the fourth inning; and if you have kids and go on Sundays, be sure to stick around after the game so the kids can run the bases. Oh, and even though they say take Metro, we drove in and got a great spot in a garage four blocks away. Once the neighborhood gets develpped, going to a Nats game will truly be a spectacular experience.

We had a great time at the ballpark yesterday. Hey, and we beat the Cubbies too! You know what, I wonder what it would be like to be a cop in Scottsdale? Pretty hot I would have to guess. Guess I'll stay here in DC. Check out a couple pictures from yesterday below: 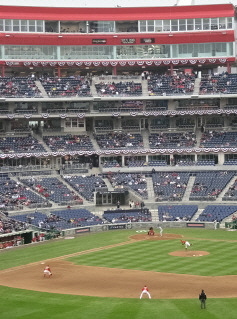 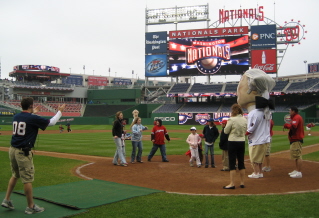 Great post! I'm going to the St. Louis Cardinals game tonight, and will make sure to look around the ladie's restroom for any similar ads. Maybe I'll even ask my date to look in the men's restroom for me (since I'd get kicked out of the ballpark if I tried it myself). I'll keep you posted and let you know what we find.

Comment by Ben Gotkin on April 29, 2008 at 3:45pm
Heather - How's it going? Enjoy the game tonight and I look forward to hearing back from you. Great to hear from you again!

Comment by Steven Rothberg on April 30, 2008 at 5:30pm
I'm not so sure that recruiting or advertising of any type in a bathroom makes sense. Yes you get eyeballs but so much of what makes an advertising campaign a success or a failure is what that campaign is associated with.

It wouldn't surprise me if an employer would refuse to run even a free job posting on Craigslist because of the, ahem, unusual offers that run on that site. Yet that same employer would run an ad in a bathroom and be associated with everything that goes on in there. I just don't get it.

Comment by Ben Gotkin on April 30, 2008 at 9:09pm
Yeah, and you know, you see enough advertising everywhere as it is these days. Can't they leave us in peace even just for a few private moments... :-)