Is There a Pedophile In Your Cubicle?

Author’s note: Names and places have been changed to protect the guilty and the innocent.


Things were humming along just fine over at Company Z. Until, that is, after the company picnic.

Over the weekend, the company picnic at Tilden Park in Berkeley near Wildcat Canyon was a great success, well planned, well-attended, with all kinds of fun and games for adults and kids alike. There were pick-up softball games, touch football, a chance to dunk the execs, pie eating contests, face painting for kids, clowns, balloon twisters, and on and on. In short, everything that an HR Assistant could think up, turned up.

There were food stations spread out across the reserved area, from hotdogs and hamburger stands, to chips, salsa, fruit and salad, pasta and assorted breads, scones and pastries, to ice cream and dessert buffet tables. Everyone had seconds and thirds, and even the dogs who who were lucky enough to come to the picnic got tons to eat.

Then Monday came along, and Calvin, an inveterate web surfer on his lunch break stumbled upon California’s Megan Law website listing convicted sex offenders in the area. Within a few clicks Calvin found himself in the offender locator site, searching his zip code, and holy shit! Mark, his cube mate and fellow design engineer is right there on the sex offender web page, staring back at him, his mug clear as the text on this screen, complete with his description, list of offenses, tattoos, scars, marks and known aliases. 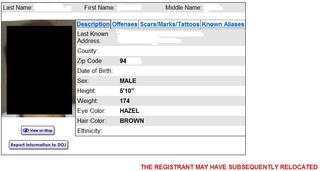 Calvin was livid! He and his wife had brought their 5-year-old daughter and 8-year-old-son to the picnic, and because he and Mark had been cube mates for the last 5 years, working on the very same engineering projects, Calvin didn’t think much about letting his kids play with Mark.

Calvin marched into the engineering director’s office with the sex offender page printout, interrupting his phone call, and demanding action.

Then the director of engineering marched over to the general manager’s office with Calvin’s sex offender printout and demanded an emergency meeting.

Next the GM and the director of engineering marched into the HR Manager’s office with the sex offender print out and ordered immediate termination.

My first thought was, “Whew, thank God I wasn’t the recruiter who found him!”

The HR Manager, under fierce pressure from the engineering director and the GM, reported back to the parent corporation about the situation.

The parent corporation determined that there were no grounds for termination since the offense happened seven years ago, and Mark had not re-offended. However, the employees, whose children were at the picnic, were up in arms by the middle of the week, and would not be pacified. They wanted a hanging, and nothing short of a public burning at the stake would quiet the uprising.

The HR Manager was under fire to do something. Sex offenders are restricted from residing or being near school grounds, parks or where large numbers of children are found. By the end of the week, the solution was clear -- terminate on the grounds of parole violation.

Mark was fired, and Company Z went back to normal.

What are YOUR thoughts about this?

Comment by Donald L. "Skip" Conover on February 18, 2008 at 3:43pm
Sad but true that such events can happen. Best to check the website before hiring.

There was a case in the early days of the AIDs epidemic, which had a similar ring. A pathologist in a hospital realized while studying a specimen that one of his doctor colleagues had AIDs. He called his wife, and said to her, "Guess who has AIDs!" He told no one else. Within 1 hour, the doctor/patient in this case was terminated from his privileges at the hospital. The doctor/patient then sued the hospital and the pathologist for breach of his confidentiality, and won. You can imagine all of the downstream repercussions.

The message? Proper due diligence is essential at every stage.

Comment by pam claughton on February 18, 2008 at 5:07pm
I don't know. If you check the website before hiring, isn't that discrimination? In this scenario I think it is sad that the person was terminated, as he hadn't re-offended in the entire time he was with the company and it clearly didn't impact his performance. Maybe the solution would have been for hr to check the website AFTER hiring him, and simply not allow him to attend any events where there would be children. That seems the fairest solution for all. This person, the pedophile is mentally ill, and it doesn't seem fair to penalize him for something he was already punished for.

Comment by Donald L. "Skip" Conover on February 18, 2008 at 5:23pm
Aren't we always "discriminating" when we make a hire. I think that due diligence is always required and permissible.

I don't think the company should be enforcing his parole. But fore warned is fore armed!

I'm compassionate toward the man, and don't think a "paid for" crime should necessarily be a deal breaker on a job, but I think it's the wise company that has all relevant information on an employee. If something had happened to the child of one of my legal clients, while at the company picnic, you can be sure that I'd be serving papers on the company.

Comment by Karen Swim on February 18, 2008 at 6:59pm
The crime of pedophilia is particularly troubling and one that at present does not have an effective solution. The reality is that while we all hope for rehabilitation and re-entry into society, how many people want to live or work near a pedophile even one who has not reoffended? I believe that the recent wave of violence will bring a new wave of laws for private and public institutions. Companies,schools, and universities are likely to face increased pressure to know more about the people in their workplaces and campuses. I have mixed feelings about the termination but definitely think the man should not have been allowed to attend the company picnic. There simply are no easy answers to this one. Thanks Maya for such a thought provoking discussion.