Can you guess in what country people lie the most about their salary? 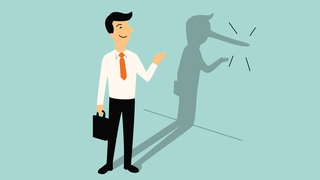 An international survey asked 64,000 respondents from 45 different countries about their honesty during a job interview. Specifically, they were asked to indicate whether they mention the real salary they earn in their current/previous job or choose to overstate it. Not surprisingly, it shows that many individuals misstate the actual amount. In most of the cases they choose to overstate their current salary with the hope that their new (potential) employer will match or even exceed that amount.

Worldwide there are great differences between countries and regions. The number 1 on the list is China (incl. Hong Kong), where 63% of all people overstate their salary. This was followed by Chile (62%) and Mexico (54%).

Top 10 biggest “liars” when it comes to salary overstatement.

If stating a higher amount really can bump up your salary, is everyone doing it? Are recruiters and prospective employers just accepting the fact and deducting a certain percentage off the stated amount? The simple answer to both those questions is “no”. Although some may not lose any sleep over it, many others will feel morally inclined to be honest during a job interview. In fact, there are several counties where the great majority of the people is completely honest about what they earn. The country that leads in being mostly honest is Vietnam, where 84% mentions their current salary exactly as it is. Norway takes the second spot with 83% and Lithuania comes in third with 82.6%.

Top 10 most honest countries when it comes to salary indication.

Aside from the moral argument, there may be several cultural aspects that determine this degree of honesty. The discussion of salary tends to be a taboo topic in some countries like the Netherlands, Germany and Austria. Americans, on the other hand, are relatively transparent and open about discussing their salaries. This greater transparency, may call for more honesty because of the fear of information leaking. Also, knowing that there are great consequences and repercussions to being “caught” can motivate greater honesty.