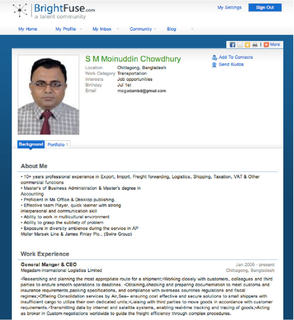 It appears that Brightfuse (brightfuse.com), CareerBuilder's attempt at building a LinkedIn killer (and probably the site with the largest resources at it's disposal to do so), has fizzled.

When going to the BrightFuse site, it now redirects to a CareerBuilder blog. Back in July of 2010, BrightFuse.com was getting about 60K unique visitors, according to Compete.com.

In this August 2009 press release, Liz Harvey, senior director of online products for CarereBuilder, said "In this difficult job market, online networking is an important piece of the puzzle for workers wishing to build professional relationships, and ultimately, connect with their next great job."

So what's the inherent problem with a job board like CareerBuilder trying to create a open career-centric social networking site? Business conflict. Charging for jobs and for resumes is how Careerbuilder butters its' bread. Isn't the very existence of an open and free career-centric social site a threat to their lock-and-key job board model? So, perhaps it was actually NOT in CareerBuilder's best interest to grow BrightFuse. What were they hoping to accomplish? Anyone have more to add to the story?

What role will open and free career-centric social networks, as well as main-stream social networks like Facebook, play in the future of recruiting? Can social career sites like BrazenCareerist.com, Koda.us, Jibe.com, JobNet.com, Namesake.com, or other tools like Branchout or JobVite actually be market disruptors if done right?

Job boards that deliver good results in their niche markets and have offerings that consist of a wide array of creative products will survive. However, as Jeff Dickey-Chasins said in his 2011 Job Board Predictions post on JobBoarders.com, I also believe that we can expect to "see a few intermarriages between social recruiting and job board sites as well."