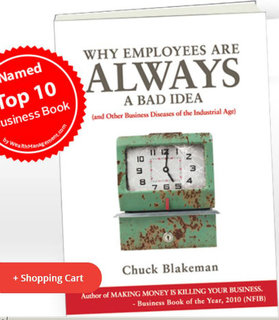 The Recruiting Animal Show guest  on November 12, 2014 was Chuck Blakeman and we discussed, primarily, the How To Hire chapter from his book, Why Employees Are Always A Bad Idea.

To me, it seems that Chuck sees history as a battle between good people and bad mediated by technology.

Rulers have always been after power. Their primary interest is the domination of other people to satisfy their egos.

The liberalization of society in modern times let non-aristocrats into the power game and technology made for the creation of business empires that could provide their paths to glory.

Like the feudal barons, the business barons didn't pursue a project because it was exciting or good in itself. They only did things to satisfy their lust for domination. Their interest in the people who worked for them was also subject to this primary goal so these underlings were seen as nothing more than machines meant to perform well-defined functions and follow orders.

The result was the employee. This is a person who works at a job he doesn't like for a paycheck. He has no initiative of his own.

Chuck calls the business barons Industrialists and says that they are being replaced by true capitalists. These are people who create and run their own business not, primarily, for money or power but because they like what they do.

Capitalists don't want employees. They want Stakeholders. These are people who want to join a team to do something that is interesting in itself not primarily for money. Their own interest motivates them so they don't need managers to drive them.

The question is, then, how to recruit stakeholders? Chuck lays his process out in his book and that is what we talked about.

His ideas are very different from our usual practice. He starts off with an ad that is around 8 or 10 pages long and begins with a discussion of the ideas about life and work on which the company is based. Applicants are told not to send in a resume but to answer 7 cultural questions. He doesn't want to meet the candidates until very late in the hiring process and in the early part he doesn't want any direct contact by phone either. His hope is that these hurdles will only interest stakeholders and turn off the employees. I thought it was a very interesting show.

Now, I know you're going to ask me, "Animal, what technical problems did you have today?" And I have to admit that they were major and I caused them myself. I mean, the guest was not on a good phone but that fact was completely overshadowed by the fact that I had my mute on without realizing for the first 10 minutes of the show. I did a great introduction which no one heard. By some miracle the guest and callers were still on the line when I finished but I couldn't figure out why no one was answering me.  I hung up and dialed in again without any effect and then I finally looked at the controls for my microphone. What can I say? It's never happened before so it's not something I check.

So, I edited out the first part of the show and it starts very abruptly in the recording (at the singing).

And, finally, there was no Aftershow because Jerry is away hunting.

YOU CAN READ MANY OF CHUCK'S IDEAS ON HIS BLOG HERE.

HERE IS A CULTURE-ORIENTED JOB AD