Company Changing Direction? Here’s How to Hire in a Pivot 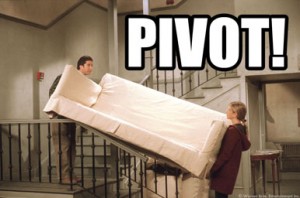 You watch “Silicon Valley”, you’re familiar with Mark Zuckerberg, and you’ve definitely heard of Snapchat…so you know that small companies, or even slightly larger startups are prone to pivot. It means shelving a product that got lackluster market response or changing direction based on client feedback. Smaller businesses don’t have to chain themselves to what’s worked (or not) in the past, and can change their business models on the fly (and sometimes need to due to client or investor pressure). But if you’re planning on changing your business offerings, how should you hire for your pivot? Who should you keep around? How do you attract new kinds of employees?

The hardest part of making your pivot is that if you’re planning on changing your business entirely instead of expanding, some people are simply not going to make it. If your company was primarily IT and you’re refocusing on PR or consulting, you’re probably going to get rid of a few coders. But there’s no reason skimming the excess fat in favor of new blood has to be awkward. Linda Richardson , founder of Richardson and faculty at the Wharton School, lays out how keeping your explanation short but clear can make a big difference.

“Keep your explanation short but specific. For example, ‘We set X objective to be accomplished by [date] and it was not met. Your performance has not …’ Detailed feedback should have been given in performance reviews and shortcomings worked on in coaching sessions… You do not want to get into an argument or long discussion — the decision has been made and is non-negotiable.”

Of course, support staff responsible for the business’ upkeep should be able to make the transition from one business to another. You’ve already built that core, and since it’ll run no matter what your pivot is, there’s no point in trimming it until you feel you have to. This includes some managers, core IT staff, people who keep up with schedules, accountants and other people responsible for daily tasks that don’t necessarily depend on what the business actually does. Additionally, these support staff , who have been around the business long enough to know its ins and outs, have gathered some important information in their time:

This isn’t to say your IT crew will divulge secrets on your company — but they know more than you think, and the longer they’re there, the more valuable to your company they’ll become.

In With the New Skills

In making your pivot, you’re going to need to hire new kinds of employees. How do you get them to come onboard a company whose future may not be clear? When you think about it, hiring for a company during a pivot is not all that different from hiring for a startup as it’s taking shape. The big difference is that when you’re making a pivot, you should have more knowledge of what your business needs to be successful. And that means orienting your hires more towards skills, rather than personality type and or cultural fit (though they’re important, too). Rather than outsourcing existing positions, companies like IBM offer employees the chance to receive additional training to bring their skills in line with the needs of the company. Alternately, these employees may look for a new role altogether.

“Employees receiving the offer are given little choice, other than to look elsewhere in the company ‘for opportunities for which your skills may be a better match. ’”

Once you’ve figured out your pivot and how you’re going to get there, the hiring decisions aren’t that difficult to make. They’re difficult to follow through on, since pivoting will involve several difficult conversations with employees who may not have done anything wrong and hiring for a field you may not be familiar with. But layoffs don’t have to confrontational, not every has to be let go, and new hires should come once you know what skills to focus on.

Great post, thanks for sharing Erin! So, my question is, how do you address the pivot when it comes up on Glassdoor (because it will, inevitably)? Do you recommend full transparency about the pivot with your employer brand? Do you talk to people before they ever leave?