Game of Thrones characters and their recruitment counterparts... 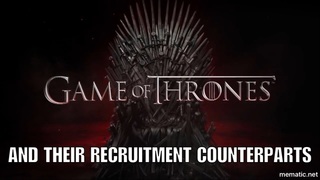 Game of Thrones season 6 finally returns on Sunday, for what seems like an eternity, it is now only a few days away!

Is Jon Snow actually dead? What will happen to Daenerys now she is a prisoner to the Dothraki's? Will Cersei seek retribution on the High Sparrow? All will be revealed hopefully soon...

Before that however, let's us look at some of the most popular GoT and their recruitment equivalents -

Young, hungry and has been thrust into the spotlight early on in his career. He has made a lot of good decisions so far in his young career, thought outside of the box, is resourceful and also entrepreneurial. Well on his way to becoming a top biller, but this hasn't gone unnoticed by his colleagues and the knives could be out for him...

Always seems to be out, even on a Monday and Tuesday, but miraculously is always on the ball. Somehow a top performer despite his love of a night out; is loved by Clients and Candidates alike, probably due his gravitas and ability to sell himself. Also, if you lend him £5 for lunch, he will also repay his debts...

Ambitious to the point of ruthless, she knows how to play the game in order to achieve her personal career goals. Very persuasive and can influence her colleagues, clients and candidates to her way of thinking. (Incest not necessarily transferable)

Similar to Jon Snow, has been in the spotlight from early on her career. She now commands a highly successful team, whilst also leading from the front. Whilst her methods aren't widely accepted, she commands respect and will become a powerful queen one day (CEO)

A rookie to the industry, but bright, tenacious and resilient - she is on a quest to prove to doubters that she is on the right track and prove to herself she has what it takes to be successful. She has the fire in her belly, which can sometimes prove to be her downfall.

Another newbie, but a real maverick. He has managed to rub his team up the wrong way and is happy to take colleague's clients and candidates from under their noses, showing little or no remorse. Highly competitive  and hates anyone else's success. He'll likely get his comeuppance eventually...

No one knows who employed him, how long he has worked here or what hours he keeps? He doesn't speak, save for giving his colleagues icy glares when they ask a favour of him. Is likely plotting overall domination in the office...

Highly experienced, a veteran of the industry and is the eyes and ears of the Leadership team. Tends to start office gossip and manages to ensure the blame is never on him. Due to his long serving, loyal nature, he will likely become the MD in time.