Harlem Shake is not an employer branding strategy

Probably the only thing that happened to me in February that can not be unseen would be the Harlem Shake.

But there was a valuable out-take for recruiting too, from this joyful mass-adopted boogie. 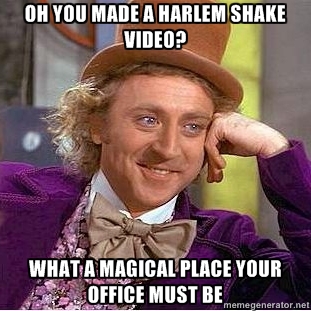 We all know what the Harlem Shake is by now and I won't waste your valuable time getting into the origins of the dance, the numbers of harlem shakes uploaded, or what the haters said afterwards. We will also promise to avoid any mention of 'irony being the last defence against reality' or any other deep philosophical appraisal.
Before the Shake gets lost under the suffocating carpet of time, along with the pistachio nut shells and cigar butt remnants of Gangnam Style, let's have a think about what Harlem Shake meant for recruiting.
Almost straight away - a whole ton of employers got in on the action.

Why?
1. It was fun
2. It was easy to make and publish
3. It was free of ugly corporate 'messaging'
4. The people were the stars
5. It gave employers who are currently drowning in money US tech darlings a chance to show off how nice their office-plex is.
Harlem shaking also played to ALL the key elements to deliver VIRALITY, and so it's not surprising that people were going nuts over it.

So what were those elements:
And it's the simplicity part, and the sheer fun of the project which led a vast number of employers to make one - or several.
What's interesting here is that many of the employers who were posting Harlem Shake had never considered posting videos of themselves before. I think mostly they were too shy about it.
SocialTalent blog make a hopefully slightly tongue in cheek appraisal of some of the bigger Harlem Shakes posted from firms like Google, eBay and Linkedin as being "Employer Branding"...
Beyond showing that the place that you work is "fun enough" to do this kind of parody, or that you have exceptional places near the office to purchase odd masks, it's not really Employer Branding, is it? As BrandeMix points out on Brande Blog, It's not really leading, it's following.
Although all of the format-specifics were absolutely perfect for everyone to jump to the camera and make the shake go viral crazy, it's not really employer branding unless it showcases the magic sauce. The stuff that makes your company a unique place to work.
So I'm not being a big grinch on this... I even used our MEC Australia Harlem Shake to help convince a happily employed with a competitor candidate based in the US to work for us. He watched it when we talked on the phone and yes, he LOL'd.
I'm kidding myself absolutely sure it cemented his interest in joining. But the cool-factor with something this instantly popular will fade faster than the music did in the meme - you have been warned.
I'm very glad that so many employers finally plucked up the courage and the camera to demo how easy it is to make a cool video of real people at work/play - but if you want to attract the best, the Harlem Shake alone won't bring them in. What it will hopefully do is get you thinking about the rules of virality and how you can apply them in a unique context to deliver something amazing in video employer branding, just like Heineken did here.
Or at least, to pluck up the courage to pick up the camera/smartphone and start filming....
More like this after the jump @ TalentMagnate