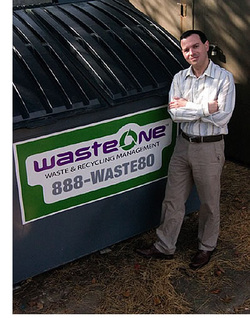 The Elevator is starting a new feature called “Hold the Door.” We will now be taking the time to sit down regularly with different companies and interrogate…I mean interview them on the different aspects of workplace culture, hiring, and social networking initiatives. We hope to help job seekers, businesses, and anyone else retain something of value by “holding the door open” and allowing them to get in on other companies’ unique methods and opinions on workplace culture.

For our inaugural interview, we sat down with Omar George, founder and owner of WasteONE, the fastest growing independent business in the waste removal field in Michigan. WasteOne received a top-ranking award in Crain’s Detroit Business in 2009 and services some very influential places, such as Wayne State University.

Mr. George was a recipient of Crain’s Top 40 Under 40 Award in 2009 and has over a decade of experience in the business world. He managed to create a hugely successful company during the lowest point of the current economic decline.

Click the following link to read the Question and Answer session: http://resourceblog.weebly.com/1/post/2011/03/wasteone.html