How to Recruit Top Talent With Pokemon Go 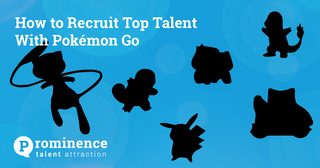 If you haven’t heard of it by now, where have you been? Pokémon Go is the latest viral sensation storming people’s smartphones, turning the world into an augmented reality Pokémon catching ground for everyone with a mobile internet connection.

After already overtaking Tinder, Pokémon Go is now looking to surpass Twitter in daily active mobile users. It makes sense then that some businesses are already jumping on the opportunity to convert the extra foot traffic the game brings to their store fronts into paying customers.

For Recruiters, Pokémon Go presents a unique opportunity in that it gives you access to a vast pool of millennial candidates just waiting to be engaged. There's no point just being aware of all the talent available, you have to be connected. That's where this guide comes in! First things first: get the app, play the game, and catch some Pokémon. You will need to be able to at least throw a Pokéball straight, and if you can hit a sweet curve ball then you’re well on your way. Once you’ve built up a bit of a repertoire, it’s probably a good idea to publish your Pokédex score on LinkedIn.

Just like recruiting in any industry, it’s a great idea to engage with industry communities on social media and build up your network. Aside from actually playing the game, get involved with the numerous Facebook MeetUp groups (in app groups and messaging coming soon) and collect a few lures. Lures are a bit like social media spend on job ads – if you use them right, they’re definitely worth paying for! These lures are what you’ll use later on to bait in the Pokémon Trainers.

Lures are Good for More than Just Pokémon

Find a location with lots of nearby Pokéstops and lots of people. Aotea Square in Auckland is a real hotspot for this. Pick a day and time and promote on the Facebook group you joined earlier that you are going to be dropping some lures at the location. Next thing you know you’ll be surrounded by aspiring Pokémon Masters, fishing the Pokémon talent pool for all the savvy millennials you can imagine.

You could even take this a step further and set up an impromptu careers fair; bring along a company banner, a collection of jobs and candidate sign-up forms. Alternatively, if you are already at a careers fair, perhaps trying to promote a grad programme on campus, you could set up shop near a Pokéstop and sponsor it with lures for the evening and incorporate that into your on campus advertising for the day.

To make things even easier for you, Niantic (the company developing the game) has just opened up applications for user submitted Pokéstops. This means that you don’t even need to leave your office to set your lures. Find a nearby mural or interesting feature of your office, take a photo of it, and submit it to Niantic. Next thing you know, candidates will be queuing at the door.

Rumours are circling that soon you will be able to sponsor locations in Pokémon Go, somewhat similarly to geofilters in Snapchat. This could enable to take your recruitment in Pokémon Go to the next level when it’s released, because you won’t need lures and Pokéstops anymore to bring in candidates. You could simply mark out your office, or career fair location, sponsor it and wait for all the Pokémon and trainers come straight to you.

Whether you think the game is ridiculous or not, it’s important to put your prejudices and personal feelings towards Pokémon aside. Pokémon Go has, overnight, become one of the best ways to tap in to and connect with people under 25. The only real question is how long it will last.

Now, this was obviously written largely in jest - sure, some of the really tech savvy recruiters will give it a go, but it’s definitely not a new goldmine of talent - yet. However, it just goes to show how quickly the online environment can change. One minute Nintendo is being written off as the next Kodak, the next it is overtaking Tinder in terms of active users.

So, if you want to be the very best, grab your phone, grab your lures and get out and catch ‘em all!