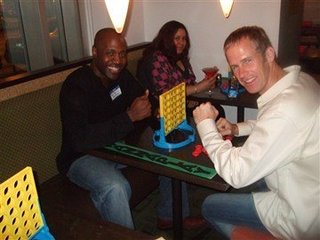 Mark has a good blog. I liked it because he is very honest about the ups and downs of his career.

However, on the show I wasn't really able to dig into how Mark wrestles with problems and here's why. It seems to me that after 18 years in the business Mark has reached a point at which he only has to deal with genius clients and candidates and that automatically solves a lot of problems.

If a candidate tells Mark that he doesn't want to go out to see a certain client, Mark only has to say, "Look at the people there. They are fantastic. Trust me. It's worth looking at." Inotherwords, the resumes of both client and candidate pretty much sell themselves.

I had much the same problem when were talking about counter-offers. Mark agreed that contrary to what most recruiters automatically claim, counter-offers are not always bad. But the example we ended up talking about was a counter-offer that was so fantastic that its value was really beyond debate so I don't think it shed much light on lesser affairs.

There were a lot of people on the line but Cathy Mannis was the only one who spoke. Jerry was good when he said something but he didn't say much and he was busy with work so there was no aftershow.