Steve Jobs' inspiration quotes: What recruiters can learn from the man behind Apple 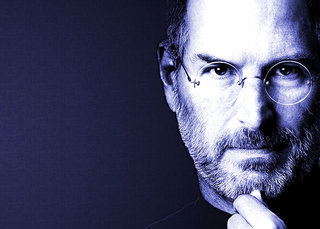 Last Friday saw the release of ‘Steve Jobs’, the biographical film depicting the life of the legendary Apple founder himself. Whether you’re fans of Apple products or not, it’s difficult to argue with the impact that Steve Jobs had on the business world.  Jobs led the company to release many disruptive products and technologies that have changed the way we interact with the world today. In light of this, we wanted to pay homage, taking some of his most iconic quotes to see what lessons recruiters can learn from them:

“Be a yardstick of quality. Some people aren’t used to an environment where excellence is expected.”

Apple has long been known for its commitment to delivering high quality products that completely transform or revolutionise consumer experience. In Steve Jobs’ biography, written by Walter Isaacson, this attention to detail and focus upon quality became clear through his meticulous care about features — He even insisted the inside of his computers be beautiful!

As recruiters we work with people, not products. A great recruiter will focus on gaining a deep understanding of both the client and the candidate in order to form the perfect partnership between the two. A consultant too focused on short term financial reward will be blinkered, delivering an inferior service. This approach can only lead to failure. On the other hand, a consultant who forges long term relationships, delivers great customer service and truly consults with their clients and candidates will create sustainable, long term repeat business.

“Innovation distinguishes between a leader and a follower.”

Steve Jobs is credited with leading his teams in changing the face of the music industry through the introduction of the iPod and iTunes, the mobile phone industry with the release of the first iPhone and the digital media industry with the release of the iPad…to name just a few examples. Under Jobs’ watchful eye, Apple has innovated in a wealth of areas despite facing stiff competition from countless other companies.

Recruitment is an extremely competitive industry and just doing the same as everybody else won’t get you very far. What sets you apart? Don’t settle for being just another recruiter. Think about your market, your value proposition and make sure you deliver an experience to your clients and candidates that breaks that recruiter mould. Work smarter, not harder by understanding your the needs of your customers before you do anything else.

“Things don’t have to change the world to be important.”

Sometimes the little things can have a profound impact on somebody’s life, it’s just a question of perspective. Though Steve Jobs is widely recognised for his technological innovations, his unwavering attention to detail is what truly set him apart. Jobs was a key investor in Pixar during its early days and sat on the board in later years. He played a significant role in the design of one of their campus buildings, later named ‘The Steve Jobs Building’. During this process, Steve obsessed over minor details, such as where the toilets should be placed and how atriums should be designed in order to maximise the chances of what he called, “serendipitous personal encounters”. Though seemingly minor details, they all contribute to a bigger picture — employee wellbeing and collaboration.

Whilst it’s important as a recruiter to make sure that you have a differentiating factor between you and the rest of the market, there are little things that you can do every day to make sure you’re the consultant of choice in your market. Treat everybody you deal with well and they’ll remember it. Whilst they may not be the ideal candidate for a role you’re looking for now, or a hiring manager that may not be hiring just yet, it doesn’t mean they won’t ever be. Invest time in the people you deal with every day and it’ll pay dividends in the long run.

“Sometimes life hits you in the head with a brick. Don’t lose faith.”

Steve Jobs’ struggles were well documented. Having been diagnosed with rare form of pancreatic cancer in 2003, Jobs battled the illness until October 2011 when he sadly passed away. Despite this, he remained an inspirational leader at Apple until August 2011 when he resigned as CEO. Through these incredible odds, Steve Jobs showed that it’s still possible to do great things in the face of incredible adversity.

Resilience can come in all shapes and sizes. Steve Jobs demonstrated the ultimate resilience in battling with cancer the way he did whilst continuing to support the company he founded. Though we’d hope nobody ever has to experience struggles on this level, everybody faces challenges every day that sometimes seem insurmountable. Recruitment can be a tough job and sometimes things happen that are just beyond your control. People might not pick up the phone, perfect candidates could be rejected or placements could fall through. The trick is to keep driving towards that bigger goal; it’ll all pay off in the end.

“We’re just enthusiastic about what we do.”

Ultimately, a positive attitude and a bit of enthusiasm can go a long way. Everybody has their down days; it’s how you deal with them that counts. If a colleague has a negative attitude at work, perhaps you have somebody who isn’t truly inspired by what you’re doing as a business. Do you have the wrong person working for you? Without the right people in place, a business can never truly succeed. As recruiters, you get to play a fundamental role in helping businesses to build teams and ultimately, grow.

Really love this one:

“Be a yardstick of quality. Some people aren’t used to an environment where excellence is expected.”

Find a smart friend who creates a wonderful new product all on his own and is so naive he gives you half ownership for doing next to nothing,

Be so narrow minded that you insist on an alternate treatment for your illness when a mainstream treatment could have saved you.

Be so unpleasant at work that no one can stand you.

There's a few more. But I'll just leave you with this video from the guy who created the Apple computer.