The Counteroffer: Why and How to Avoid This Losing Proposition

When an employee informs their supervisors of their resignation, they are sometimes confronted by what is known as a counteroffer - an employer’s “rebuttal” to the resignation in the form of a proposed salary increase or other perceived benefits.

Many misinformed professionals have no hesitation in considering a counteroffer.  In fact, many will reason that a salary increase in their present position alleviates certain difficulties or concerns they have in their current role.   Additionally, submitting to the pressure of a counteroffer might simply feel like the easiest thing to do in an uncomfortable situation. For instance, the counteroffer may be incorrectly perceived as an easy way to acquire a monetary promotion and enables you to bypass the adjustments associated with transitioning to a new organization. In reality, although a counteroffer may seem like a tempting, even flattering quick fix for many employees, its acceptance should be avoided in order to protect your long-term career interests. 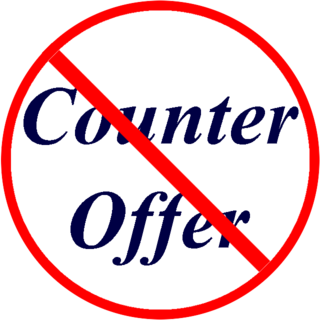 If you are among those professionals who, following the announcement of your resignation would consider a counteroffer, you may want to reconsider your decision. The list below details the most important reasons why, once you have stated your decision to leave your current organization for a new opportunity, you should not back down, even if tempted by higher pay:

• You’ve Wasted Your Time
You have already applied considerable effort in obtaining a better opportunity, motivated by some particular dissatisfaction within your current role. Why give that up? By accepting a counteroffer, the only “benefit” you’ll enjoy after all that effort is a higher salary. Meanwhile, you’ll remain unhappy with your manager, colleagues, responsibilities, the organization itself, or whatever it is that initially triggered your decision to leave.  And that higher salary may only be an upfront piece of any future raise you were going to get.  Thus, your future raises will probably be greatly diminished.

• Professional Relationships Will Suffer
You are going to significantly tarnish your relationship with both your supervisors and managers. Management may feel as though you pressured them into offering a higher salary, especially if your continued employment with the firm was important to them for the accomplishment of certain key objectives.  As a result of these strained connections, you’ll be placed at a disadvantage in terms of receiving recommendations or referrals in the future.

•Poor Implications for Promotions
The acceptance of a counteroffer implies that you are willing to take on additional responsibilities that you may be unprepared to handle. Unlike an organic promotion, your salary boost won’t be prompted by a display of outstanding performance or someone else’s resignation. Furthermore, you most likely won’t be considered by management for other promotions if the only way that you are able to obtain one is to admit that you have been offered a job at a higher salary.

• You Won’t Be There Much Longer
Statistics show that employees who accept counter offers won’t remain in their current positions for more than one year.  In fact, according to US News, between 70 and 80 percent of those who take a counteroffer will leave the organization within nine months.  In this case, you’ll need to begin your job search all over again.

Now that you understand the rationale behind rejecting a counteroffer, you should know how to avoid the proposition in the first place. Before you even approach management to let them know that you are going to resign, you have to be absolutely grounded in your decision to take the offer at the new firm.  Any doubts will leave you vulnerable to the temptation of a counteroffer, so be sure to constantly remind yourself of why your decision to leave is the best path for your career. To solidify your decision about leaving your current position, put it in writing for management in the form of a resignation letter. The letter should include your intended last day with the firm, as well as a statement of the fact that your decision is final.  Finally, you must reiterate the definitiveness of your resignation in person. If the inevitable counteroffer is made, you can politely decline while stressing that the opportunity – not the salary – offered by the new position is best for your career.

Clearly, the resignation process will sometimes be difficult for professionals given the frequent use of the counteroffer tactic by employers. The bottom line is that accepting this type of proposition will only amplify your original job dissatisfaction and lead to your eventual resignation or termination.

"I am looking for a new job because I don't like the culture or my immediate manager and I don't see things in the same way. So yea! I get a new job with your company.  Oh, wait, they just offered me $10,000 more to stay. I am almost SURE I can change things around now with this."  This has happened to me several times in the last couple months.  People get momentarily blinded with a bit of extra material fluff and it all goes out the window the main reasons of their unhappiness. I like your statistic about how the shine eventually fades after 9 months or so and those employees leave anyway having to go through all the work of searching again.  Hopefully candidates out there will read this!