Fabrice Grinda, the co-founder of one of Shiftgig’s investors, FJ Labs, told TechCrunch that Shiftgig was the largest and best temporary staffing startup in the world.

“It’s clearly going in the direction of history as more work is being ‘gigified’ as employers and employees both seek greater flexibility,” he said.

Both Workpop and Wonolo have raised significant capital in the past year, ($16.1m and $7.9m respectively) while the Bangkok-based Helpster continues to lead a wave of service-based gig connections across South East Asia.

All these companies follow more established players like Lyft, Uber and TaskRabbit, which continue to prove that gig-based and freelancer based hourly work are possible entirely via mobile platforms.

The McKinsey report ‘Independent work: Choice, necessity, and the gig economy’, found that more than 160 million people in Europe and the US —about 20 to 30 percent of the working-age population—engage in some form of independent work.

However, just 15 percent of the independent workers surveyed use a digital platform to find work. 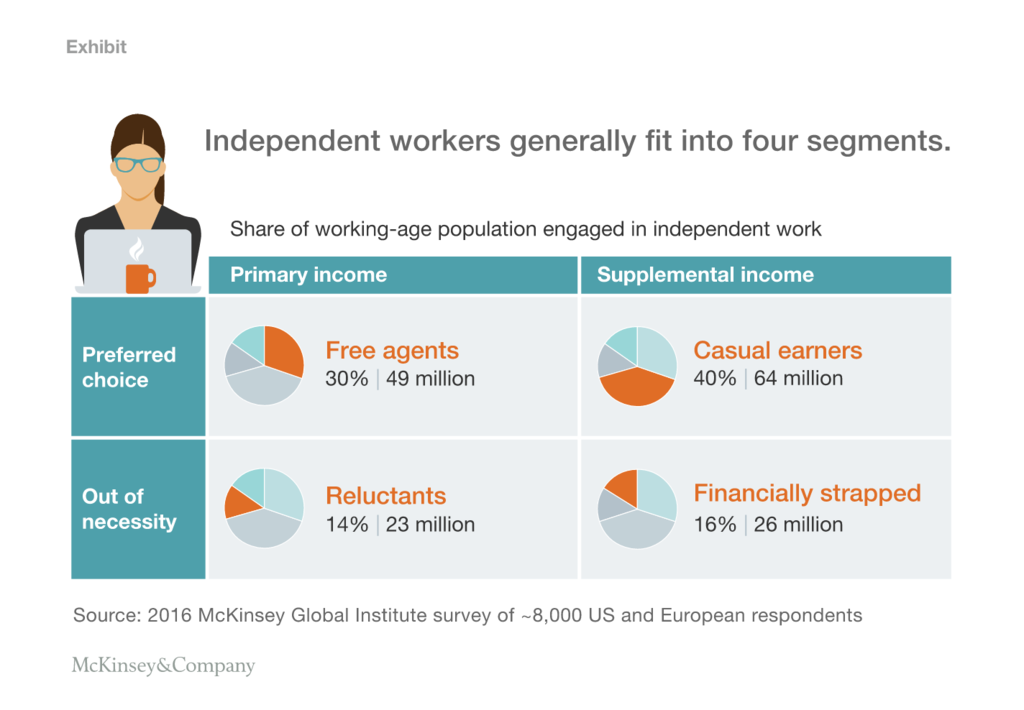 “In a technology-driven environment where most human work is project work, the number of needed gig (short-term) workers will increase dramatically,” he said.

But he warns that it’s not all rosy ahead.

“Unfortunately, the current troubled contingency hiring model won’t work because these gig workers will have to be exceptional performers that get every detail right the first time.”

For workers, the future looks like diversifying skills and constant retraining. For recruiters, it looks like flexibility may be the best move as well. What skills do you currently use to get someone in the right position? Would you not use similar skills to find people for part-time, casual and hourly positions?

As we rely more and more on technology to source the best candidates for the job, human relationships and connections become more important than ever.

What’s The Cost?
The question of worker protections continues to be a concern, as workers have long relied on employers to deliver unemployment insurance, disability insurance, pensions and retirement plans, worker’s compensation for job-related injuries, paid time off, and protections under the Fair Labor Standards Act.

And while the Affordable Care Act has made it easier for workers to secure health insurance on their own, many workers are now watching anxiously to see what the new administration will do for their coverage.

In their study, “The Rise and Nature of Alternative Work Arrangements in the United States, 1995-2015” research associates at the National Bureau of Economic Research Lawrence F. Katz and Alan B. Krueger said the share of the workforce included in alternative employment arrangements had grown to 15.8 percent by 2015, an increase of 9.4 million workers. However, over the same period, the U.S. economy only garnered 9.1 million new jobs.

"A striking implication of these estimates is that all of the net employment growth in the U.S. economy from 2005 to 2015 appears to have occurred in alternative work arrangements," the study concludes.

This post appeared originally on the 1-Page Blog, which shares thoughts on recruitment, the HR industry and the future of work.