The Real Reasons Why Corporate Recruiters Hate You

Agency and corporate recruiters have always had this love/hate relationship. It’s a sibling rivalry of sorts – in some cases each thinks the other doesn’t know what they’re doing. After 10+ years on the agency side, I have a great deal of admiration and respect for those that do it well. I also have a newfound respect for my corporate brothers and sisters as I enter my 7th month on the dark side. I still maintain that recruiters shouldn't be allowed to go internal until they've cut their teeth as a third party. It's essential training and as @MattCharney said on Twitter yesterday, you learn to "hustle".

After 60 reqs filled in just over 6 months and mixed results with agency recruiters, I must admit I look back on some of my past behavior as a TPR and cringe just a little (ok, a lot). I know none of my beloved RBC friends make these mistakes but perhaps you can forward on to the real culprits…?

Reason #1 – you are too cocky. Hey I love a little swagger, I really do. What drives me nuts though is when your agency arrogance displays itself by looking down on the poor corporate recruiters who “can’t” do what you do because of some perceived lack of skill or ability. That’s not why I gave you the job order… I gave you the job order because my time is better spent working on the other 40 reqs I have open instead of devoting half of my working hours to ONE. It’s not that difficult a concept. We both perform a valuable service to our clients, and the best on both sides will always have a seat at the table. Don't mistake my decision to go in house for weakness.

Reason #2 – you view me as an obstacle between you and the “real" hiring manager. I know you want to talk to the hiring manager, and I want you to. I gave you this job order because I have other things to do. Unfortunately if the hiring manager doesn’t want to talk to you (and sometimes they just don’t) then you and I are going to have to play nice. It is in my best interest for you to fill this job. I will talk to you every day if you want, and be completely transparent. Why on earth would I not give you every last scrap of detail I can to make this a win for both of us?

Reason #3 – you over promise and under deliver. What more can really be said about this? Don’t make promises you can’t keep – period. Or, if you say you’ll have candidates in a week, but don’t – just let me know! I’ve been recruiting long enough to know things don’t always go according to plan. Just be straight with me like I am with you.

Reason #4 – you get the job order, then disappear. I know I am not your only client. I doubt I’m even your best or favorite client. My company has a very strong internal recruiting team, so you may do one or two placements a year with us. I get it - that probably doesn't put us at the top of your priority list. If you’re not willing to put in the effort, why take the job order? If I am not the kind of client you want, then just politely decline… I can handle it.

Reason #5 – you push back against my feedback. If a candidate you’ve submitted is rejected (before or after the interview), I will tell you why. If we have a strong relationship, you can count on me to be brutally honest. I’m not talking about reasonable discussion – I’m happy to listen to your side and would expect you to defend your candidate. When you start demanding to speak to the hiring manager about “why” he/she was rejected, and ignoring me because you don't like what I have to say, then we’re going to have issues (see Reason #2).

Reason #6 – you treat me like the competition. I realize not all corporate recruiters operate this way, but if I give you a job order I am no longer actively recruiting for it. You are. That doesn’t mean we won’t still have the role posted, and we may still receive active candidates applying, but I am not sourcing. Personally, I view you as an external extension of my team. Why compete with my own resources?

Reason #7 – you don’t know me. You’re too busy selling me on your awesomeness to even bother getting to know me or my company. I especially love the split desk agencies. If I somehow end up talking to the recruiter finding the candidates, I find out the Business Development dude told him very little about my company, and what he did learn was wrong. So when I have to set you straight, don’t tell me “that’s changed”. Nothing’s changed, you just didn’t know anything about us in the first place. Hint – don’t assume, ask questions.

Now let me have it. Someone out there is DYING to come back with a list of why agency recruiters hate the corporate side. I can’t wait to see it, because I know you won’t be talking about me. :)

Amy- as a corporate recruiter myself, I couldn't agree more with this. I, too, came from the TPR side and I fully respect my partnerships with them. As you said, you view them as an extension of your team. It seems that there are very few agencies I can trust with my reqs anymore, because the others just don't get it. Great job!

Thanks Tiffany! I'm just waiting for the hell I'm going to catch for this post from TPRs who can't take it lol. Appreciate the kind words and I have to say there are still a few agency recruiters out there I couldn't live without! :)

@Amy - maybe it's because I've only been recruiting for 3 years, but so far I really like all the coroporate recruiters I work with. I can't say the same about all the hiring managers or owners I've worked with - past tense because I decided they weren't worth my time or my candidates time.

Now back in my corporate days as a hiring manager, when the company went to internal recruiters, we got a doozy! I tried to understand why an approved req would possibly take 3 weeks to be posted (it was a pretty automated system, and no job description to write as they were all in the system to pick from), how it could be effective to wait another 3+ weeks to do the initial phone interview, etc. But at least it gave me an idea of how and why some clients, hiring managers, and corporate recruiters have to go through specific systems and processes. Sometimes you just wish - I'm sure all parties involved do! - there would be a way for common sense to take over and simplify things. 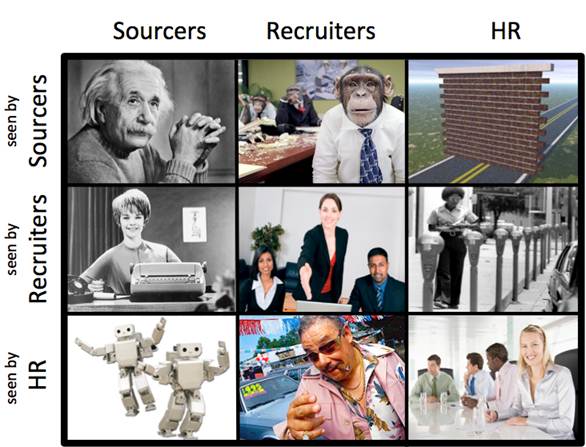 It's all about perception and where one stands or sits as the case may be.  :

@Amber exactly! I think the major difference between corp and agency is as a corporate recuiter I don't get to "fire" bad hiring managers. :) I can honestly say that I would have failed miserably in my current role if I hadn't survived the agency world. Fact.

@Sandra - that may be the best graphic EVER. :) Oh so accurate!

Amy:  I'm new to recruiting (agency side) and just wanted to let you know how much I appreciate your post.  It is so invaluable to catch a glimpse, so to speak, of what you do and what the relationship looks like from your side.  Thank you for posting this.  It helps.

That you have been on the TPR side and can fully empathize with our world makes you an excellent corporate recruiter for any agency recruiter to want to work with.  When you establish a relationship with a TPR, do you usually disclose your TPR history?  In my experience, when I know the corporate recruiter I am working with understands my world, things tend to go a little smoother.

I'm not sure that your "corporate brothers and sisters" who have not been on the TPR side embrace the relationship with TPR's quite the same as you do.  Some yes, but not most.

I'm focused on AE's so I'm working with Sales Managers for the most part.

They typically aren't happy with corporate HR and prefer dealing with Recruiters they know if allowed.

Makes alot of sense to me since the most important criterion is typically related to a candidates personality.

For the most part I find HR views me as the competitor and not vice versa.

@sandra...that's why I run 360% desk. I get view myself as a good looking Einstien