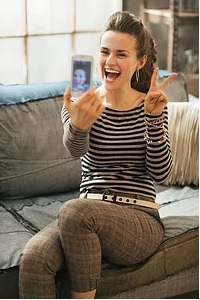 With the advent of social media, many people feel free to share anything they want, however they want. While what they do with their personal profiles is their business, LinkedIn is meant to be strictly professional. Not everyone sees it this way. With many employers looking at LinkedIn before scheduling an interview, considering a promotion, a speaking engagement, or hiring, it's important that your LinkedIn profile remains professional. Here are some weird things we've found when researching potential candidates:

1. The bad profile picture. The selfie. The guy with his shirt off. The party scene. The one that looks like a two year old took it while sneezing. None of these say "hire me" or "consider me a professional to speak at your next function." Invest in a quality profile picture, preferably not the same one as on the company's website. With cell phones now having quality cameras, a professional-looking profile picture can be done for little to no cost, whether by you (not a selfie, but a timed picture) a friend, or a coworker. On a related note, keep the pictures natural. There is no need to Photoshop yourself or add something to it, like a T-rex chasing you down the streets of Tokyo. Keep it simple.

2. Lack of professionalism. Everything you do on LinkedIn is shown on your profile - every comment, everything you have "liked" and shared, and every misspelling. Consider what you do before you do it. Crude pictures and swear words will be viewed by more than just you and your friend. We recently found someone who posted horrible comments, including hate speech toward people of religion, political affiliation, and other, personal beliefs. We informed the company that he worked for that we would not be doing business with them as long as he remained an employee. Furthermore, when someone asks us for a recommendation, we are less likely to suggest that company. One employee cost a company a lot of money.

3. Lies or exaggerations. We shouldn't have to mention this, but it's far too common. Claiming to work at an impressive company or that you obtained your honorary doctorate from an Ivy league school hurts more than it helps. For those of us in a small industry, lies are easily found out. Some lies are just absurd and are not likely to result in anything positive, such as the picture shows. Some are amusing (like those that list their job as "ninja") but are still not likely to result in anything positive and can cost plenty of opportunities. This includes fake or exaggerated recommendations, whether by or for you.

4. Using it for something other than professional opportunities. We have nothing against asking for donations to your favorite organization, but we found one person attempting to use LinkedIn as a dating site. This person went into extensive detail, including information about the ex and details about their dating life. Sometimes people will keep their profiles professional, but then they link to other social media accounts, where they are not as professional. If you would like to be on social media, there are many platforms out there that allow you to manage a professional and personal profile while keeping them separate. Just be sure you don't use the same profile picture for both.

5. Omitting or extreme repetition. While certain things should not be on your profile, likewise omitting things should not even be considered. Trying to hide a bad employer can come back to haunt you. On the other side, we also caution against repeating yourself. Ideally, any award you have should be listed once under the employer in which it occurred (if applicable) and once in the award section. The more you mention it, the more you appear pompous or, the case of the picture, incompetent.

We take our recruiting seriously, so we only select the best candidates. That includes social media profiles. Contact us and know you'll be getting the best. (469) 651-1208.

Have you seen something we didn't mention here? Let us know!