What Your WORST Boss Can Teach You 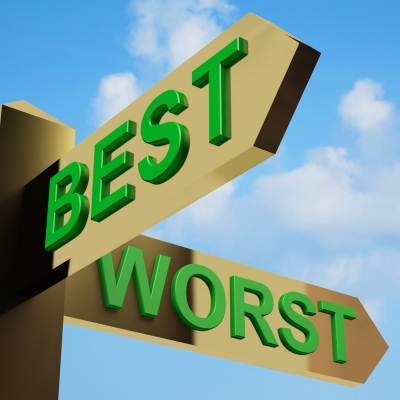 I'm often struck by the amount of people who cite what their best boss taught them, and the things learned they carry with them to this day. That's all well and good, but that denies the learning opportunities that come with some of your WORST bosses. Let me give you just three examples of what my worst bosses did.....

This guy had been over-promoted. In his previous role he'd been the master of detail and could cope quite well as long as everything was within reach. Now he was responsible for 5 branches, and he was still at the detail, and trying to do the job of those branch managers who reported to him. I was one of the branch managers, and along with the other four, we were getting bored. This guy reckoned if we mastered the detail, then the big stuff would come easy, so he spent inordinate amounts of time checking credits for £3.61 (sorry, I'm from the UK - it's about $5), and not asking where the next sale was coming from, or congratulating those who delivered them. He knew where every credit was, but didn't know his margins, his sales, his service, and more importantly, didn't know his people.

LESSONS TO BE LEARNED: Don't do your subordinates job, or they'll get bored and start to do their subordinates jobs. Quite quickly everybody is doing one job below what they're paid for and the plot is lost. As one of my best bosses once said, "Everything will be OK if everybody just does their job"

(Actually, it's the same boss as Worst Boss 1, but he was so monumentally bad, he deserves 2 mentions) This guy was busy. Very busy. He was always asking for stats and numbers, and asking for them at short notice, but we never got anything back. It just seemed to disappear into a black hole. I began to wonder if he was even looking at them, and if this was his way of appearing as if he was keeping an eye on us. I tested this by sending him some rubbish (I was young and feeling fireproof - not good in itself). I waited. Nothing happened. So next time I sent him more rubbish. I told the other four managers, who then did the same. Still we heard nothing. Sadly (because he was a nice bloke, but he was over his head) he became something of a laughing-stock and his lot was shot.

LESSONS TO BE LEARNED: Your subordinates are usually not totally stupid. They will work you out if you're just going through the motions. Don't try to be too clever. Ask for what you need - WHAT YOU REALLY NEED, and give feedback and encouragement.

(This is a different boss to numbers 1 and 2 - I've had a few who fell short of the best bosses I'm afraid) I had been promoted to run a far-flung outfit. This was a big business that had been run by a guy with an enviable history, but he'd lost his way, and so had the business. We were to have a handover period before he left. During our first meeting he was proud to tell me he had personally negotiated the price of the toilet rolls down to almost nothing. I couldn't believe this once impressive guy had lost the plot so much. He was spending time on stuff that really didn't matter as his business was in free fall.

LESSONS TO BE LEARNED: Firstly, you won't make a bad business good by buying cheap toilet paper - focus on what's really important and let others do their jobs. Secondly, none of us are fire-proof. Listen to those around you, and listen to yourself every once in while. Take an honest look in the mirror and ask yourself every once in a while if you're spouting total twaddle and believing your own publicity.

I have many other stories, and I'm sure you do too. Rather than just laugh at them (because many of them are funny .... sadly), learn from them. I learned to look at situations and ask what my best boss would do. I'd then ask what my worst boss would do. One of those was often the right answer, and sometimes, probably more often than is healthy, I did the exact opposite of what I imagined Worst Boss 1 would have done.

There's lot's you can learn from everybody you meet. Don't just take from the best, but the worst too, because that will double your learning.