Why Do Black Holes Still Exist in Candidate Experience? As people I meet learn I am a recruiter, I often get a reaction to that fact and then a mentioning of a mysterious black hole they suspect their applications fall into.  I hear people complain about their candidate experience all the time (and sometimes, regarding the company I work for at the time).

I really do not understand this.  We live in the 21st century with modern Applicant Tracking Systems (ATS) and applicants are not supposed to be lost like they were when we had stacks of resumes on our desks that we received by mail.

Every major ATS that I have seen has the ability to mass email selected applicants with various emails.  We can just click who is not being considered any longer and send them a “rejection email”.  Is this really so difficult?

Even if you have to revisit the candidate later (a rarity, I find)…you can always call the candidate and say the hiring manager was revisiting applicants and we would now like to consider him or her again if he or she is still available and interested.  The applicants I have spoken with in the past have been elated.  So don’t be afraid of sending the “rejection letters” too soon.  I understand keeping some on hold (just in case), but as recruiters we also have to be decisive so we can be timely.

For the ones on a holding pattern, if they have not heard anything after two or three weeks…we should just reject them.  Again, we can go back and say the situation has changed and we want to move them to the next step of the process.

I know that I have had backups awaiting my second opinion (after hearing feedback on the initial group that was sent to the hiring manager).  The majority of the time, I was right and the applicants I selected were well liked by the hiring manager as well (i.e. on target).  The odds are small that I will revisit my on hold candidates…and so I now email them a rejection after a couple weeks or so.  I find that usually they would be considered sooner rather than later.

I know that I have had hiring managers select candidates to put on hold – usually awaiting additional applicants (someone better).  Again, after two or three weeks…please just reject them.  If your experience is anything like mine, applicants in this pool could sit there for months (I know mine have in the past).  An indecisive hiring manager is really no excuse for not giving timely feedback to a candidate.  Just cut the candidate loose and tell them the hiring manager is moving forward with others at this time. 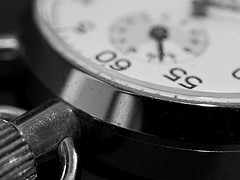 Too many times in my career, I have had applicants sit for months on the back burners.  It just is not fair to them.  And most of the time, they are never considered again anyway.

Do not be afraid to reject someone who might be considered again later.  I would like to say again, from my experience, applicants are thrilled to get a phone call asking if they would still be interested in the position as circumstances have changed they are now being considered again.  Some will say that they have taken other positions, but universally they are happy that I kept them in mind.

Now imagine the other option…days turn into weeks…weeks turn into months.  No word.  You are left thinking…am I still being considered?  If so, why have I not heard back.  If not, why don’t they have the courtesy to tell me.

Let’s put it another way…which would you rather have if you applied for a position:

I would take the former any day of the week.

Another really useful thing to say to candidates awaiting a decision is: "If you don't hear from me for a week, please feel free to call me and check in."  Frankly, having a candidate who is motivated enough to check back a week later sometimes helps me rattle the hiring manager's cage enough to get an interview.  It's somewhat better to have candidates in charge of their own follow-up, I think.

Also, I have found that when I do call candidates and apologize for a delay in communication, I often hear "Gosh, I forgot about that one, no problem."  Most 'high-quality' candidates have enough self-esteem not to consider not hearing from a recruiter such a big deal.  They all have my number and are all invited to check back via email or phone anytime they feel a need...

However, if it comes down to a final decision or choice between two or three people, I will invariably follow up with the news when appropriate.  Rarely do I hear anyone say "how come I never heard back from you?" because I always try to make it clear that I am always available to respond to their questions.

Certainly, candidates are sometimes quite disappointed if they don't get the job, but I always remind them that "it's not about you and how talented you are -- it's about how well you fit the exact needs of the company, including many fairly uncontrollable and sometimes arbitrary factors."  I find that helps quite a bit!

By the way, if I ever encounter a situation where a candidate is 'stuck on the back burner' awaiting a decision for more than a week or two, I will tell them straightforwardly "I really don't believe my client is interested in you at this point.  But, if they are or anything changes, I will be back in touch with you ASAP to let you know."  In that event, if a slow or hesitant manager changes his/her mind, the candidate is often quite pleased to hear about it, but was still free to pursue other opportunities.