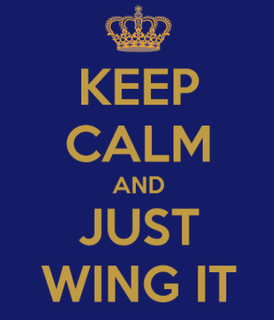 I’ll never forget how I was picked to be the social media expert at my first company. It was 2008 and I was working at a startup called VisualCV.com. I was hired as part of the sales team then moved to marketing when we realized we did in fact need a marketing team. Oh, startups.

Anyway, I was sitting at my desk when our lead investor and co-founder popped his head into my office and asked “How many Facebook friends do you have?” As I told him - I believe the number was around 400 or so at the time, nothing impressive by today’s standards - I could tell he had an idea. “You’ll be our social media expert. You’re young.”

A few weeks later, our newly hired CMO, comes by and a similarly vague conversation ensues: “Do you know what Twitter is?” I had some idea what Twitter was but had very little interest in trying another social network.  Her next sentence is one I’m sure I’ll never forget: “I don’t know what this tweeter is but I think you’ll be good at it.”

Little did I know that being good at “the tweeter” would be the skill that would help me get my next two jobs or that social media would become a whole category of work at agencies and within marketing departments.

Or, most importantly, that it would become an expected part of many employee’s skill set – especially in recruiting companies. Being a Twitter leader in our industry pays off big. Whether you’re hoping to join the next Top 50 HR super stars list, find a new job or try to recruit a superstar, having a Twitter presence people actually listen to is a selling feature.

However, with all of these big aspirations, I know there’s a lot of non-goal-oriented activity on Twitter too. We know now, after years of seeing people and companies really blow it on Twitter, that it takes a lot more than being young or having a lot of friends to be a successful social media presence. Saying something isn’t the same thing as saying something significant.

Now, I don’t think that every tweet even needs to be significiant. Twitter is your platform – use it how you like, without ruining your life. However, if you do have goals to make it work for you, it’s time to think about strategy.

If you’re looking to have your best year ever on Twitter – or to just get back to strategic tweets instead of the random rants you’re posting now, check out our latest free download – Have Your Best Year Ever On Twitter. We outline the tips recruiters need to go from tweeting to tapping into the full potential of Twitter for your personal (and company) brands. 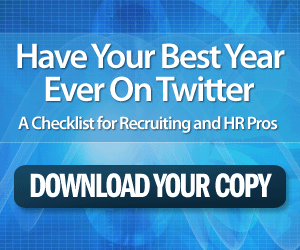 When I spoke about using Twitter for recruiting at last Summers's TMA event on Social and Mobile Recruiting, I explained the 4 Eees of using Twitter:

Here they are broken out,

Know your customers – be able to describe the talent community & its attributes, likes, dislikes, trends, Zeitgeist
Develop a content plan – acquire, create & steward a content warehouse for each talent community (push-analytics)
Foster “great expectations” – by interacting with the same voice you use with your work mates; by being consistent & reliable; by never lying…people will open up to you

The whole is greater than the sum of its parts – a few “out of character” tweets doesn’t raise a red flag if you’re seeking to “include”
Convergent validity – consistent voice, content, “interact-ability” across platforms
Push the interactions – if your Spidey sense is tingling and giving off “positive energy”, push and monitor interactions
Escalate
Levy’s Three Tweet Rule – after three substantive back-and-forth tweets, take it offline with the two most important social media tools…the telephone and the hand shake
What is Your Superior Career Opportunity? – market don’t sell; pipeline before pushing
List them – don’t just Follow, add them to a special list and continue to engage
Explain
Tweet your engagement analytics – “Added # new XYZ Twitter fans to our Twitter Talent lists”; “# of our Followers became real candidates this past week”
Welcome new hires aboard – when someone sourced via Twitter accepts, tweet it out: “@LevyRecruits joined @RecruitingBlogs last past week #TwitterHire”
––––––––––––––––––––––––––––––––––––––
Incidentally, there are 4 core areas of content to Tweet out if you're doing this for a company (and these are the hashtags:
#LifeAtCompany – pics, videos (Vine, Instagram, YouTube), blog posts
#WorkWithCompany – pics, videos, posts with a 360 degree focus
#CustomerOfCompany – when customers tout your products & services…
#CompanyInTheNews – “as it happens”
––––––––––––––––––––––––––––––––––––––
One more thing - tips on how to interact:
Use first names – people perk up
Respectable snark – your company is fun to work at, right? Shouldn’t you be too?
Challenging people won’t make them run away – even in 140 you can have a conversation
Cyberstalking to them is research to us – “@Levyrecruits Steve, just read your profile/blog/policereport. Hmm…”
[guess I'm going to have to expand into a blog post, eh?]

Damn right you need to blog this Steve ;-)

Great post Katrina!   I think the first twitter account is like a developmental milestone now.   I find this site interesting. - https://discover.twitter.com/first-tweet  You can see how some distinct voices started out finding their voice and thousands of followers.