In short, the change means that you are virtually guaranteed to have your recruitment message at least read by a large proportion of Facebook’s massive, and more importantly, very active, audience (that’s 1.5 billion people, 84% of which check it daily, to be precise).

Previously, as most of us know, as a Facebook user if you were to receive a message from someone you didn’t know (i.e. a recruiter), or didn’t share a mutual connection with, it would be sent to your “Other” folder without notifying you.

For recruiters, this was a nightmare when it came to getting in touch with prospects. The only way around this was to either find a mutual friend, or to pay a fee (which ranged from $0.50-1.50) to send the message directly to their inbox. This paid facility had limits and was Facebook’s way of discouraging cold messages, but importantly their approach appears to have changed.

Now, the “Other” folder has been replaced by a new feature called Message Requests. Messages from people you don’t know will show up in your Messenger inbox as a Message Request. The recipient can then read this message without alerting the sender and decide whether to ignore or accept it. 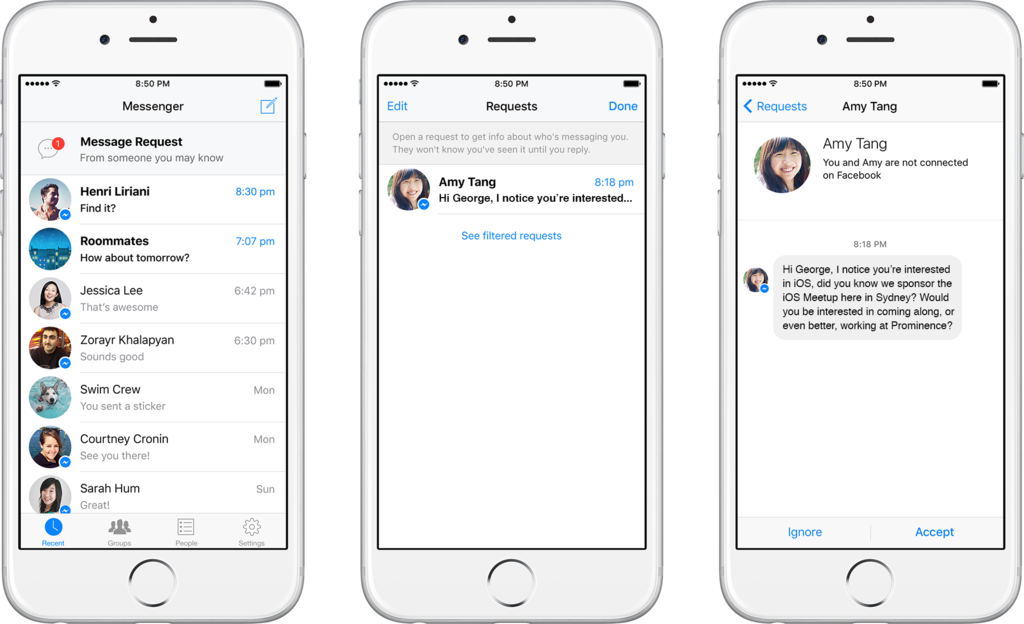 What does this mean for recruitment?

We believe the potential of this new feature for recruitment is massive (just look at the example we mocked up above), especially when it comes to connecting with passive talent. With LinkedIn InMails remaining the most popular cold prospecting tool (email is still favoured for warm leads), it is about time there was another option that, when used correctly, has the potential to generate higher response rates.

Though there will still be some hesitation when contacting candidates on Facebook, as there always is with the more personal focused social networks, the implementation of Facebook Message Requests is a direct acknowledgement from Facebook that people want to communicate with people they don’t know.

A word of caution, recruiters (and the direct marketing spammers) are solely responsible for the demise of InMails, in particular the poor response rates we all now experience. We now have another chance with Facebook messages, and hopefully we are also all better educated on how to utilise these types of tools.

If you’re stuck for ways to personalise your messages, try tools such as Crystal Knows, which allows you to find out more about the personality of your prospects to create more personalised messages.

In their announcement, Facebook also mentions their commitment to combatting spam, so don’t be surprised that if you do send one too many poor messages, you find yourself locked out.

Editor’s Note: We’ve tested the messaging facility and it isn’t currently live for us, but we will certainly be keeping an eye on it.

This was originally published on The Prominence Blog.

Great post Chris, as always. Thanks for the heads up to the community - this is definitely a game changer for social recruiting.

"A word of caution, recruiters (and the direct marketing spammers) are solely responsible for the demise of InMails, in particular the poor response rates we all now experience."

I am wondering why I seem to be one of the few recruiters who has found Inmail to still be functional for me.  On the other hand, in my last search (to fill three positions), I recruited 200 resumes, and only 2 of the 10 final candidates were from LinkedIn, the rest being from my own network and research.

Thanks for sharing this information!

Thanks Nicholas, good point. Response rate varies greatly, a lot of this depends on your sector and how much other noise your targets are receiving. The amount of time spent crafting the message obviously still influences response rate as well. Out of interest does your 27% rate include people who reply to say they aren't interested? Enjoy Crystal, it's good fun.

Thanks Shane, love your FB Search tool, although for some reason (probably to do with language settings) those in the US seem to mainly still be able to use Graph Search.