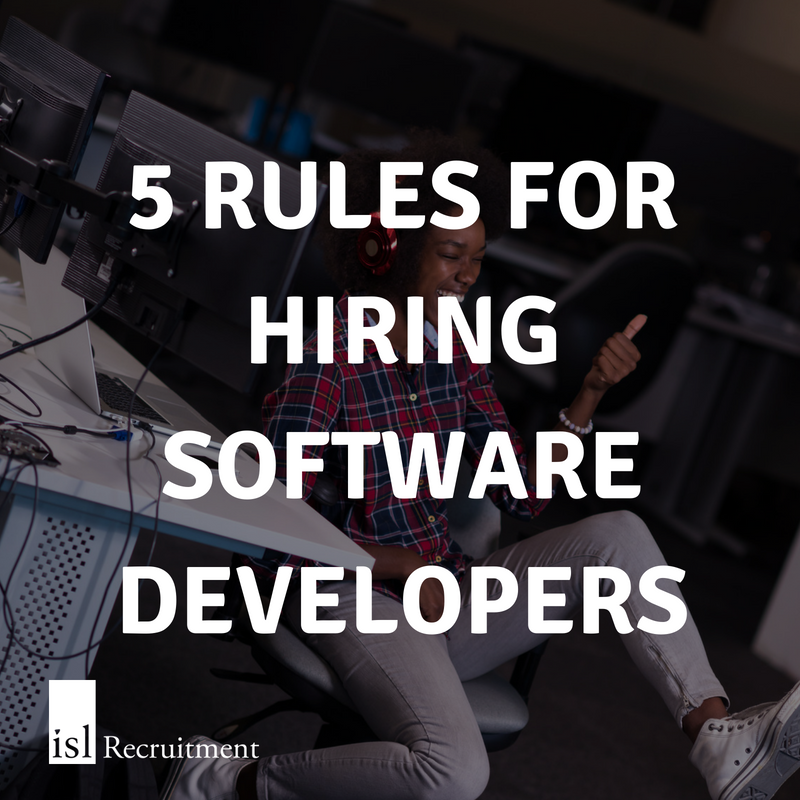 The war for talent in the software development space is hotter than ever. As we now operate in a technology-critical world, every company will need some form of developer; whether this be to design their mobile app, improve their website’s user experience or manage your e-commerce – you need code, and for this you need developers!

The software development space boasts an unemployment rate approximately half of the national average! Engineers are left spoilt for choice and able to demand generous salaries and legendary perks too.

How can you stand out when you’re left to battle with the Googles of the world?

To hang with the big dogs and nab that top talent, you need to follow these seven simple rules:

“One of the worst things in the world you can do is build your first 10 employees with B-level people. You will end up with 100 C-level people. That’s why we hire very slowly.” – Steve Newcomb, CEO, Famo.us.

Go for talent or longevity?

Some people argue that they’d “much rather rent gold than buy silver.” By this they mean, top talent will often move on to greater things and it can be a struggle to retain them for the lifetime of career, even if they’d been with you for years. Some directors say they’d rather accept this and maintain high standards of talent, rather than keep silver standard developers for the long term. Ultimately, this may cost more in training but it all depends on what your priorities are as a business. If you are trying to expand quickly, hiring ‘silvers’ may help you reduce churn and avoid taking one step forward, two steps back. However, if you are looking to consistently increase revenue and grow exponentially – go for gold!

As we have always said, many businesses find cultural fit often as important as coding skills. Directors don’t want highly talented programmers if they come as a package deal with big egos and attitude. Tech teams just want to get work done. Think about it, in the hypercompetitive market where everyone has funky offices and nap pods, their top selling point becomes their teams and culture. Candidates need to have the soft skills to be a team player and the drive to innovate across functions and teams, especially in start-up, agile environments where an “all hands to the deck” approach is essential.

Being a small company can be your secret weapon

Sometimes smaller businesses are more appealing to many top software developers. Ultimately, devs want to get on and code. They don’t want to battle through walls of bureaucracy to get stuff done.

When people choose the Google’s of the world, they are ultimately rooting for comfort and security, which are typically antithetical to the SME mentality according to most developers.

Although the large companies often have large payouts on offer when it comes to financials and perks. However, you can find that many of these can fall short when it comes to less tangible rewards such as project diversity and job satisfaction. Think about it this way; the bigger the company, the smaller your role is likely to be, whilst in a small company you will have a much louder voice and a range of cross-functional responsibilities.

“What motivates the best developer is the work,” says Dan Pasette, Director of MongoDB. Many people are willing to take a bet on a smaller company offering great projects and development opportunities against the standing desk, nap pod culture and security of your corporates.

Software developers want to contribute something useful and there’s no better space for someone looking to drive innovation than in a growing start-up with a great culture and project variety!

So, in summary, if you’re a budding SME with great projects and learning opportunities, you could be the golden snitch amongst a field of bludgers! Top developers see past the shining light of treehouse offices, indoor gardens, and nap pods and just want to enrich their working life with projects that challenge them, teams that complement them and development opportunities that will help them grow.

If you are however a large corporate with high application rates and an ever-growing need for developers, it’s important to ensure you’re hiring in a way that suits your long-term goals. Do you need the piece de resistance of developers for up and coming projects, or would the ‘silvers’ of the world, who will more likely stand by you in the long term have a greater benefit to your business?

This article was originally posted on the ISL Recruitment blog.

You can read the complete and original version of this post here.