A blog about my dog (...and recruiting) 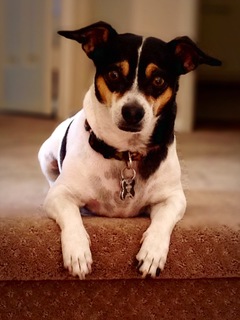 Almost exactly one year ago, my husband and I adopted our little fur baby from the local animal shelter. We both grew up with pets, but this was our first (and only child) together as a couple. Our sweet guy, Hurley, immediately became a part of our family and dramatically influenced our official new lifestyle as doggie people.

As his one year adoption anniversary approached, I wanted to come up with a way to celebrate how much love and enjoyment he has brought our way. The timing of that occasion happened to coincide with me trying to come up with a new article topic. So, my plan here is to explore similarities between the talent world and shelter animals

Shelter animals are often overlooked, neglected, abandoned, or abused, and in need of a second chance. Many people are afraid of the potential baggage they may have from past trauma or lack of proper attention, care and socialization. Many people also have stringent requirements for a specific gender, mix, size, color or personality of a dog. Some people prefer puppies to older dogs. Some people believe pure-bred animals are better than mutts.

While we don’t have his full story, there were hints that Hurley didn’t have it easy before joining our household. We don’t know why he was surrendered or how he was treated by his previous humans. When we found him he was one of the longest residents at the shelter and had been transferred there from another shelter where animals have minimal chance of adoption. We don’t know why no one else selected him. We’re just glad we did.

When we went to the shelter on that particular day, we had a general idea about preferences, but no specific or absolute criteria. We wanted to remain open minded about making a selection. Something about Hurley stood out. He seemed mellow, not barky and hyper like the dogs on either side of him. He also had unique markings, a nice coat, cute face and an adorable curled tail.

However, when the shelter worker brought him out to spend time with us, Hurley seemed a bit aloof, not exactly friendly or interested in hanging out. I got the sense that he was probably a bit despondent about the entire situation, living in a concrete cage, surrounded by barking dogs day in and day out, and only interacting with strangers for several months.

Because of his ambivalent attitude, we were concerned that he wouldn’t warm up to us. Another shelter worker came along to join us and suddenly Hurley’s demeanor shifted. He became more energetic, playful and attentive. Seeing that different behavior convinced us that he just needed time and perhaps a familiar face to cheer him up. We took chance and took him home. We made the right choice.

So, by now you’re probably thinking… Cool story, bro… After all, Kelly, you did say this would have something in common with talent topics, right?

Yep. It sure does… Here’s how the similarities play out.

Shelter animals represent the under-valued “active” job seekers, long-term unemployed and underemployed members of the workforce. Recruiters and hiring managers tend to prefer the elite pure-breds with impressive academic and career pedigree from prestigious organizations. In their eyes, those others are/were likely rejected for good reason.

Similar to shelter animals, certain workforce castoffs and misfits may have come from dysfunctional or abusive environments and wound up through no fault of their own forced into less than ideal surroundings and circumstances. They are further dismissed by those who would never take a chance on someone with a “questionable” past. What a shame on all fronts.

Recruiting requirements are sometimes extremely rigid and many times unnecessarily focused on superficial criteria and snap judgments rather than a broader array of possibilities. Just like most animals are capable of being loving and loyal, plenty of the overlooked job seekers would fit right in, right away and eliminate the need to pursue the elusive perfect fit. They just need the opportunity to do so.

Not unlike a shelter animal missing out on stability or a sense of belonging, job seekers need signs of affection, or at least attention, in order to reciprocate. During a series of cold job interviews with stranger after stranger, job seekers may lose enthusiasm for the process, especially if they are rejected over and over for no apparent reason. When the right atmosphere, interaction or energy comes along they may perk back up and show much more potential.

What if instead of constantly seeking unobtainable perfection or intentionally ignoring anyone that doesn’t initially strike your fancy, you think about all of the deserving creatures out there of all breeds and backgrounds?

It’s a honor to be Hurley’s parent and I wanted to honor him and other shelter pets like him with a different kind of post. Taking a chance to give someone (furry or otherwise) a chance is a great feeling. Give it a try.

By the way, Hurley is a badass squirrel hunter/chaser and doesn’t even care if they’re brown.

Kelly,  Great post!  I love the viewpoint you take.  It really twists the perspective around.   I guess sourcing passive candidates is like heading to the dog park and trying to befriend away a puppy from his owner.  Fido's perks would be naps in the sunshine and table scraps nightly...

This is a fantastic analogy and very true! Everyone has to start somewhere right?

I think by providing more a consultative service when recruiting, you are able to get to know your candidates more, which avoids this happening as much.

LOVE! :) I too am the proud momma of a shelter dog - she's a total pain in the ass but I love her so much. So very true Kelly!