A Horrific Tale of Candidate Experience

I was just reading an article that I sincerely hope isn't true. It's written by a job seeker about his worst job interview. Here's how it begins: 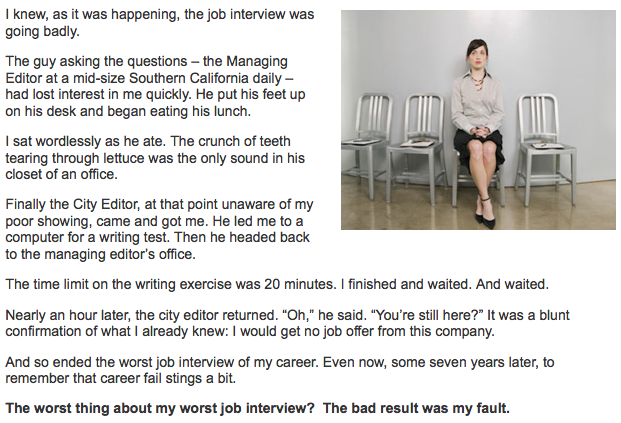 The interviewer put his feet up and began eating lunch? Then the candidate was asked to complete a writing sample and was forgotten about?? What a horrifying candidate experience!

The worst thing about this candidate's worst job interview? He doesn't even realize that this kind of experience isn't ok. Maybe he was desperate and unprepared - but that's no excuse for the way he was treated. This brings to mind an article I read last year on HRFishbowl about candidate courtesy: "you just have to show a little respect". The premise of the article is simply to encourage basic communication. Let the candidate know where they stand.

If you know you're not interested, say so. Even if it is 10 minutes into the interview and the candidate hasn't given a writing sample. Don't waste people's time. This is common courtesy. It's ok to say, "I'm sorry, but I don't feel that you're the correct candidate for this particular role and I don't want to waste any more of your time". Don't be a wimp - tell the candidate that they're no longer in the running for the position. However, I would also encourage you to perhaps soften the blow a little with some constructive criticism. In this case, the editor could have let the candidate know that he wanted someone that wanted to work hiscompany, not just any company. This sort of advice would have helped the job seeker learn from his failure.

Especially in this case, the job seeker had never had a full time position before and was simply unprepared from lack of experience. Recruiters should understand that younger candidates don't have interview experience, and don't know the rules. Even more seasoned candidates might have recently rejoined the interview circuit, and are slowly relearning how to interview correctly. Not everyone is a great interviewer, but most get better with practice.

Think about your first interview: were you nervous? Did anyone tell you to write a thank you note? Did you print out several copies of your resume and references? Did you know that, when asked for your weaknesses, that you should spin it in a positive way? Try to remember what it's like to be a candidate.

If this candidate had more interviewing experience, he may have gotten the role at this company. He got the next one he interviewed for. A bad interviewer doesn't necessarily make a bad employee, so don't let simple inexperience get in the way of hiring someone that could actually be a great addition to your team. And for goodness sake, treat your candidates like human beings.

We have an expression in our office:  "What you witness in the interview is what you can expect when you work there."