Ask WHY not HOW 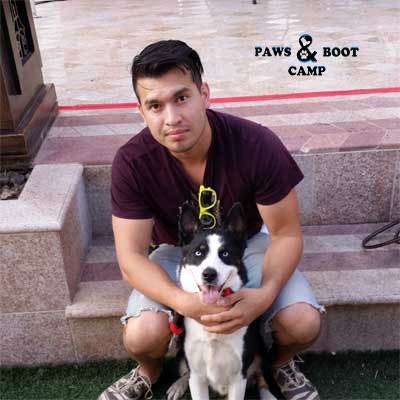 I’m super excited to be writing my first “Spark Series” post! Just as a reminder, my spark series is all about me going out and talking to my network of friends and acquaintances. Simply getting to know them better and learning about their current journey and, in doing so, I’m hoping they will either “spark” something in me or possibly their words will inspire others.  This isn’t a new concept, I originally stumbled upon it on from this website so I thought why not give it a try.

When I initially decided I was going to do this, the first person that came to mind was one of my long time college friends, Jose.  Jose and I go back to my sophomore year in college where we met through Greek life. I recently reached out to him to explain what I was doing and, of course, he was more than willing to share his story. He even said, “No need to send it to me to proofread, I trust you.” Good thing I didn’t write about that one time we dressed up in all white and brought silly string to a party! Insert throwback photo because we thought we were so cool.

No but in all seriousness, we reunited last week at Lyfe Kitchen and proceeded to quite literally catch up on life. Instantly, I was reminded of why we were friends in the first place. Jose has such a kind heart, he’s funny and he creates an analogy for every situation, seriously they’re awesome and he’s awesome.  For example, he compared starting your own business to logs in a fire.  When you barely have any logs it’s really hard to get the fire started, you begin to doubt yourself a lot.  But a fire surrounded by many logs will eventually become a strong fire and will be much more difficult to stop.

Ever since Jose can remember he's always had an infatuation for playing sports. He isn’t drawn to any specific sport, he loves to play them all.  He told me his love for playing sports was one of the main reasons he joined a fraternity.  It was about two years into college where he found his passion for fitness.  However, he didn’t want to be a trainer because he wasn’t crazy about watching people work out and he wanted to really feel like he was making a difference.

Then, his whole world changed when he rescued a dog named Kodiak.  Naturally over time he became a dog person. Just knowing what Kodiak endured before he rescued him, thinking to himself that there are millions of dogs going through the same conditions or way worse made him feel compelled to do something.  So he combined his two passions (fitness and dogs) and just like that Paws & Bootcamp was born!

Last April he quit his full time job at Trader Joes to pursue his own business. He admits he slacked off the first few months because he lacked the drive.  He said it was very hard at the beginning because no one knew about his business and he didn’t know exactly how he was going to build it.  He said "In today’s society sadly you don’t call your friends anymore, you just happen to see their check-in on Facebook…it’s the new word of mouth."  For him something was missing.  So he began to learn more about marketing and social media and started to surround himself with like-minded people, for example, earlier this year he went to a fitness summit in San Diego.  He said it was so motivating to see people who were once doing far worse than he was in their business and now they are killing it.  That was when he discovered he needed to know “why he wanted to do something” not how he was going to do it.

“Once you know your why, everything else falls into place.”

Today he has over 20 clients and his business is continuing to see a steady growth.  The way Paws and Bootcamp works is the owners perform various calisthenic exercises while their dogs complete various agility obstacles.  Each session is 30 minutes long so he said to expect an intense workout without breaks! Jose focuses on fitness first by offering a fit test every month for all of his clients.  Once they start to see some progression then he’ll introduce making changes to their diet.  He truly believes that you have to“change your mind first before you can change your body.”  He invests a lot of his personal time with his clients.  Seriously, he even sends them friendly reminder texts/calls to hold them accountable. He said once they know “why” they want to change then he can truly help them. Again, “start with why” (I’m beginning to see a trend here).

Lastly, and this part is my favorite, he has all of his clients “check-in for a cause”.  Basically after every work out, they check-in and share the post on social media. At the end of the month he totals all of his client’s check-ins and then matches $1 to every check-in. He then donates the proceeds to a local charity. His clients feel compelled to check-in because they know they are also contributing to a greater cause, plus as he already mentioned, this is great and free advertising.  Just this month, Jose was able to donate several collars and leashes to Incred-A-Bull, a non-profit organization who’s fighting against breed discrimination through education, advocacy and low cost services.

In closing, here are a few things that were sparked after meeting with Jose:

Jose thanks for letting me write this piece and for being an inspiring friend.  Keep kicking ass and thanks again for your insights!

“Feeling refreshed and motivated, going to take Benson out for a walk now” - Bates

Thanks for reading! View the original post here: http://bit.ly/AskWHYnotHow