Embrace your mistakes and keep chasing your dreams 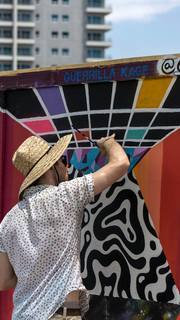 Next up in my Spark Series is the very talented Mr. Eric Vozzola.  Eric, like myself, was born and raised here in Las Vegas, NV.  I met Eric in college, where we connected in Greek Life at UNLV (shout out to Greek life where a majority of my network comes from).

I had the opportunity recently to meet up with Eric over a cup of coffee and learn about his remarkable journey.  I asked him: “At what point did you discover you wanted to get into art?”  Eric told me that he loved to draw as a child; however, when he hit middle school it was kind of frowned upon and seen as the “uncool” thing to do. So he suppressed his love for drawing for a while.  It wasn’t until one night in college when he was hanging out with a few of his best friends and they all began to draw that they discovered how talented Eric was.  One friend said “wow, you can draw! You should take an art class in college.”  Eric took them up on their advice and enrolled into an art class. After excelling in it, the following semester he submerged himself into art.  It was at that moment that he realized, “Yes, I need to keep doing this. This is who I am.”  He then went on to graduate with his BFA in Graphic Design and Studio Art.

Right out of college Eric landed an internship with a small design agency, called Carvalho Creative, based out of Emergency Arts, which is where he continued to master and fall in love with graphic design because of the clean and impactful end result.  However he wanted to figure out a bridge between graphic design and fine art.  After about a year and a half he was laid off from that small design agency so he began to freelance for a few months. Shortly after, Eric came across his current job as a graphic designer at The Venetian.  He loves the stability of his current job and still being able to freelance on the side with painting and art.

Eric enjoys finding inspiration out of everything and immersing himself in art and design.  One thing that has always fascinated him was he wanted to figure out how to paint large scale in a local environment.  So he began doing some research and started to look into some of his favorite artists. It was about the time when music festivals were taking off that he took on his first public art opportunity downtown, and was commissioned to paint apartment complexes. For Eric, street art and urban art began to flow organically because of the parallels to graphic design.  He suddenly found that bridge he had been looking for.

From that day forward he started to volunteer his time and connected with more people.  Eric has put on local art shows on his own, been involved in bigger art events such as Guerrilla Kage at Vegas's First Friday, and livened up the community by painting planter boxes, power boxes, and an amazing butterfly display at the Springs Preserve, just to name a few.

Eric is a very hard worker and has some exciting upcoming projects lined up.  He was actually just announced to paint a mural in our very own local festival, Life Is Beautiful.  This is a huge accomplishment for Eric and I couldn’t be more excited for him.  Ever since Life Is Beautiful started in Las Vegas, about three years ago, he had tried getting his foot in the door to be a featured artist.  He started by making posters for the festivals as a passion project and he got a huge response for them. A lot of his friends were buying them from him.  Even though he didn’t get in as an artist the first couple years of the festival, Eric never gave up.  Just this past month he submitted a big proposal to Life Is Beautiful and now he is painting a mural for them!!  His persistency and hard work paid off, way to go Eric!

In addition, this October he’s painting a whole building down by the Neon Museum. Check out the RFP on this project to give you a better idea of what it entails.  This will easily be the biggest project he’s ever done.  He will have to direct a team of volunteers to help paint it and they’re planning on using it as a landmark.  How freaking cool is that?

Lastly, through the city he applied to the Winchester Gallery, which is a big gallery for local artist. They accepted his application and he has another solo show set for July 2016!

Eric’s work is very unique.  He uses found objects, things that may be thought of as trash and paints beautiful images on it.  It truly speaks to urban art.  When I asked him “where do you get your inspiration from?”  He replied from traveling. He said he’s obsessed with nature, the sky, and the natural world. Eric allows himself to be inspired by anything around him and he keeps an open mind.

In closing, here are a few things that were sparked after meeting with Eric:

Special thank you to Eric for letting me write this piece on him. When I first sat down with him I had told him that I’m probably the least creative person I know. However, after our conversation he really inspired me and reassured me that everyone is creative you just have to start somewhere.

“Feeling artistic, I think I’m going to give this whole drawing thing a go” - Bates

Thanks for reading! View the original post here: http://bit.ly/sparkseries2