Bullhorn S Release - The Fastest & Most Powerful ATS Ever Built?

S Release is built for the Cloud and promises the best of MaxHire, Sendouts and Bullhorn

Last week, the marketing team at Bullhorn sent Sendouts customers an email announcing the launch of S Release, the next version of Sendouts.

Built by the combined Sendouts and Bullhorn development teams, S Release works in any browser and is the fastest and most powerful ATS ever built. Our initial users of the product have already seen staggering results from S Release: a 50% increase in activity, a 25% increase in interviews, and up to a 43% increase in placements.

I would argue that the staggering statistics provided have more to do with a more intuitive platform and overall better training on the system during roll-out of the new product, rather than improvements to the back-end technology itself.  However, if the new design and improved interface leads to better adoption and therefore increased use of the tool, isn't that the whole point? If anything, the numbers provided by Bullhorn may be the most concise and convincing picture to date of what can happen when recruiters actually use the full capabilities of an organization's internal ATS/CRM. 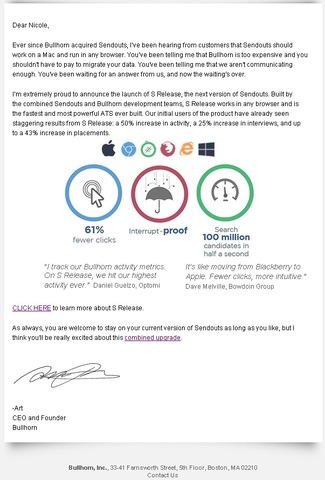 I was not happy when Bullhorn acquired Sendouts and Maxhire in November, 2012. The search functionality and integration with our existing technology wasn't an option with Bullhorn. We had actually migrated to Sendouts from Bullhorn years ago for many reasons, including some of the issues acknowledged by the Bullhorn marketing team in the email announcing the new release:

It was a long wait without answers. I am cautiously hopeful that with S Release, I may be able to be one of the few people that can say "I love my ATS"again. It was always fun to sit with a room full of recruiting leaders and be the only raised hand when that question was asked!

You can see more about S Release here.

Great write up, Nicole.  Appreciate your adding your experience as an actual end user to this product news - really insightful perspective.  Can't thank you enough for sharing this here.