During the last three years TalentBoard, a US non-profit overseeing the Candidate Experience Awards, has been collecting data that the organization’s volunteers involved in the process are only now dipping into. In 2012, 44 of the 90 participating employers invited and obtained comprehensive information from 17,000 of the their candidates. This is one of the many questions being studied.

TalentBoard’s 2012 Candidate Experience Awards* (CandEs) 90 employers described their recruiting practices and, in doing so, raised some new questions about whether Employee Referral Programs (ERPs), often cited as the most valuable source of hires are actually underutilized.

According to the data, employers may be focusing too much of their ERP attention on getting their employees involved and too little attention on the candidates awareness of the importance of referrals and their growing capability to initiate a referral from an employee.

It also likely that that neither the candidates nor the employers are fully aware just how much more likely a person is to be hired if they obtain a referral.

Half of the employers participating in the CandEs told us that they consider their ERPs a competitive advantage and use it extensively (50.6%). Another quarter consider their ERPs a routine part of their recruiting strategy (28.4%). Only 13.6% of the responding firms had limited the use of ERPs and only 7.4% claimed they didn’t use Referrals at all.

The CandE employer survey did not ask exactly how many hires they attribute to ERPs each year but CareerXroads’ annual Source of Hire study indicates that for the last decade, ¼  to 1/3 of all openings attribute Employee Referrals as the primary Source. (The distribution tends to be bi-modal and cluster around 20% and 40%.)

Talentboard’s candidate survey also included several referral related questions including whether the person was ‘aware of’ and ‘used’ the referral process of the employer they applied to. The 8953 candidates answering ALL these related questions also shared whether, in the end, they were hired or not.

We thought that if ERPs are by far the most successful approach to sourcing candidates that large numbers of candidates especially at the professional levels were aware of that fact.

We were wrong. In practice, employers only inform employees about referrals. At all levels, from candidate applying to hourly positions to executive levels the following was found:

The conclusion is that few job seekers apply for a job with a referral, and yet most of them could find one using today’s social media tools- with very little effort.

While we don’t know the percent of candidates who initiate referrals versus those that are initiated by employees, we do know that most of the information about referral programs are focused on getting employees, not candidates,  to reach out.

While these candidate respondents are not necessarily a representative sample, our ability to answer the question; “Just how important in the US is it to have a referral as a candidate?” is closer at hand.

What this means to the geeks among us (see the table below) is that by having a referral, a candidate is 10X (27.9%/2.8%) more likely to get hired! (We think this is a very conservative conclusion). 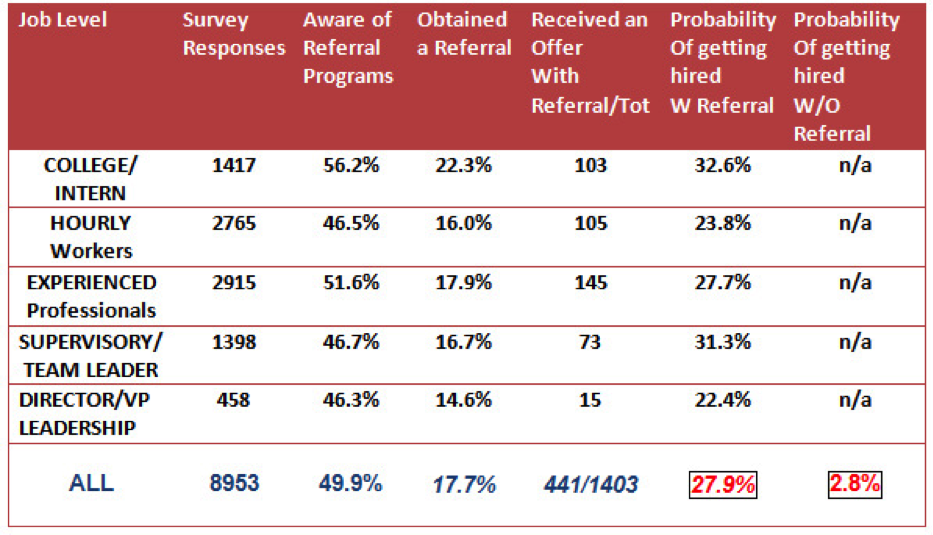 A firm’s Employee Referral Program’s success rates can hardly be ignored and yet, given the data, candidates are doing just that…and possibly limiting efforts of firms to scale this source. I think that while most employers don’t ignore the data, they do take the value of their ERPs for granted and fail to fully explore the candidate side of the equation.

One of the few firms in the US offering a clue about their ERP’s importance is TIVO. In their “Common Questions” section of their Careers pages, TIVO tells prospects that 39% of all their hires in came from Employee Referrals in the last year….and then tells them how to get an employee to refer them! A candidate reading this cannot help but recognize what they need to do to improve their chances.

It isn’t much of a leap to conclude that employers can improve referral programs by giving more attention to candidates, who, with information, an incentive, a little coaching and a few social media tools, might initiate many more referrals. (And then employers might want to examine whether some types of candidate initiated referrals are more or less predictive of future retention, performance, etc. than those initiated by their employees.)

Candidates should know, at the very least, how a firm’s Employee Referral Program works and how successful it is.

The Candidate Experience Awards are part of a growing movement to define and measure how employers treat job seekers from the point at which they are researching a firm and choosing whether or not to apply to the practices surrounding the new-hire on-boarding process.

Now in its third year, the 4 month campaign for 2013 saw 140 firms registering and sharing their practices in an effort to benchmark the Candidate Experience. The 90 firms choosing to invite their candidates to complete a detailed survey received more than 46,000 responses by mid-September, 2013.  2/3 of these employers will receive an award October 7, 2013 at the HRTechnology Conference in Las Vegas and a full report will be issued by year end.

(Full disclosure: Gerry is a co-founder and board member of Talentboard, a non-profit that does not charge for its research)

I'm rather puzzled why we have a SourceCon and not an Employee Referral Con, since a much greater percentage of hires typically come through ERs than  through sourcing. However, until a company credits ER hires to internal.contract recruiters the same way other types of non-3PR hires are credited to tem, recruiters will regard ER hires at best indifferently and at worst as something which hurts their interests.