What Makes You A Great Recruiter? @levyrecruits

[Before or after you read this missive, be sure to read Derek Zeller's "You're Not Really A Recruiter"] 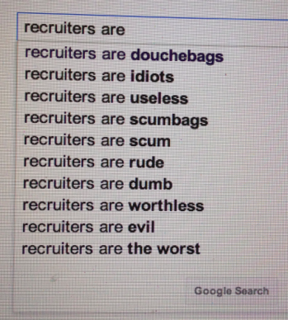 Great, you filled a job. That makes you a recruiter?

Hey, you can write a Boolean string. That makes you a recruiter?

Hot dang, you sent a hiring manager an email and they agreed to interview your candidate. That makes you a recruiter?

Whoop-dee-doo, you pinged 217 people via LinkedIn and 3 were interested in your job. That makes you a recruiter?

Yep, you subscribe to RecruitingBlogs. That makes you a recruiter?

You’re “knowledge deficient” but you know all the buzzwords. That makes you a recruiter?

It’s on your business card, LinkedIn profile, Twitter bio, even in your Alumni newsletter Class of 2011.

In survey after survey, companies bemoan the paucity of talent and the difficulty getting superstars to join their organizations. Hiring managers privately venture to their boss, HR or even the CEO about how recruiting isn’t being responsive to their needs. Do I even need to ask you to search the Internet for “recruiters are ”?

This statement is likely to hurt: I’ve been on the conference circuit the past year and my primary takeaway from speaking to and mingling with recruiters (not to mention the work-related interactions) is that we are approaching an era where the haughtiness, insularity, stupidity, self-importance and self-righteousness of recruiters has reached an all-time high.

That odor that many recruiters can’t seem to smell is the rotting stench of their employment brands caused their mishandling of talent (funny – we call them “talent” but rarely human beings). What’s worse is how the pungency of the stench increases in and around DigitalTown as these humans with feelings share their opinions about your company online – or not (so many jobseekers have become fed up with employers that they don’t even bother to let folks know about the “greatness” of their candidate experience). But your Glassdoor metrics are improving because you’re cajoling your lemming employees to write great reviews that water down reality (you don’t really believe most jobseekers drill down into your ratings, do you? To them, a highly skewed 4.5 isn’t highly skewed – it’s a 4.5). It’s like many a New England Patriots offense play – bending but not breaking the rules.

C'mon Man, just because no one is speaking honestly in public about their experiences with their companies doesn't mean all's hunk dory. As a recruiter, you should know how to glean honest feedback from the people whose lives you touch. Given the graphic at the top of this post, would you say we're doing well as a profession?

Then there’s this: You're either client or source.

This is a pretty pathetic tagline for profession – you’re either a friend or foe:

Agree to work with me and I’ll try and find you someone to fill your opening; rebuff my revenue advances and I’ll try to recruit away your best people – it’s your call buddy.

While there’s an element of accuracy here, how different is this from any other form of blackmail? And who gets caught in the middle? And do we want to be lumped together with people whose primary mode of operation is extortion?

Such overtures from many in our profession leave me feeling so warm and fuzzy. You?

Again, are these people really recruiters?

So before I excoriate more people with recruiter job titles, let me ask you a very important question: Do you truly care about the profession of recruiting?

If your answer is a resounding “YES – YES – YES”, then I have another question for you:

Is it time to formally create a global standard and association for recruiting? Or at the very least, start developing definitions of best practices?

It sure is (I’m for starting with a “dynamic best practices” initiative – more in a later post).

For the past 15+ years, I’ve been involved with many nascent online recruiting sites and forums. I’ve added content to the art and science of recruiting; if you’ve ever asked me for advice about any aspect of recruiting, you know how much time I’ve given listening to your questions, assisting you with your challenges, even showing how to find – and engage – the people others have said don’t exist.

You know that even on nights and weekends, I’ll meet or take calls from any sourcer and recruiter and help them to become better “consumers” of our profession; I even reach out to sourcers and recruiters when they’ve committed what I believe to be are one of many mortal sins of recruiting (a later post). These calls or coffees are all about discussing best practices that produce wins for everyone.

Early this afternoon, I had a Skype chat with a well-known sourcer about an advanced, somewhat esoteric LinkedIn search issue where we ended discussing the issue – as well as other sources that were new to her – for nearly one hour. Her initial ping wasn't about spending an hour talking recruiting – but it turned into something that was all about learning and “bettering” our respective existing best practices. Great recruiting is about knowing that you’ll never be great if you aren’t always learning something new.

I don’t know why I care this much about the potential for great recruiting – or why I’m so darned annoyed when less-than-average recruiting rears its ugly face.

For certain, it’s my nature; like most of my non-recruiting friends (FDNY, NYPD, Jones Beach Lifeguards, Federal agencies, Military), we have a first responder mentality: We’re running in while others are running out. I guess it's just how we're wired. For sure, there are quite a few like me in recruiting – and somehow we've found each other.

According to my pal Janice Presser of Teamability fame, people like first-responders are highly coherent Action Movers with secondary roles as Explorers and Vision Movers. As Janice writes,

They much prefer to teach others how to fish than to just feed them, so casual expressions of coaching and mentoring come naturally to them. They are results-oriented and hands-on accomplishers of the mission they are given.

As I think of the recruiters around the world who are beginning to unite on this best practices and association mission, so many of them fit the Action Mover taxonomy to a tee. I’m not surprised. There's no glory in doing this – but there is satisfaction from knowing you've done all you can to give your progeny a chance to do great things.

All this brings to mind more questions when pondering today’s state of recruiting:

Do less-than-average-recruiters have a conscience of excellence? I wonder.

What happens when your eyes and ears want to coach and mentor people who don't recognize that they need coaching and mentoring? Many don’t want such help.

What happens when you witness recruiters committing such egregious strategic and tactical errors that these pain you to your core and instead of laughing you almost feel like crying because it feels as if they're hurting the people you love?

What happens is that you recognize that it's time to put in place a best practices structure – not necessarily a certification nor licensing – to your vocation in the hope that it stops the downward slide of our profession.

It also makes you question if you can continue to work in a profession where the values, morals, and attributes associated with excellence are dipping into mortgage broker and used car sales territory.

Yes, after a two days of hearing people tell us how they have the technology to fix recruiting while at the same time others are telling us how great they're doing produced a Saturday morning I-don't-know-if-I-can-do-this-anymore headache. Who really cares about the greatness potential of our profession?

But then my pal Rob McIntosh said this morning, “Recruiting is the easiest job in the world until people get involved”; and after that first cup of coffee I thought to myself,

Comment by Derdiver on February 9, 2015 at 6:02pm
Brilliant! The conversation is coming!

The only problem with forging a set of "best practices" is that it will take a majority vote to do so, and by the very nature of your discussion, it appears that you think that the majority of recruiters are bad, so what good will it do to achieve a consensus?

The problem with trying to regulate an industry of mavericks is that mavericks don't like being regulated... and, at least theoretically, it would clearly be in the best interests of inferior recruiters to band together to prevent more successful recruiters from conducting business the way they like, at least potentially.

It's not that it's a bad idea, but you might find that most of the best recruiters aren't interested in letting other people tell them how to do their job.

"A camel is a horse designed by a committee."  -- old saying.

Man, I love this.

Nick, mavericks sure don't like being regulated - but I'm not a fan of regulation. The concept of "best practices" though is a different story and portends something different - that of a learning culture. It's not about a majority vote - heck, just think about the Common Core concept in eduction - but about identifying a problem as well as ways to solve the problems. It's a line in the sand where many of us have said, "I'm sick and tired and not going to take it any more!"

This is the beginning; if we don't do something then we sure as heck will be looking at the end.

I still maintain that one of the most difficult searches we ever undertake is to find other good recruiters. Why is this? What is it so hard to find "good" in our profession? I've talked to many about this very thing and part of the answer lies in the fact that there is no foundation for what it means to be a recruiter. There's no BS degree in Recruiting. There's not widely recognized certification like the CPA. You can come into this profession from any angle, with any background, at any time. You can start on the agency side, where how you are trained and practices like "friend or foe" are drilled into your young recruiter brain. You can start in HR were often recruiting can be viewed as a chore, rather than the strategically significant function if plays. And because of the lack of foundation, we are adrift.

In my view, any move in this direction is a welcome change. Don't let the "this will be hard" commentary hold you back.

Funny enough most recruiters are not mavericks. They are order takers and spammers. They can not converse on the phone and are ill equipped to not only find talent but to make the placement. They are arrogant and when they don't get their way rude to the client and customer with little recourse. This needs to change. I am with Steve, "i'm sick and tired and not to take it anymore" as well.