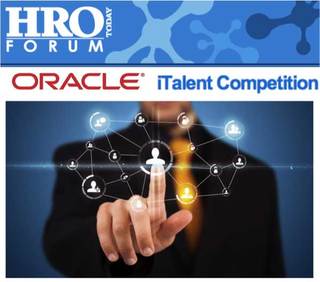 Recruitment technology has largely been a laggard in both innovation and adoption, several years behind the consumer curve.  But as last week’s iTalent competition at the HROToday European Forum in London clearly demonstrated, the tech gap is quickly closing, with many of the best and brightest entrepreneurs in the world increasingly turning their collective focus to finally solving the problems inherent to the business of hiring.

The five finalists chosen from dozens of entries had seven minutes to pitch their product to an audience of potential customers and clients.  That meant distilling months of sweat equity, a passion for product approximating obsession and the nuances of complex enterprise technologies into the simple, sweeping terms.  Talk about a challenge.

As one of the judges on the panel, I had the chance to take a sneak peek at some of the hottest technologies on the market.  The first two, Cahootify and PathMotion, while solid technologies, failed to rate in the top 3 in voting, based largely on the fact neither seemed particularly innovative, filled areas in the market where solid alternatives already exist, and have questionable long term viability.  This aligns with the criteria for judges, who were asked to score each entry on a scale of 0-2 based on five equally weighted categories: business model, viability, sustainability, innovation and usability.  These classifications – and the judging methodology – were highly subjective, but surprisingly, the judging was consistent and the best of these best-in-class products were awarded the recognition they deserved.  Qualitative and quantitative, for once, seemed pretty much aligned.

Here's a brief overview of two recruitment technologies worth watching; while neither cracked the top three iTalent finalists, their selection from some pretty steep competition proves that they're at least worth considering when taking a look at the HR Technology market.  Check back tomorrow for the top 3 finalists: FreshUp, Joberate, and Pando by Aspen Advisors.

Overview: “A social recruiting platform combining enterprise software that supports employers in efficiently building and managing freelance talent pools with a professional network for freelancers to support each other on collaborative projects.

Review: As yet, Cahootify has mainly targeted “independent professionals” to fill projects like assembling a film crew or turning an idea into an app. Which is a pretty crowded marketplace.  But they’re now repositioning themselves to enter the employment market as a “professional network” for hiring project teams around social profiles.  It’s basically a LinkedIn targeting the workforce’s growing percentage of free agents, and like LinkedIn, its move to employment makes it more or less a job board with a social UI.

The problem with this is that in building a fairly good consumer product, it’s heavily reliant on building a large and engaged user base, positioned as a reliable destination to connect with other freelancers and collaborate on gigs, ad hoc or otherwise.  Throw employers into the mix, and you’ll turn a site that’s built traction around concepts like community activism and creativity into a headhunting hunting ground.  On social, recruiters screw everything up, as a rule, although obviously they outpay the indie producer looking for a good sound guy any day of the week.

So that changes the dynamic of the site, and in so doing, seems to erode its business model, which is driving consumer sign-ups and maintaining a destination platform while creating a congruent product for employers which allows them to find and engage freelance talent.  Which is more or less what inMail’s for.

Overview: “PathMotion (http://www.pathmotion.com) - the first frictionless platform for organisations to involve their employees in the recruitment process. The Facebook app called ‘Career Inspiration’ is sold as a SaaS toorganisations, and allows candidates to not only browse jobs, but also learn from the career stories of employees and interact openly with them in a Q&A fashion.”

Review: PathMotion works exclusively through the Facebook API to create an embedded Careers app, similar to Branchout or BeKnown, allowing employers to search for companies and jobs directly from Facebook.  Nothing new there.

What differentiates PathMotion is that it not only allows for branded employer pages, but also offers a platform for employee ambassadors to engage directly with candidates and answer their questions about what it’s really like to work at their company.  Think: Quora for careers, in a branded environment emphasizing real employees in real time, similar to a Glassdoor.

The company actually has an impressive proof of concept, with global employers like Deloitte, BDO and Citi leveraging the software to connect their current workers directly to candidates.  A year in, PathMotion reports that such accounts have led not to more applicants, but to “better quality applicants” who are more likely to fit into a corporate culture and select in or out based on their interactions.  PathMotion also adamantly maintains that it’s “not a sourcing company,” and it is, in fact, a tool designed with enterprise recruitment branding in mind.

This product serves a real market need, but despite early returns, the concept of building “brand ambassadors” for employers on social networks like Facebook is nothing new, and the problem isn’t related to platforms.  It’s unlikely that, all anecdotal evidence aside, the average employee is actually going to take the time to make PathMotion meaningful.

Since user adoption here will inherently be driven through the hiring function, and employees know HR is watching, the actual value of the insights on the companies paying to be featured on PathMotion are dubious at best.  The other problem is PathMotion’s entire existence is completely predicated on Facebook’s API, which means that should Facebook for any reason switch off access, it’s entirely game over for PathMotion.

Check back tomorrow for RecruitingDaily’s round up of the top 3 iTalent entries in the second part of our series.

Interesting. I could definitely see large corporations benefiting from greater employee engagement in the hiring process--the actual recruiting piece still has to be human, though--always nice to have that job security.

Pathmotion is an interesting idea, but HR professionals are not going to respond truthfully when engaging on behalf of their employer, with their corporate or personal facebook account. I can't see employees gaining much benefit there--Glassdoor is a much better tool due to anonymity. IMO facebook just isn't the right tool for creating a recruiting-oriented network. People want their personal and professional life to be separate, especially if you work at Deloitte, Accenture, etc.

Tim - couldn't agree more with you on the point about Facebook being an engagement vehicle - thing is, they have proof of concept, but I'm actually guessing that since those firms mentioned only are in the EU, this might be a cultural difference more than anything. But yeah, over here, no way does that work - the gatekeeper mentality is too great a hurdle to overcome to make this product really work as intended.