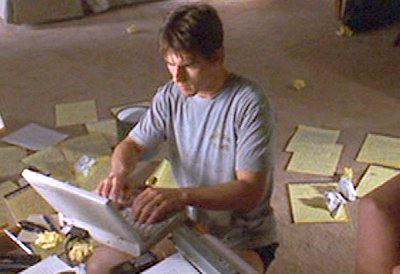 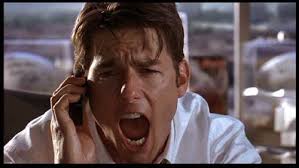 A sad statement I know. This movie turned up on late night television the other night and it reminded me of a situation I was in a bit over a year ago.

Now this isn't a Show me the money take off, but I still love that scene and needed the photo, for my own amusement. I digress
I was sitting at home, after a hellish day in the office, an occurrence which was happening not as rarely as it once had, and found myself writing. Lucky for the blogosphere I hadn't joined its ranks yet. I voiced all my opinions about the company, my role, the management, the different personalities etc.. put it all out there. I was writing an email to my CEO and MD at the time. Man it felt good, so cathartic, and I believed it made a hell of a lot of sense.. I was about to change my world. I was pumped, maybe it was the caffeine I'd had to ingest to get through it all, who cares? I was excited. Now in Jerry Maguire, he acts out, passionately, straight to the copy mart and goes a little crazy, luckily enough for me (as Jerry gets fired.. remember) I remembered a little advice I'd received as a young professional. Never send an email on emotion, anger or happiness, save it in drafts, read it in the morning, and if you still believe it, then all means, GO FOR IT.

All I can say is thank god. I re-read in the morning and WOW, what a lot of nonsensical, emotional, jingoistic, egotistical crap it was. Don't get me wrong, I believed in the underlying message, and still do, but wow the message was lost in lots and lots of words. Here's the kicker.. I still wanted to send the message, but not in that format, not to those guys.

I was lucky, I had someone I could talk to, someone who understood my company, my role and my feelings and the players I was talking about. I sent this person my email, and held my breathe for the response... was I talking from a part of my body polar opposite to my mouth or not.

Great thought... now remember I was writing to my CEO and MD, not sure if this is true of all people of this rank, however, my audience had to have their attention grabbed in seconds, or less to keep them reading, it had to be succinct enough to let them know what I was thinking and the benefits it held, and it should not be emotional at all (as that would stop reading, or at least reading with an objective viewpoint ASAP). I re-wrote a few times, and could not find a way to change too much. I tend to sometimes get attached to my work, and find it hard to change.

At 3am, it hit me.. (unfortunately this happens a bit to me) I had to start thinking like a recruiter, writing my ads for a particular person. Very effective I found.

I wrote a catchy title to the email, which I new they would read. Something like "A great way to improve profits". I wrote a short sweet intro. Then dot points I needed them to know, and of course what they would get out of it. Finally, there was a call to action! "We should do this, or with your support I would like to discuss more."

End result.. an emailed response from my CEO, with a phone call 20 minutes afterwards, some changes immediately, (I feel) an increased standing in the company, and a few more initiatives which changed the way the company operated.

Now this may seem like bragging, and maybe you are right, however, I thought it was an example of a way to use passion and communications to C level executives and get away with it. It's like your ads.. Grab attention, use the what's in it for them theory and finish with a call to action.

It continues to work.. hope this helps someone.