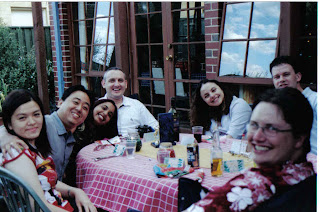 This is the time of the year where you catch up with family and friends, share in the news and fun that this season brings. You get to see some certain family and friends who you probably won't see for another 12 months, but you are still connected, and somehow the time that passes under that well used bridge doesn't seem to matter. You are constantly surprised at how much some kids have grown, to the point where some aren't even kids anymore, and wonder "how did I miss that?" I mean my 6 year old Flower Girl is not 16 for goodness sake.. how can that be true? Well hey, suck it up Dan.. it is.

Catching up with a whole heap of people can be wearisome, you know, making small talk, interacting, all that eating and drinking.. yummmmm. But also there are some people I caught up with, these people I catch up as regularly as I can, but I viewed them in a different light this year.

Is it condescending to say you are proud of friends? I sure hope not. I have a number of friends whom I can truly say have made me really proud to know them, and to have been part of their journey. It only hit me, when speaking with them over this festive season, and when it hit me.. it hit me hard.

I have known this guy for over 10 years. When I met him he was an international student here in Australia, coming out from Indonesia. English as a second language, and really learning the ropes of what it was like to live in Australia, a western country, weird customs and language. Lucky for this man he had already found the woman of his dreams, (whom he is now married to and has 2 gorgeous kids).

This guy was determined to etch out a future for himself (and now family) in this new land. He went through, Visa issues, (having to return home for a year or more, due to some administrative mishap), to working as a car park attendant, a toilet cleaner and various Sales roles. His focus and determination (only slipping with a slight foray into a pyramid selling scheme) have been amazing. He didn't lose focus of his goal/s and knew every step was going in the right direction.

His ability shone through. He is a engineer by trade, but a Sales person by passion. His ability to deliver results and relate to people have seen him ascend in his current organisation (after being headhunted back to them from a competitor) to the point where after only maybe 6 years in the Australian workforce he is being groomed to be a Regional Manager for one of the world's largest companies. How good is that? I mean this guy and I had discussions years ago about what life will bring him... is he wasting his time here etc. However through those periods of self doubt, that we all have you know what didn't wane? His ability, class is permanent!

I'm not sure if this is condescending or not.. it certainly isn't meant to be, anyways.. bottom line, man, I am proud of this guy. An unbelievable effort. Makes me second guess what I believe I have achieved. I like to think I am doing OK, but hey, tough to compete with that kind of growth.

Most of our parents would have presched to us all the value of hard work, dedication and loyalty. I will add focus, determination, patience, creativity and risk taking to that list of traits which will make you successful. That said, we all know people who have or may be higher up in their organisation, I just hope that everyone has the blessing to have in their life a success story like this to inspire you daily on what CAN be achieved if you want it bad enough.

Those who know me will know of whom I am talking, those who don't i hope for your sake you know or get to know people like this. (PS this is not to discount my other friends, I'm sure your inspiration will end up on these pages soon enough.