My career. Multiple screw-ups, and ONE thing I got right. 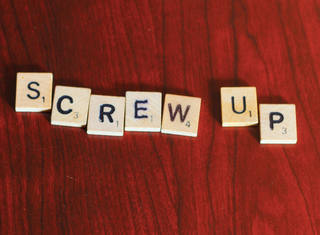 I have had some major highs in a career that is now deep into its 4th decade. Lots of hard work, lots of luck, and plenty of great people, have helped me to some success, which has been fun and lucrative. And I am proud of many milestones along the way, possibly capped by the IPO of Recruitment Solutions, a company I founded with two others.

I have also stumbled many times. Offices that have failed, business ventures that have floundered, poor decisions, a quick temper, bad hires, and a wide range of cataclysmic cock-ups, all of my own making.

But at least I have been smart enough to learn a few things along the way.

It’s a cliché, but clichés become clichés because they are true, and I say it with conviction, because in my case it’s based on hard-earned experience.

It’s all about the people you bring with you on the journey.

Any success I have had was anchored on two related themes. A healthy ego, which is big enough to mean failure is not an option, but not so big that I was scared to hire great people. Indeed, the secret I learned along the way, which I share with you now, is to hire people who are better than you at the jobs that you want them to do.

That is easier to say than to do, and everyday I see managers stunting their own careers by hiring people they feel they can ‘control’, people they keep fettered, sometimes even undermining them, because they feel threatened if someone shines too bright. That is a big mistake.

As a junior manager I thrived because I hired better consultants then me, and I rejoiced in their billings over-taking mine. I hired better managers than me (in potential at least), taught them everything I knew, and I learned, over time (because it took years to learn this), to let them have the room to do what they could do better than I could.

If you want to build anything of substance, it’s all about leverage. Leveraging the talent of others I mean. And that might sound like exploitation, but it most certainly is not. Not if you create careers and opportunities and development for the people you bring with you. If you create a great business and do that on the back of helping your people be the very best they can be, who loses?

As David Ogilvy the great advertising man said all those years ago;

Who do you hire? Dwarfs or giants?