The Best Recruiter Christmas Party. Ever! 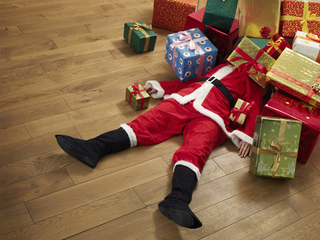 And I have been to a few.

No, not quite. But 35 years in this biz, and many years where I went to several parties, across various offices of the businesses I ran, means I have clocked up a myriad of Christmas celebrations. And for that matter Chinese New Year parties, Golden Week celebrations, and many other opportunities for crazy recruiter events to unfold.

Yes, indeed. From sedate canapés and sipping Penfolds at my first ever ‘Christmas Do’ at the Executive Search firm I worked for in Adelaide in the early 80s, to debauched riots, the like of which you cannot imagine in London in the mid eighties. The harbour cruise where the captain had to make an unscheduled stop to drop off the vomiters. The memorable accounting recruiter party where two revelers were fired for indulging in a sex act under a table. Although one of the fomicators was reinstated shortly afterward, because he was a big biller. I kid you not.

A party in Asia, which ended up at a nightclub, which seemed to contain only us – and 400 prostitutes! Christmas Dinner in a restaurant where the bill turned out to be $100 a head… plus $8,000 for damages. Even a party at my own house, where 60 recruiters, singing Khe San at the top of their lungs, were shipped off in a roar, in a hired bus at midnight, to continue proceedings in Kings Cross (Which shocked my prim neighbors to the core). And another, more sedate home party, which still ended up with a certain American recruiter being pushed into the pool. Remember that Deborah Musolff?

One memorable Christmas Party (the season of good will to all mankind) was punctuated by a vigorous fistfight, which broke out between the temp and perm team, half of whom were women by the way. That was ugly.

Parties where resignations were foolishly offered, and usually accepted on the spot. Parties where long-hidden love was rashly revealed, and many parties where unbridled lust was unleashed, often to be cruelly dashed, but sometimes warmly welcomed.

There are always exceptions and one really, really good one was in Sydney where the local leader broke the teams into groups with an esky of grog and a video camera per group, and sent them in different directions to make a short film, using the public as ‘cast’. I was the judge at the hastily edited ‘movies’ shown on a screen in a restaurant 3 hours later. Classic night. No Oscars awarded.

So, I have not always hated recruiter Christmas parties. I was front and center in the early years. Only when I became ‘the boss’ did they start to become a chore. If you are the boss, and you are even a tiny bit smart, you need to stay (relatively) sober (Shows how many non-smart recruitment bosses there are huh?) You also have to put up with an endless stream of inebriated recruiters bemoaning their salary, their colleagues, the database, the marketing budget, and much else besides. You even, on occasion have to fend off amorous staff members who for some crazy reason think that hitting on the boss might be a cool maneuver – although I admit that seldom happened to me, and not for many, many years. (Or was that in fact, ever?)

But there have been some great events too. Memorable, special parties that linger long in the memory.

And perhaps the best of all was December 2004, in Auckland, New Zealand

The company was Aquent, and I was the International CEO, based in Sydney. Our NZ office, under the leadership of one of my best ever hires, and still good friend Simon Lusty, had delivered a stellar year. From a loss of $80,000 in 2003, Simon and his team had turned things round and given us a $500,000 profit, which was most welcome I can tell you!

He suggested we treat the team, and he invited me to come over and help celebrate. I did, reluctantly, as I sensed another mundane Recruiter party in the offing, but I could not have been more wrong.

The location of the party was a secret, but that was a common ploy, and I suspected a restaurant or maybe some slightly more exotic location such as the Sky Tower. I dreaded an attempt at frivolity at a bowling alley or similar, and it was with some trepidation that I went to our office in Parnell, where I was advised to be at 4 pm

The mood there was upbeat, the normal Christmas hats, ruddy faces and Champagne on the desks. But still no one knew where we were going.

At 5.00 pm we were instructed to follow Simon. Expecting to pile into cabs, the first surprise was that we were walking. And so we walked through Parnell and down to the Auckland port (“Not another harbor cruise” I thought, dreading 6 hours stuck on a boat with some half-cut recruiter bleating about his bonus structure). But we walked away from the cruise ships and suddenly found ourselves… at a helipad! With two choppers already warming up.

Before we knew it, we were all jammed into helicopters, specially fitted with glass walls, and floors for premium viewing. In seconds we were banking over the blue harbour, past Rangitoto, over the harbour side mansions, and suddenly the lush green NZ country side was whisking past below.

I was stunned. Moments earlier we had been in our offices, now we were we choppering our way south of Auckland, all screaming with a mixture of fear and delight.

The choppers banked and dropped and before we knew it we were landing on manicured lawns outside what looked like a country estate, but turned out to be the classy Hotel Du Vin. Waiters were standing with champagne as the chopper doors opened, and we were lead into a magnificent dining-room with tables reserved side by side for our team. The meal was delicious, the wine stupendous, the revelry uplifting.

At 11pm we staggered out of the dinner, making our way to the waiting taxis. Except there were no taxis. Awaiting us was a giant, luxury stretch limo! And what a limo it was, with silky leather seats, fully stocked bar, and crucially, a massive stereo, with enough Abba and Grease to take us all the way back to Auckland singing and dancing (Yes we tried that in the limo too)

But before we got home, bladders began to weaken. People needed the bathroom, and we were in the southern suburbs of Auckland, which I will describe to you in three words. “Once Were Warriors”.

But pees had to be taken, and I will never forget the surreal experience of escorting three of our female staff through the car park of a pub that looked like it was in the bombed streets of Baghdad, past a group of massive tattooed bikers, into the toilets, while I stood ‘watch’ outside, trying not to look or sound Australian or South African, which I was pretty sure was not going to be to my advantage, or potential well-being.

But no harm came to anyone, and we piled back into the limo, watched by a small crowd of astonished locals, and made our way to Auckland city, where it was generally agreed that the night was young, and within minutes I found myself in the most bizarre nightclub I have ever been to, called ‘Boogie Wonderland’. The dance floor was Saturday Night Fever glass, all the music was from the 70’s, most off the people were from that era too, and clearly just exiting their second or third marriage, and desperately “Looking for Lurv”

Within moments our entire staff were on the dance floor lead by Simon himself, a man who is known to bust a mean move.

I watched for a while, saw one of our middle-aged recruiters accept a dance offer from a 20 year old, and decided that now was a brilliant time to leave.

The craziest, and best, recruiter Christmas party ever!

Hey! Seriously. 300 recruiters have signed up for this already (Yes, 300. Booked and paid). We are now expecting 750 total

And it’s only happening next year!

“Are YOU going miss out on the next golden era of recruitment?” Find out at my Australia and NZ speaking tour coming up soon. Huge ‘Early Bird ‘ savings. Nine cities. See you there! Book now.