Your next new hire could easily be sitting at their desk at this very moment, completely ignorant of your existence, or at least of your need for them. Recruiting passive talent has been part of staffing – especially for crucial upper-level positions – for as long as recruitment itself has been an organized effort. Some may cast aspersions on the practice, claiming that it reflects negatively on the image of the organization. If passive recruitment is practiced in a disrespectful or overly-aggressive way, then that could very well be the case. Done properly, however, it’s sure to yield the highest ROI possible for a new hire. 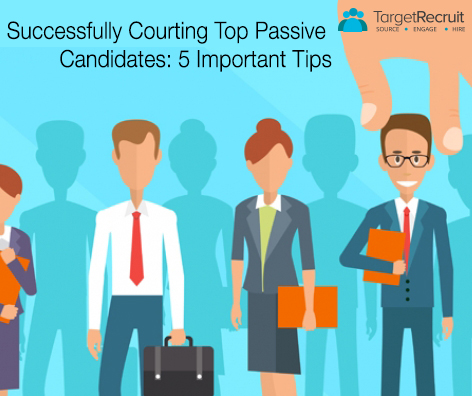 But how, exactly, can you navigate the process without being disrespectful of the candidate’s current position or having to offer astronomically higher rates of compensation?

Be prepared to sell the position.

From the first interaction you have with the prospective candidate, the value of the position you’re offering has to be clear. The conversation won’t last for more than a few minutes if it isn’t abundantly clear that the job is a stellar career move and that you’re offering a unique chance for the candidate to advance. Know the opportunity gap involved in the switch, meaning how much better is your position in relation to the role they’re currently filling. Think about the offered position in a structured way, knowing exactly what set of challenges are to be faced and what the requisite skills are that a successful hire needs to overcome them.

You should have a sense, before going into the discussion, of the concerns they might have regarding the position. If you can give a logical reason for continuing the conversation, most candidates will be open to it even if they initially said they weren’t interested.

Be aware of the networking value of a potential candidate

With the right approach, passive candidate recruitment can end in a positive relationship developing between both parties, even when the job match isn’t made. Keep in mind that someone who seems to be a perfect fit but really isn’t might be able to make an insightful referral. Basically, it’s unwise to be quick to end the conversation as soon as it’s clear that the candidate isn’t who you’re looking for. Note that they won’t make a referral if you haven’t previously established discussion protocol.

Work to establish a professional relationship

When you first talk to your passive candidate, get them to open up. Ask for a breakdown of their experiences, and offer a description of the opportunity after they’ve shared that background. This allows you to get a better sense of the candidate’s fit, and it showcases your professionalism and degree of engagement. Most candidates will respect confidence and spurn arrogance; in this early dialogue, you’ll want to be sure not to come off as the latter.

Maintain a position of leverage

As soon as a passive candidate accepts the offer, they’ve gained control of the terms of the conversation. You can convince top performers to take a job without a drastic increase in compensation if it remains clear that the job is rich in potential for growth. Ask them about places where it seems like your position could allow them to grow, set up the opportunity gap, and they can tell you further along in the process whether or not they’d be interested in leaving their current position.

Make the most of big data, cloud technology

One of the most powerful tools at your disposal is cloud-based recruitment software. Passive candidates might not be scouring the job boards, but most have uploaded their information to a database. These candidates especially are more likely to be open to recruitment calls. As always, finding the recruitment software that best fits your needs will maximize the efficiency and productivity of any HR department.

TargetRecruit Is An Ecosystem Of Staffing Industry Apps For All Aspects Of Your Business that can help a Recruiter or a Consultant perform to the best of his abilities and utilize resources optimally.