The Cartoon Characters of LinkedIn 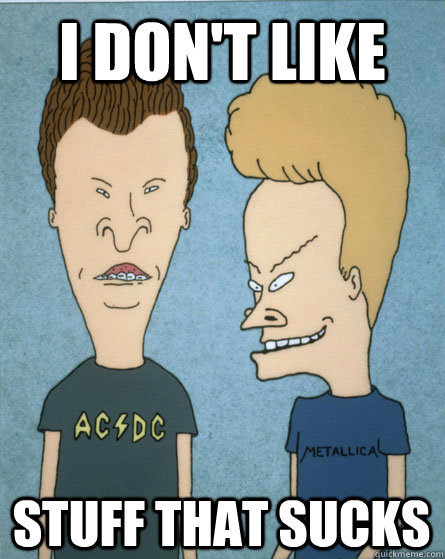 According to LinkedIn, there are:

…and among all these “registered members” there are 8 “real” people who go by the name Beavis Butthead.

Many of the Top 50 Cartoon Characters “judged for their influence, their popularity, and their hilarity” also have a professional persona as identified with profiles on LinkedIn! Here are a few of the Cartoonish professionals with profiles:

Charlie Brown: ~7 (but tough to say; I know a Charlie Brown and he doesn’t wear zip-zag shirts)

Fred Flintstone: 14 (there are a few real Fred’s around; and of course there are 2 for Barney Rubble)

Eric Cartman: 107 (but there are several real ones out there)

Speaking of Gumby, damn it I’m getting bored of this. You get the picture; I’ll leave it up to others to delve into other areas like Presidents, World Leaders, Hollywood characters (there are 103 Darth Vaders but only 12 Luke Skywalkers – guess the Force loses), Musicians (there are 43 Elvis Presleys), and TV characters (78 for Barney Stinson and 113 for George Costanza).

It all adds up to one incredible professional networking site.

This is a big deal. It’s big because we’re paying for you to create marketing programs claiming there are all these real members on LinkedIn when in fact that is a bold-faced lie. Plain and simple, it’s bait and switch.

LinkedIn – we’re laughing at you, not because we believe your entire product is a fraud but because your marketing is disingenuous. Every day you stay silent, every day another fraudulent person attempts to connect with us, and every day we’re forced to do the work of your Trust and Safety team, our opinion of you and your product diminishes.

Rationalize your member base; publicly state that the problem is a threat to the spirit of the product and that you’ll be going after those who create fake profiles and abuse the goodwill of the community. Don’t be afraid that Analysts will downgrade your stock or that advertisers will leave; they won’t if your initiative is about honesty and customer experience.

Do me a favor – reach out to me. Not a low-level professional but someone who can actually make changes. How aboutPaul Rockwell (@risk_yoda)? Stop hiding behind your painfully annoying “we take this very seriously” responses to us reporting fake profiles, and send in one of your executives to face the problem and work with the community that built you – recruiters.

Come in for an interview on RecruitingBlogs – I promise we won’t ambush you. We can work on a solution together.

Time for LinkedIn to man up and stop being a butthead…

OK, so you're trolling the Evil Empire, and you know I have to get in on the damn game. Rumor is $LNKD about to buy Cornerstone OnDemand $CSOD and become an "integrated talent management" (barf) play. If it's true, then @risk_yoda has to pay attention to this post.

That's some news there... What jumps out to me is the possibility that LinkedIn already has malware in its blood and integrating with talent management systems will only further spread viruses. But hey, Trust and Safety is working on it!

Newman, keep the first name blank but type in douchebag for the last name. Different story.

And please don't search for profiles with job title = cunt...

It goes on and adds up 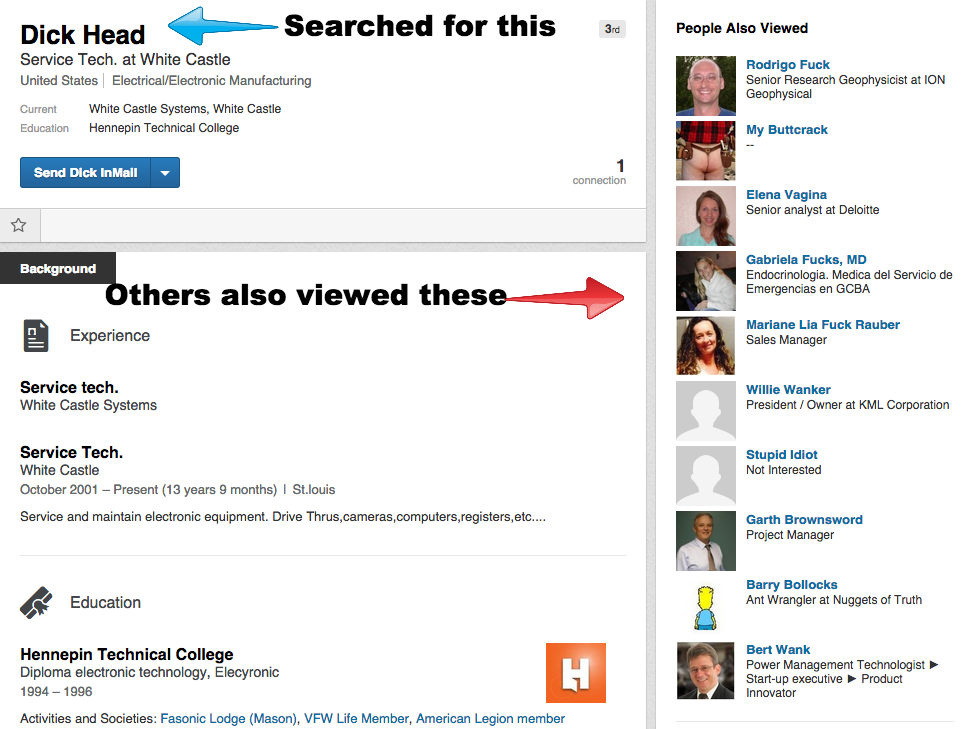 Does this qualify as a cartoon character? linkd.in/1HjJi5b

Seriously - My Buttcrack is a profile?  Even my 7 yr old knows that's not legit... wow - Nice job Steve.

The LinkedIners who have had the full regimen of Kool-Aid will point out that even though there are a boatload of fake accounts they are only a small margin of the total population... whatever that is. As I pointed out in one of those too-long Facebooks threads that brings out LI staffers ire, it's not about the numbers. The docile paying member remains silent and doesn't cause trouble. The flurry of fake free accounts causes big trouble! In one group with 6,000 members about 3.5% of the group members were fake accounts. Insignificant? Nope! On any given day as many as 50% of the posts within the group were off topic and selling pyramid schemes and work-from-home scams. The vocal few can dilute the whole population... and they do.