The Richard Sherman of Recruiting 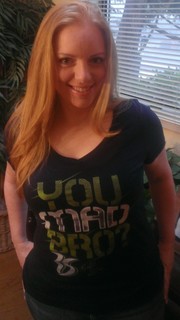 I love football. I mean I LOVE football. And not in that silly girly way, like I just watch it because I don’t want to be a football widow, or I want to impress my boyfriend or something. No. I LOVE FOOTBALL. There is something very hot about watching a bunch of big tough guys chasing each other around trying to rip each other’s heads off. I know, I probably could benefit from some therapy. And I probably enjoy football for very different reasons than my man. Don’t judge.

I also love the Seahawks. That would be the NFC Championship winning, Super Bowl bound Seattle Seahawks. I love them just as much as I hate the San Francisco 49ers. Which is to say, a lot.

So when one of my favorite players, Richard Sherman, pulled off the NFC Championship game winning play against Michael Crabtree of the 49ers with seconds on the clock, I was a little excited. Sherman was too, as evidenced by his sideline interview with Erin Andrews. Missed it? Check it out here. Just don’t watch it over and over again like I do, come back and read on.

Ahhh it was so pretty. It was a hell of a play and everyone knew it. We beat our chief rivals, won the NFC championship, and were headed to the Super Bowl. That’s a BIG FREAKING DEAL. So why was everyone so shocked when Sherman gave this little speech?

But wait, there’s more. Did you know that Sherman played for 49ers head coach Jim Harbaugh back at Stanford? Rumor has it that Harbaugh might have had less than flattering things to say about Sherman, costing him some draft love. As far as Crabtree, the receiver who was supposed to catch that ball? Allegedly the two had words at a charity event (a CHARITY event!) which prompted Sherman to promise he’d settle it on the field.

Obviously as a Seahawks fan it’s probably not surprising that I take so much pleasure in this… but more than that, I loved Sherman’s unfiltered passion. The interview was pure adrenaline – the words of a guy who’d just made a huge play and won his team a spot in his sport’s biggest game. He was pumped up in a way few of us will probably ever get to experience. I was taken aback by all the hate spewed back at Sherman. He was called “classless”, a “thug”, and some other not nice things.

I was flabbergasted. He’s a BALL PLAYER, people! He’s paid to chase people around a field and try to strip them of a TOY. He’s pumped up minutes after whooping his arch rival in the biggest game (so far) of his career, and people are so flustered by a little trash talk? I guess if he’d used bad words, threatened someone with bodily harm, I might understand. Here’s the thing though - corners, receivers, those guys are the trash talk playmakers of football. Quarterbacks are typically expected to be the role models – leaders of the team, setting the standard. You might find the occasional trash talking QB, but that’s not what they’re usually known for. Punters and kickers? Let’s just say if Human Resources is a football team, these guys are the admins. Not big on strategy, but they’ll get in there and do the work that needs to be done to score a point or three.

Recruiters, like my buddy Sherman, are the HR playmakers. It’s our job to get in the other team’s heads – how to pick off their top talent. How to beat them at the offer game. When it comes right down to it, I’ve said WAY worse about competitors I’ve beat in recruiting. Does that make me a bad person?

Eh, whatever. I’ll save it for the (placement) field. You mad bro?

Awesome post, Amy. Here's hoping the Hawks pull it out on Sunday - and that Pete finally gets that ring without getting an asterix, too. I think the whole Richard Sherman controversy was blown out of proportion, but then again, every time I hear his name I think of the Disney composer who wrote the score for Mary Poppins and all the other classics from the 50s and 60s. So maybe he's just the Richard Sherman of football.

Thanks Matt - IMO this is the best possible matchup - #1 offense against #1 defense - beloved veteran and possibly greatest QB of all time against the rookie (well 2nd year guy) who wasn't even picked until the 3rd round... it's going to be a great game. Two excellent teams - I couldn't be more excited. :)

Nice one Amy.  At first I was pissed at what Sherman said but then thought about how intense moments like that are and then you have to talk about it in front of a camera.  Crabtree disrespects Sherman and Sherman was redeeming quite a bit.  As for recruiting...you hit the nail on the head....

for all that he was pumped up it was one of the more lucid post game interviews I've seen in a while... lol and yet a guy like Beast Mode Lynch doesn't talk to the media and gets fined for it? ARE YOU NOT ENTERTAINED? :)

If Football were Hockey...it would be perfect.  I think the man was being judged very harshly for comments made in the heat of the moment....it's not like he was being judged for saying that someone with an AOL e-mail address was a Luddite or anything.  The man is paid for adrenaline powered plays...why should we think his mouth is immune to the same effects?  Mountain...molehill.  Who cares.....let play continue...

I didn't initially see this when I happened on TV, but when I watched the interview later, (based on all the buzz) I was expecting something extremely offensive (along the lines of a racial slur, f-bomb tirade or something). While I don't think Sherman's comments about Crabtree were exactly "professional" or sportsman-like, I don't get what all the controversy was about under the circumstances.

Kelly it's true - he called out Crabtree specifically, and not to say it's "appropriate", but understanding these guys have a history PLUS seconds earlier he'd tried to shake Crabtree's hand only to get pushed in the face. Literally. Should he have gone up to Crabtree in that moment? Yeah, probably not... but these guys wouldn't be in the NFL if they weren't fierce competitors. I watched it happen live, thought it was hilarious, and was completely blown away by the outcry. Crazy.

Aaaaannnd.....I really have no idea why he even apologized. He shouldn't have to apologize for anything. He made the biggest play of his entire life with seconds remaining and a microphone got stuck in his face with all the adrenaline rushing through him. Great post, Amy.....as usual. :)