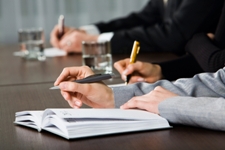 What is the most unusual thing a candidate has done in a job interview this year? Fall asleep? Disappear? Bring his or her mom? CareerBuilder.com released its annual survey of the most outrageous interview mistakes candidates have made, according to over 3,000 hiring managers and HR professionals nationwide. This year's Top 10 List includes:

employers were also asked about the most common and detrimental mistakes candidates have made during an interview.

In addition to the most unusual blunders, employers were also asked about the most common and detrimental mistakes candidates have made during an interview. More than half (51 percent) of hiring managers cited dressing inappropriately as the most damaging mistake a candidate can make in an interview. Speaking negatively about a current or previous employer came in second at 49 percent, and appearing disinterested ranked third at 48 percent. Other mistakes included appearing arrogant (44 percent), not providing specific answers (30 percent), and not asking good questions (29 percent).

The above blunders may be extreme examples of job seeker missteps, but hiring managers also make similar mistakes that drive away excellent candidates.

Interviews give both the employer and interviewee insight into what it will be like to work together. The above blunders may be extreme examples of job seeker missteps, but hiring managers also make similar mistakes that drive away excellent candidates. Remember that employed candidates are not desperate for a job and are often looking for a better opportunity than their current employer is providing.

Active job seekers often interview with multiple companies in the same week. Therefore, it is just as important for the people giving the interviews to be prepared as it is for the candidate. Familiarize yourself with a candidate's resume and background, be prepared with a list of targeted and general questions, and be strategic in the interview style that you choose.

This article was taken from CareerBuilder.com

Comment by Ambrish Kochikar on November 16, 2009 at 10:44am
Yup, these paths to failure have been tried and tested and continue to be the gold standard for unprepared candidates. Luckily, I haven't been at the receiving end of all of them. I haven't seen it all! :)

Comment by Kunin Associates on November 16, 2009 at 11:55am
Thank you for the cheerful comments!

Comment by Jacqueline Bozorgi on November 17, 2009 at 10:03am
LOL Tina, your experiences are so much more interesting than mine!

Comment by AYLIN on November 20, 2009 at 4:27am
And my tragicomics;
Candidate supposed that he was here for another company’ s interview actually he was wrong:)
Candidate bursted into loud laughter while she was talking about her last job and I was looking at her like a cow...
Candidate called us while he was on the way and, although we mentioned the location of our company on the job ad, he told that the way was so far away from his home therefore he would like to cancel his interview (peah!)
Candidate was chewing gum and blowing bubble
Candidate forgot to zip his fly (uppss!)
Candidate was smelling awful and I could not stand more!
One cadidate was late for the interview exactly 2 hours without any notification and apologise!!
I was offered a drink of wine by a candidate!!! (of course I declined the offer politely)