New ways to get new business in 2012 #recruitment

So cold-calling Employers for new business is less effective than it used to be and the recruitment consultant’s traditional markets are changing. If agency recruiters are now to forge new partnerships with the In-House recruiters at large Employers and develop new clients amongst the SME markets, how are they best to approach the task?

I think there will be 3 factors at play:

Get a snap-shot of where your 3 best candidates are. 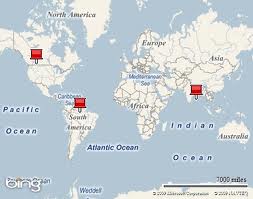 In an ideal world an Employer would open an application, input their job description and candidate requirements, press “Go” and it would produce a map with the 3 best candidate matches, their CVs, current locations and contact numbers.

Though it sounds great, there are some problems with this model: candidates would need to give their permission to…

Do you use a Sniffer dog or an Eagle.

So when the hunt’s on do you choose Sniffer dogs or an Eagle?

The traditional method is…

The 3 essential elements to building a sustainable recruitment sector.

The boom times of the last decade and the absence of client choice until now have enabled the agency sector to submerge problems which have only been exposed now the tide has gone out. These include standards of professional behaviour, placement inefficiency and uncompetitive pricing.

Recruiters need to find a USP and quickly.

I was recently reading how BT were warning their recruitment suppliers to not discriminate against disabled candidates (why would they in the first place if their client did not??) or they’d be off the PSL and it occurred to me how beholden Recruiters have become to their Clients.

Now that candidates are relatively easy to track down and recruitment is being taken in-house, Recruitment Consultants need to find a USP that will change the balance of power and stop the…

I don’t have much time for it and I’m no expert but I do get that others see personal and commercial value in it. The very fact that people may be talking about you or your business on it means you need to adopt some sort of position - don’t you?

However there are a…

If the Agency PSL is Plan A, what’s Plan B?

The PSL model has been the way that Employers manage their Recruitment suppliers for as long as I can remember. They remind me of medieval cities surrounded by moats!

The Russian sniper and the British spy…a modern tale of in-house and agency recruitment in a snowy setting.

I remember being told this story as a boy and it’s one of those that attached itself to my consciousness for no apparent reason… that is until today! I realise that it’s a metaphor for the struggle between the forces of in-house recruitment and agency recruitment. As with the story the outcome is by no means certain.

The story is set in the snowy Alps. The British spy (Agency) is being chased on cross-country skis by the Russian sniper (In-House). The Russian is faster…

A new trend emerging in the recruitment sector is the “engagement” portal. These offer Recruiters opportunities to engage with Employers.

They split into 2 models which can be broadly characterised as:

Tendering sites: e.g. http://bountyjobs.com which publish employer’s jobs and invite recruitment agencies to “bid” to work on them, and
Networks: e.g.…

The inexorable rise of non-agency recruitment is countered by a big “nothing” from Agencies.

When you spend every waking minute analysing the possible outcomes for the recruitment industry over the next decade and you have a brain so limited in capacity as mine, you end up hearing the old cliché ringing in your ears:
“You can’t halt progress!”

I believe this to be true and short of a post apocalyptic return to the Stone Age, which actually seems frighteningly more likely than it did a week ago, I suspect that In-House, Social Media et al will continue to rise…

My pet hates include: waste!

Give what you don’t want to someone who does – why not. Think Karma. Cooperate.

The supply of candidates to Employers by Agencies is rigidly controlled by preferred supplier agreements. So if you have say 100 Employers hiring within the Tech sector, you’ll have 100 PSLs. Now some of the bigger Recruitment firms may be on all the PSLs but it is likely that the 100 PSLs will each have a different line up of suppliers and that line up will be a… Continue

We all know that Employers that use Agencies adopt preferred supplier lists to manage the Agency situation. Idea being that you find some good agencies that you’re prepared to work closely with and you exclude the rest.

We also know that whilst this might work well some of the time, there are diametrically opposing forces at work that cause it to fail from time to time. These being: the need to keep the PSL to a manageable number, otherwise you’d be dealing with agencies all day long… Continue