Over the years I've experienced many companies who have successfully tapped into transitioning military talent pools.

Veterans need jobs and companies want to hire them. So what's the problem?

1) The language barrier:
Military occupations in many ways are similar to civilian jobs although civilians don't understand the military jargon and transitioning military unfortunately do not know how to… Continue

"Step 1: Get out of the fetal position!"

I am asked on occasion why companies talk feverishly about innovation but hardly ever (if ever) put solid innovation schemes into play.

FEAR is my answer. Pick whatever flavor you like:

Fear of failure
Fear of loss of… Continue

I've recently noticed the Cheezhead and HRSEO domains are redirecting to Jobing.

Well for those of you who compete with Jobing, all of the back links (aka Google Juice) your blog or site was giving Cheezhead and HRSEO are now providing the "CheezJuice" to Jobing, resulting in a healthy heaping helping of "… Continue

I've read many times over the years about job boards dying and also the contrary position of how they will emerge from this recession like the Phoenix, stronger than ever.. Yada yada yada..

Let's face it, there are a variety of angles to this story although I tend to side with the one who actually vote with their… Continue

Today is a day set aside to thank veterans for preserving freedom and to remember those who paid the ultimate price for freedom. I want to thank every one of my brothers and sisters at arms and also honor the companies who are hiring them as they come back home and into the workforce, not just today but every day.

DirectEmployers' Members who made the Military Friendly… Continue

In my post on Breaking the Cycle of job board dependency I shared some historical insight to our industry and I believe this video is the pretty cool compliment..

The guys at TweetMyJobs are… Continue

Jobs are FREE - The Comedy

Okay so I had a few minutes of fun with xtranormal a really cool text to movie site.. It's easy and a blast!

This is my "Jobs are FREE" attempt at comedy ;o)…

Is BumpTop the next step?

Even since seeing the movie Minority Report I've been patiently waiting for touch screen computing. Then Microsoft started teasing me with these incredibly cool Surface videos a couple years ago which about sent my… Continue

Breaking the Cycle of Dependency

In the late 90's job boards were a necessity, if you wanted to recruit online. Why? Because many companies didn't have websites let alone career sites. So if recruiting was to be done online it could only be facilitated through the job board, which started a cycle of dependency.

How did it become a cycle based on dependency?
Dependency was inherent in the process where companies would pay to ship their candidates to a community… Continue

My rant on PRIVILEGE

We have all noticed HUGE changes in workforce dynamics over the years comparing generation to generation. Well here's a little story, hiding a rather large rant, I thought I would share.

If you're a DirectEmployers Association member company and you haven't registered for the Annual Meeting...…

The internet has been experiencing a massive amount of duplicate job content over the past couple of years. No question this content has been used to help job seekers find jobs, unfortunately it has also been used to leverage traffic using duplicative content, extract job seeker information and create many other issues not… Continue

The year the media died

While sitting back and enjoying your morning cup of joe, take a few minutes and watch Terry Kawaja's "Madison Avenue Blues"..

Can your niche job board afford to take the top executives in the Nation to Pinehurst Golf Resort for an all expenses paid "Executive Golf Trip"? 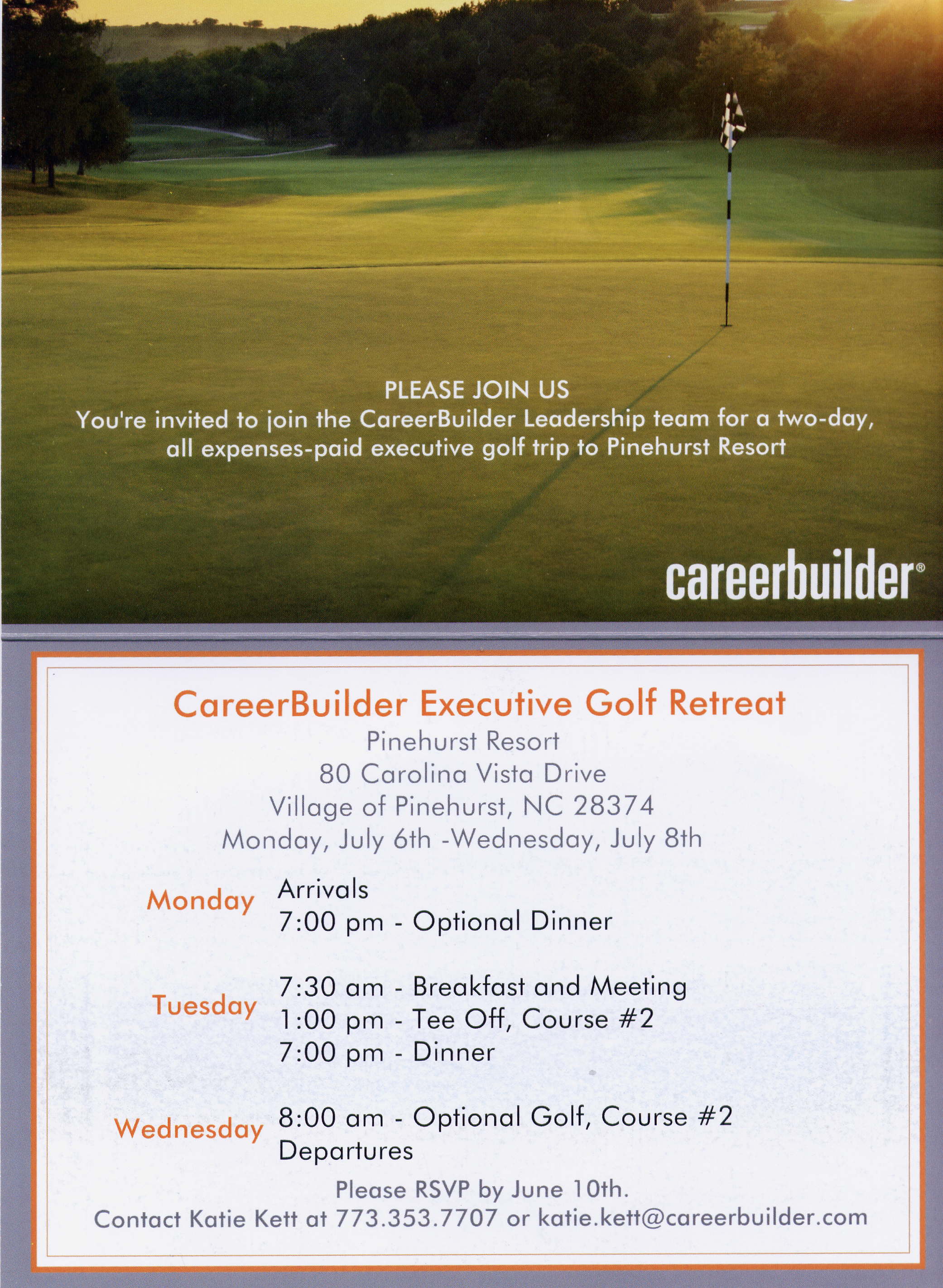 My Thoughts on Job Matching

I've been asked for consult on several occasions about whether or not to use job matching systems. Obviously depending on the system my answers will vary although if I'm asked about job matching in general here's my opinion.

Stand alone job matching platforms do not have a chance against the more traditional models, no matter the economic climate.

In a job seeker rich… Continue

The balance has shifted quite dramatically from a market dominated and controlled by talent to recession. Just a few years ago we were all asking ourselves what to do when the Boomers exit the market and how to address the coming void of talent? Now Boomers are competition in a talent rich and jobless market. Competition is high and the opportunity to separate yourself from the pack is sought after daily.