If you know me, not that it matters, you would know that I have never been a fan of conferences. None. I saw zero add other than draining my customers or my bank account. There was little that was innovative or interesting to me. I would go more in depth of why I started going to conferences but that is for another post I guess. This post is about #talent42, which #didnotsuck.

The conference motto for #talent42 was #willnotsuck and it proved from the very beginning that it was not going to. In my opinion they should have said #greatesttechrecruitngconferenceever but that probably would be too long for social media. This was in no small matter designed by the Recruiting Toolbox team. John Vlastelica and Carmen Hudson not only MC’d the show but their passion and their teams passion shined throughout the conference. This was their party and the lucky 250 people who signed up for this dance were going to be thrilled. What made it great? Well like I said if you know me…

First, location. Talent42 always takes place in Seattle. Since this is a tech recruiter conference and Seattle houses some power house companies this makes sense.  I had never been to Seattle before but I had heard the stories of rain and dreary weather conditions. While I was there the weather was brilliant. The conference was held at the convention center that is right on the water. Talk about a great view during the breaks!  The actual hall was both comfortable and computer friendly with multiple power strips. This was optimal for tech recruiters who are addicted to their computers.  You could hear the tapping of keyboards live tweeting throughout the conference. I guess since I was sitting next to Matt Charney and Amy Ala that was to be expected.

Second, speakers. This is, at the heart of any conference one of the top reasons you go to a conference. The lineup was spectacular. Nimrod Hoofien from Facebook, Gayle Laakmann McDowell Founder and CEO Careercup, Elaine Wherry Co-Founder of Meebo, and my pal Glenn Cathey SVP, Talent Strategy KForce just to name a few!  The full list can be found here Talent42. The speakers were there to educate and share. Most stayed after their talks and took questions directly in one on one conversations. I think that the conversation I had with Glenn and Elaine on the honey pot theory recruiting recruiters that she did was the most insightful talk I have had in years.

Third, sponsors. Sponsors are a necessary evil of conferences. Where else can you get recruiting products in front of 250 technical recruiters at once and for two whole days to boot?  Vendors always seems to be a downfall at conferences as the organizers add too many in my opinion.  That and I hate being sold too. I get enough of that at work. What I liked was the lack of vendors there. There was better quality then quantity.  Amazon, Recruiting Toolbox team, and Dice were the main sponsors this year. It was very interesting to hear what Dice is up to with open web from the CEO Shravan Goli. They are doing some pretty cool things with that tool.  Amazon did a great job hosting a happy hour AT the conference center (brilliant) showing off all their new toys.  Great giveaways were had from all the sponsors from an Amazon TV to Google glass, pretty cool!

Fourth, Originality of the event.  This is the part that I really liked. We ALL were in one room listening to the speakers. There was only one breakout session. The rest of the sessions were in the large conference room. I for one LOVED this. I get breakout sessions for the people who want to hear about this subject or that. What I HATE is that I have to chose. I usually feel that I missed out on something or someone I want to hear speak.  Sometimes it is the subject matter or it could just to hear THAT person speak. Even though the session I attend is always well done and informative I am annoyed that I had to miss the other one.  I know #firstworldproblems but hey this is my post. They did one breakout and it was smart. One for leadership the other for souring, I went to the sourcing session. It was all kinds of cool listening to some of the Sourcing Seven drop knowledge.

Another great idea was having audience interaction.  Carmen hosted the 1st ever Recruiter Jeopardy mash up with who wants to be a millionaire. With three contestants getting the answer and answering with a question Jeopardy style.  If they did not know they could the poll the audience or phone a recruiter.  On the last day they did they did the Tech Recruiting Best Practice Slam. This was the first time they tried this and it was great! Recruiters got to sign up and go on stage to talk about, well, anything recruiting related.  The audience could then vote on the performance or content. Heres @mattcharney starting us off: I even got up and spoke telling one of my favorite recruiting stories. Everyone who got up there received a very cool, made for talent42, poster. This was Lisa Amorao’s poster. She tried to get everyone that attended to sign it. I think she got quite a few.  John V. even liked the idea so much I think he is going to incorporate this yearbook style format next year. 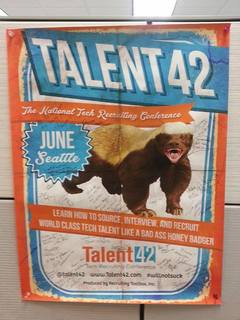 1st prize was a ticket to talent42 in 2015!! Now that is a cool prize.  So cool in fact that I wanted to win so I brought my A game.  If you are bored Amy took a video of my, umm, performance.  You can see it here if you want: https://www.youtube.com/watch?v=1Iy-nRAePUU&feature=youtu.be \

Lastly, there was the networking.  I got to FINALLY meet my awesome sister from another mother Amy Ala. Have conversations with heavy hitters in our industry like Matt Grove, Meredith Turner, Rob Dromgoole and Sara Fleischmen. I played at night with Jackye Clayton, Matt Charney, Ben Gotkin, Nicole Greenberg and Lisa Amorao.  Found a killer pizza place called Rocos downtown. I met so many people that I just cannot name them all.  I feel I was able to forge some pretty great friendships for the future.

So, here is my take away.  The conference, the people, and the city tossed together in a container and shaken not stirred in to an amazing event filled with great times, new friendships, and for me a ticket to next year’s show!  So like the kids say be there or be square!!! #truestory

Wow.  Thank you Derek -- I was going to write a post like this, but you nailed it.  We are so excited by the Talent42 community, and we love that the attendees get our jokes and don't mind the occasional irreverence or mention of dead hookers. :-)

I am especially pleased that you understand our approach to incorporating vendors into the program.  We think the days of ignoring the sponsors should be over.  We carefully cultivate relevant sponsors, and try to find ways to include them into everything that happens at the conference.  Gild, for example, gave a way a free trip (airfare, hotel, conference pass) before the event!  We also like to expose tech recruiting startups, like HackerRank to this audience.  And since we've now mentioned all of the sponsors, let's give a shout out to Jobvite (who gave away a Kindle, and paid for those mini donuts at breakfast!).

As for the speakers, it's perhaps the most difficult part of this.  It's hard to find leaders and practitioners, who are in the trenches, who have interesting stories to tell and who are great presenters.  We spend a lot of time on this. And the speakers spend a lot of time trying to get it just right.  I would say they were very successful this year.

Lastly, we always try to experiment with the conference format a little.  Tech Recruiting Jeopardy fulfilled my life-long dream to be a game show host.  If we do the Slam again, I would eliminate the live rating.  It seemed a little harsh -- I think anyone brave enough to go onstage and tell a story of failure or success (or both, in your case) deserves high praise, and I was grateful for all of the generous storytellers who signed up.  In the end, I'm so glad you won, because now we're certain we'll see you next year!  Thank you my friend for this wonderful write-up.

Oh - one more thing...we make the presentations available to everyone. View and download them www.slideshare.net/talent42

Carmen! NO THANK YOU for putting this conference on! I am glad the other vendors got a write up from you here. I was feeling like the post was getting out of control so I toned it down a little. I thought ALL the vendors were great! YOU rocked the house as a game show host (I think next year you should do family feud, corporate vs agency!!

I agree with you on the live voting being published in the back. I liked the idea of voting, hell I won, but it should be more private.

Once again! So fantastic.

Congratulations, Carmen. You couldn't get a better advertisement than that.

Very nice of you to say @animal! Thank you!

I second the endorsement.

Thanks Matt. It was great hanging out with you!! Every time I get hungry I think about Roccos...#SMDH LOL

Derek - thanks for making me hungry.