Amy Ala on The Recruiting Animal Show 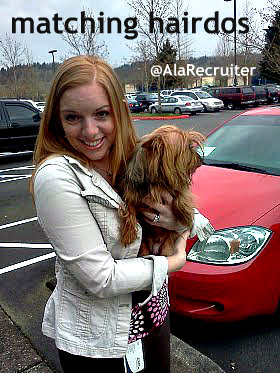 Amy Ala returned to The Recruiting Animal Show today and I thought it was a really good show.  We got into the nitty gritty of a number of really basic topics such as: What is sales? How do you start a call when the other person answers the phone? How do you approach a person on Linkedin?

Also on the show: I asked Amy if she used any of the cool tools sourcers talk about on Sourcecon Live. She gave us the blow by blow of her recruiting activities on Twitter. And she told us how she dealt with a candidate who wanted too much money.

Jerry hates it when I investigate the specific words that people use and doesn't mind saying so - loudly.  But, of course, he's wrong. Words are the foundation of our business and it's hard to know if you're saying the best thing so it's good to know what other people do.

Some of the callers didn't like the show. I think it was the relaxed tone that bothered them and, indeed, there was one flaw.  I thought that there were more take-aways than usual but sometimes it was hard to hear them.

I just listened to a bit of the show and whenever Amy tried to answer a question everyone on the line had to interrupt with their quips. Now, these are pretty funny people and I hate to discourage them but the sound isn't too good to begin with and it just made it hard to comprehend.

PS: There were a lot of good comments on Twitter during the show but I forgot to check Twitter so I missed them. (I'm not good at doing two things at once).

I'm going to listen now, I couldn't earlier. How could it not have been good when your guest was Amy?

I was only able to catch a portion of the show and it sounded good to me. Not sure what complaints there were, but you can't please everyone, every week. I do appreciate these re-cap posts though.