How To Respond To A Co-Worker Coming Out 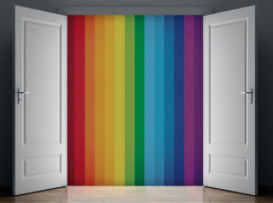 I want to start this post by saying that I’m so proud and excited about the response to my first post – Coming Out At Work. It’s really cool to know there are so many people who recognize that this topic isn’t getting the attention it needs. It’s also inspirational to hear from the people who go, “wait a minute. Why do you even need to come?” That means people are experiencing bias-free workplaces and that’s awesome. I’m lucky enough to work in one of those myself with the guys (and girl) of the RecruitingDaily Network. I’ve never been in a more accepting environment and I’m so grateful to all of them for creating that kind of place and letting me be a part of it.

Now on to the good stuff. Like I said, there were a lot of responses to the last post. I had plenty of ideas about where to take it next but thanks to Robin Schooling sharing my post, one just fell in my lap. One of Robin’s friends, Angela, posted on Facebook: So, if a coworker told me that she was gay or referenced her wife, what's a proper, considerate & professional response? Serious question.

I’ll disclaimer this by saying I’m just a gay person, not a gay expert. This is how I would like people to respond, take it or leave it.

The proper, considerate and professional response when a coworker tells you they are gay either by outing themselves (i.e. “I have a wife”), using a pronoun after playing the pronoun game (finally saying he or she, instead of they) or any other way that clearly tells you that they have a same sex partner, is with the exact question you would ask if they brought up that they had a partner of the opposite sex:

Oh, and what do they do?

Stop and think about that. Think about the last time you were at a barbeque (likely last Friday) and you met a new neighbor or friend. Think about the conversations and introductions. That's how straight people introduce themselves and it turns out it’s completely normal to do that with gay people too.

Now, to turn the tables, I get why you asked the question. It's great awareness and it's appreciated. You realize the other half of this equation might have some hesitation. Here's what a gay person (that’d be me) is typically thinking when outing themselves to you:

2)    This is a moment that I've probably anticipated and I'm about to share something with you that I maybe received a negative reaction to before.

3)    I'm sharing this with you because I trust you – whether inherently because I feel safe in that space or it's something we’ve built over time.

4)    I get it if you’re not instantly sure of what to say for some reason or another.

And #4 is why I’m blogging about it and would suggest the "what do they do" question - because it's normal. I think someday, there will be a more normalized reaction because gay marriage will be more normalized and hopefully recognized in every state.

My biggest mistake has been not to fully appreciate how hard it can be to "coming-out". One can be a bit naive at times...

Thanks, Katrina. ISTM that if someone lives in a very "blue" place (as my family and I do), you don't need to come out, and if you live in  a very "red" place (as where I grew up), it might not be safe to do so. How did you decide it was the right time and place?

I think for me, it had a lot to do with the trust element for #3. I think I also, after all these "coming out" opportunities, feel like I have pretty good instincts as to what someone's reaction would be and try to use those in the situation. I'm really lucky to say that I have yet to approach a really negative response.

This seems like a common sense and automatic response, but obviously is not the case often times. Some people I guess are negative and intolerant, but the ones that aren't might also want to ask or say things that would be totally things they might ask straight people but fear that it will be uncomfortable/insulting/non-PC. For example, I ask and discuss things with my younger brother (who happens to be gay) at the same level as my older brother (who's straight). But at times I have hesitated to make a joking remark on say Facebook to a former colleague who is transgender because I don't want to be offensive. Then I think, maybe I should because I wouldn't have hesitated before she came out. Hmm.

Keith, to your point - I lived in Oregon for several years which I think is considered pretty liberal. It still isn't accepted outright, the same way people react to straight people. Or mixed race couples, etc.